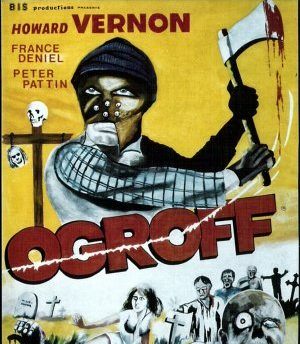 Here’s one extremely rare tape. I picked this up about a year and a half ago, and I haven’t seen a single copy since then- and this is the most “common” release. Mad Mutilator released by the French company American Video.

This is one of those super low budget films along the lines of The Abomination and Long Island Cannibal Massacre. It’s gory as shit, and sadly very few people know about it. I’m willing to bet it will never have a French DVD release, much less one in America. There are at least three known versions, the rarest being the first “Blood Zone” tape.

Another thing making Mad Mutilator so hard to come across is the source material. This release isn’t just a PAL VHS, it’s SECAM. Wait let me rephrase that, it’s French SECAM, an alternate format designed only for use in France that died out almost instantly. A standard NTSC VCR with tape conversion equipment will usually only be able to play this kind of tape in black and white, if at all. Bootlegs are available, but this major complication means they’ll probably look like shit.

Director N.G. Mount (Norbert Moutier) has only directed a few movies, and the only thing aside from Ogroff I even know about is The Syndrome of Edgar Poe. It’s an interesting movie with an interesting following, and it’s probably one of the coolest trash movies I can think of. If you’ve ever seen the slightly more popular Devil Story, then you know exactly what to expect.

You can check out my review here for more info.