Amy’s in the Attic Review 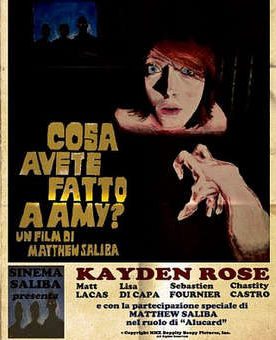 The Film– This tale of sexual debauchery begins with a group of friends partying it up 70’s style at the residence of their host, Alucard. After some banter on stamina and girth, a couple, Al and his girlfriend, decides to leave after being picked on. You can tell he really is sexually inferior by 70’s standards, because his V-cut shirt isn’t low enough to show a good amount of chest hair.

Trying to liven the mood a little, Alucard decides to play a little game. Each member writes their name down on a piece of paper, and the chosen person must play slave to the other guests. The result leaves the sexually overcharged Amy at the mercy of her friends. Of course the first request is to strip, which she gleefully does.

All the fun turns sour when the other women become upset with Amy’s flirty nature. After being commanded to crawl like a dog, Alucard intervenes. He pulls Amy aside, fits her in a dog collar, and gives her a blackface make-up job. The shenanigans eventually lead to Amy being degraded, raped, and something much worse…

I am a huge Matthew Saliba fan. I’ve seen all his movies, and every time he presents somethings, it’s always different and intriguing. Last time we had Frankenstein Unlimited, this time it’s a grindhouse throwback with sadism and comedy. Who thought those three things would taste good together?

The story is simple and the execution, acting, and editing are spot on. Kayden Rose is great as the abused Amy, and Saliba puts on one hell of a performance as the glaring, soft spoken Alucard. The aging affects are really good, and this is the first retro-throwback I have ever seen that uses a "spliced film" approach. You know when you get a DVD and it comes from multiple sources, so random spots have the original language with subtitles and the picture looks like shit? This film does that. Masterfully.

Borrowing tons of influences, Amy’s in the Attic pays homage to the giallo classics and even Last House on Dead End Street! It’s got an absurd style of humor that goes from stupidity (like one of the subtitled scenes showing the text "we’re out of here" and the actor says "chow, bitches!") to cruel humor. It all mixes with the look and sexy nature of the film to create an oddly uplifting atmosphere for a movie about rape and abuse.

This is my favorite film so far from Saliba, and that’s saying quite a bit. It’s got a unique vibe that’s a mix of sophisticated stupidity and sexual depravity- with lots of artificial print damage. It’s really one of the only films I’ve seen use the technique this well, mainly because of the "multiple sources" gimmick. I mean, that’s just fucking ingenuous. Combine the eye candy with a superb 70’s soundtrack (it has my favorite score from the 70’s, Morricone’s "Un Amico") and you’ve got one of the best short films I’ve seen this year. Plus, the twist ending makes it that much better.

The Package– The picture has been edited in post to have that rough, damaged look. Since it’s combined with lush colors and good cinematography, the film looks awesome. If you don’t dig that gimmick then you’re going to be displeased, but this is easily one of the best uses I’ve seen.

The audio is a mix between English and "Italian". Italian is quoted because it’s a half and half mix between the actual language and funny English nonsense. This trick sounds good in either "language", and the soundtrack, which, as I said, is a hit list of 70’s composers, sounds balanced and clear.

The disk also comes with three of Saliba’s earlier shorts: Pandora’s Paradox, La Fin de Notre Amour, and The Manipulator and the Subservient. There’s separate director and cast commentaries for each film, plus eight featurettes and a photo gallery.