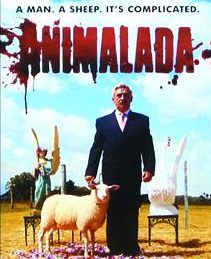 The Film- An Argentinian rancher, Alberto, and his wife live a quiet, simple life. The ranch keeps them secluded from the hustle of the city, and both enjoy the tranquility. Then, one day, a sheep escapes the pen and stumbles upon the front porch. At first sight, Alberto is instantly smitten with love.

The next day, Alberto makes the ranch hands leave the sheep, which he names Fanny, behind. He turns the barn into a cozy home for Fanny, complete with a blanket and, on occasion, a portable radio. After struggling with his urges, Alberto finally drops his pants and makes sweet, sweet love to his sheep.

Alberto’s secret life is exposed when he hears Fanny bleating one night. He rushes to her aid, only to find one of his ranch hands (who had been turned down by a few girls earlier that night) “raping” the sheep. In a fit of rage, Alberto kills the worker with a pitchfork, then grinds his body up with the grain machine. This wouldn’t be so bad if his wife hadn’t seen and heard everything that happened.

Of course she tells people what she saw… and they throw her ass in an insane asylum. Alberto’s son and daughter decide daddy needs some comfort, so they move in for a few days. After noticing their father acting odd every time the sheep bleats, they decide her presence is “too painful”, and plan to ditch her on the side of the road. Of course Alberto finds out, and sets out to bring his beloved back home. What follows is a horror show of murder, perversion, and inter-species marriage.

Gene Wilder can move his happy ass on over, because Carlos Roffé’s performance as Alberto is easily the best sheep fucker to ever grace the screen. Not only is he totally devoted and in love with this sheep, but he’s willing to kill anyone (or anything) that gets in the way. One minute he’s carving “A y F” onto trees (you know, all that high school first date hoopla?), and the next he’s feeding a corpse into a grinder to cover his affair. Seriously, Alberto here is one dedicated zoophile.

Animalada is a black comedy, point blank. There’s some blood here and there, but it’s power relies on the bizarre, not a body count. And what’s great is it works. It works really, really well. I was laughing my ass off during the entire movie. The unfortunate thing for you readers is that it’s almost all spontaneous with no build up, so I really can’t describe any of the scenes without ruining them. It all plays on the darkside of human nature, so as long as you like murderous, oddball explorations of the human mind, you’ll love this movie.

There’s a smidgen of social commentary thrown in here and there, but Animalada is just a silly, over the top film about a man and his struggle to hide forbidden love. I’m sure some people won’t “get it”, but I suggest you give it a watch. Imagine if John Waters tweaked Equus, made it into a film, and added a sheep. You get the idea.

The Package- Shot in 2001, Animalada really doesn’t have much going against it. Since it was shot on film there’s an above average amount of grit and minor damage, but no grain. The colors are lush, the contrast is great, and it’s pretty to the eyes. When you compare the quality of the film to that of the trailer, you can see how well the boys at Synapse work.

The Spanish track is well balanced and clear as a bell. Synapse has included some spot on subtitles to go along, but there’s no English audio. How can someone not be grateful for clear audio and quality subs?

Extras wise,all we get is the trailer, which looks like it was edited with Windows Movie Maker. It’s the official trailer (at least as far as I know), but it just seems kinda odd. Regardless it’s on the disk, which is one of the first things many DVD fans look for. With a movie like this it’s not right to call the features “lacking”, but I would have loved to have had more.