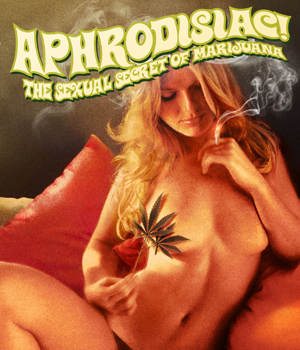 The Film– Set up as a mockumentary, Aphrodisiac begins with a description of what weed is and looks like, even showing us the infamous leaf (this job has since been given to the employees of Spencer’s Gifts).

After the half assed introduction, the film immediately begins to compare a cocktail party to a weed party. One couple from the cocktail party heads to their car for some fooling around, but whiskey dick sets in and the woman is left sucking on a tadpole.

While at the weed party, a poet and a writer begin to get their groove on (under a bizarre wall-mounted statue of an owl that looks like something the Aztecs would summon to kill David Carradine). Apparently the weed opened her mind, which means her orgasm is a thousand times better… or some shit like that.

Next, the cameraman begins walking around the street handing people joints and asking them questions like "do you know what this is?" or "how does it make you feel sexually?". The funniest thing about this segment is how people react to the American flag rolling paper the guy used.

The film changes direction again to explain the history of cannabis, it’s popularity in America, and the obscure fact that even George Washington grew the plant. I will admit, the history buff in me greatly enjoyed this part, because it’s always fun learning about the naughty shit this nations’ founders did. But Washing’s hemp farm is nothing compared to Jefferson’s "other" children…

Back to another testimonial about how fucking amazing marijuana is, a married man confesses his wife’s fear of having sex. Even on their wedding night, she didn’t want sex, and only put out when the lights were off. Well since this guy is in the running for husband of the year, he gives her some special cookies his friend baked, which turns her into a sex hungry monster. I find it funny that in this day and age, we would refer to such a drug as a roofie…

After some more arbitrary interviews (including Billy the Midget!), the final sex story is about an interracial couple who hook up while protesting at their college. This segment is PAINFULLY pathetic, because the "protest" is just the man and woman walking around five feet of sidewalk with cardboard signs….

After some weird shit like open heart surgery footage and ancient "cruel" aphrodisiacs like pepper powder and cock rings, the film ends with information on how to smoke (or bake) weed. It also simultaneously warns you that it’s illegal and you’re gambling 20 years of your life if you get caught with it, so this message is a wee bit mixed…

But the single most annoying thing about this entire film was the narrators. It’s God awful narration already, but since most slang for pot hadn’t been invented, about 99 percent of the time it’s referred to as grass. And they enunciate the hell out of it. "I never knew GRASS would help me feel this good during sex!" Everything sounds awkward and forced. I mean even my friend came up with a better description, "toke-a la bowl-a".

Seeing as how I’m not a big fan of smut, and I don’t mess with weed, this was a pretty hard watch for me. What enabled me to get through it was amount of pure fail that this film oozes. The actors, the cinematography, the soundtrack, the "plot"- everything is laughably bad. Maybe people who enjoy herb will dig this flick, but it’s not for me.

The Mono audio track is a bit gravely in some spots, but overall it’s not totally unbearable. It’s no where near as rough as the picture looks, but it does have a few hangs up here and there.