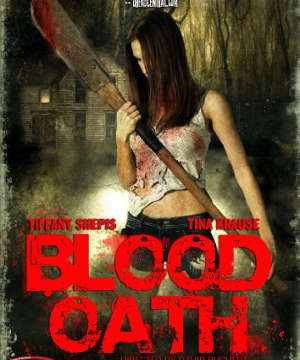 The Film- A couple heads out into the woods to fuck around, but persistent calls from the guy’s ex girlfriend, Beverly, kill all the mojo pretty much instantly. While he’s trying to talk her out of burning his Misfits albums, a psychotic madwoman (yeah, you heard that right…) ambushes them with a brush axe- making for the most pitiful looking beheading I have ever seen in any movie.

Turns out Beverly is out camping with some friends as well, and she’s just hooked up with the ex of her ex’s new girlfriend (does that make any damn sense to you). There’s another couple there with them, and they decide to tell ghost stories around the campfire. Because why not?

This could easily be one of the dumbest slasher back stories ever. In the 1950’s, the Krupps were a couple trying to conceive a child. One day, a woman dressed in all white appears on their doorstep, offering them an empty vial. She tells them both to fill it with their blood, then bury it in the yard- and this offering will ensure a pregnancy.

Well it works, and the Krupps have two twin girls. But the conniving bitch pops back up to take one for herself (because small details like offering up an infant to a possibly supernatural woman who’s into blood oaths and some other Satanic shit should only be discussed ex post facto). Of course the Krupps deny her their child, and flee in their car to the cops.

Along the way it crashes and burns, flinging one infant out of the window before blowing up. Everyone says the woman in white took the second child from the wreckage, who grew up into a hideously disfigured mongoloid. Legend also says she lives in a cabin in the woods within hiking distance of their current campground.

Well the next morning the intrepid group head out into the woods, where they meet a transcendentalist photographer who promptly becomes the killer’s next victim. Eventually they find the cabin, but it’s dark outside now so they have to stay the night in the house. God I didn’t see that coming…

So of course the house belongs to the killer, and of course she comes home and begins picking them off one by one. A few gallons of blood, a handful of plot twists, and the movie ends with the typical open ending that 99% of all slashers have.

Let’s start from the cover down. The first thing that annoys the piss out of me is that Tiffany Shepis is one of the top billed actresses on the cover, but she’s maybe in the movie five minutes. This irks me to no end, especially when low budget films do the same gimmick to pull in viewers by plastering Bruce Campbell or Jeffery Combs on the DVD cover.

Every aspect of the film is neither new or exciting. The quality is crap, the killer looks like The Ragman crossed with Leatherface, the characters are annoying to no end, and the effects are painful to watch. I’ll touch on the picture quality later, so on to the killer.

There’s too many TCM references to count, but the worst is the killer in this movie. She’s a fat, sloppy looking character with a stupid outfit that looks like several hobos remains sewed back together. By comparison, she makes Michael Myers from Rob Zombie’s H2 look as sharp-dressed as those mother fuckers on the cover of GQ.

This could be the most annoying cast since Grim Weekend (aka S.I.C.K). Come to think of it, this movie has quite a few elements from Grim Weekend. When your movie is comparable to Serial Insane Clown Killer, that sorta kinda spells doom. Everyone whines, is monotone, emotionless, and, worst of all, you’re unable to relate to a single one. By the end of the film, you don’t even care who’s been butchered or who’s still standing.

I’m dead serious when I say Blood Oath has the dumbest effect I have ever seen in my entire life. They literally used a photo editor for a decapitation. Yep, a guy’s head is severed and just rolls off his shoulders in beautiful 2D glory… And the practical effects (what little bit you see) are simple gags that make the “I’ve got your nose” prank look like something out of August Underground.

Dumb plot, dumb characters, dumb killer, and dumb effects. What’s worse is that Blood Oath actually has some decent plot twists, but everything was so boring that I just didn’t care. I’ve built this site reviewing obscure and bottom of the barrel cinema, but this is just too cheap for me. It feels like a shitty MTI Video release I would find while scouring Blockbuster in the mid 2000’s.

The Package- I’m going to sum the quality up as elegantly as I can- it looks like total shit. Everything is pixelated, dark, ad oversaturated. At it’s best it looks like bad quality VHS, and since it uses those retarded “day for night” shots, everything taking place at “night” is almost unwatchable.

Amazingly, the audio isn’t that God awful. It’s muffled and distorted in a few spots, but it’s actually not too bad. Now the soundtrack, however, that’s a whole different story. Ever heard someone on a Casio have a stroke? Yeah…

The best thing about this entire release is the extras. There’s a commentary track, tow featurettes (behind the scenes and special effects), outtakes, storyboards, the trailer, and some “Tromatic Extras” Not a bad selection, and easily the most interesting thing on the DVD.