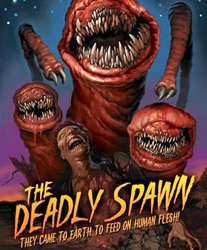 FILM– One night, a red hot meteorite crash lands in the woods near a small town. Two campers just so happen to be sleeping within walking distance of the crash site, and decide to head over to see what just slammed through the atmosphere. They discover that a very toothy, hungry monster has found it’s way to the planet, and after a midnight snack, it heads off to find breakfast.

After making its way into a secluded house deep in the backwoods, the creature waits in the basement for it’s next meal. That morning, the man of the house decided to head downstairs, and then gets munched. Curious as to where her husband is, his wife dillydallies into the cellar as well, and meets the similar gristly fate.

The now-digesting wife’s sister and brother in law are also staying the weekend. They want to observe their kid nephew, who seems to have an "unhealthy obsession" with classic sci-fi horror films. Their other nephew is a biology major, and since he believes his parents are gone of the day, decided to invite his friends over for some fun.

After proving himself sane to his uncle, the kid wanders into the basement dressed as a Dracula/ Apeman hybrid. He finds the creature, and sees it’s consumed his mother, father, and the electrification who was called out earlier that day (why the hell wouldn’t the power need to be fixed the day an alien killer invades the planet). While that’s bad enough, he also realizes it’s spawning fanged mini worms, which proceed to eat the leftovers (his dead mother’s face).

The friends show up, and then a group of random old ladies (the aunt’s friends) arrive for their monthly vegetarian dinner (irony!). With this many possibilities in the house, the deadly spawns begin to start their search for the next meal. With the creatures ranging in size from small worms to three headed behemoth, the house gets empty pretty fast. The teens realize they’re the only ones left, and with the help form the kid brother, set out to exterminate the ravenous beings.

This is a gore film, and that’s pretty much it. It’s got more redeeming values than similar movies like Violent Shit or Burning Moon- but not many. There are SO many useless characters in the movie that you pretty much sit around and wait for them to be ripped to shreds by the spawn, and when they are, it’s awesome. It’s not a highlight reel of gore, and does try to have a little story, but the filmmakers knew the blood ‘n guts was pretty much going to be the main selling point.

So, that means that you end up with essentially a slasher film… with large aliens eating people… It really play out like a by the numbers slasher (people are separated from the heard, then killed), but since it’s a creature doing the work, it provides for far more gore, which crates one hell of an entertaining film. Everything from faces being ripped off to decapitations- these aliens literally tear people to shreds.

The movie was a pretty powerful hit, inspiring everything form the shot on Super8 gore film The Abomination, to an unofficial sequel Metamorphosis. It’s easy to love this movie. The creatures are disgusting, and one of the coolest movie monsters of the 80’s. The effects are sickeningly entertaining (if not cheesy), and the kills are plentiful and graphic. If you just want to sit down and enjoy a gory, over the top movie, then you want this. It’s probably one of, if not the goriest movie in the Synapse library- and that’s the only selling point you need. 8/10.

PICTURE/ AUDIO– Here’s where the film takes a large blow. There’s now way of getting around it, the picture looks like shit. It’s presented in the original 1:13:1, so it’s windowboxed. Aside from that necessary downer, the movie was shot on 16mm, which does not age well. The contrast is way too soft, the static is heavy, and the dark shots are really, really dark. There’s not a scene where you can’t tell what’s happening, it’s just kinda hard in some places. It’s a cheap looking movie to begin with, so this isn’t really a big shocker. Synapse did what they could, and it looks significantly better than old Continental VHS I have (which humorously ran a gimmick that this movie was a sequel to Alien). 6/10.

The audio is decent, but again this was shot on borderline home movie equipment. Most of the dialog is easy to hear, but there’s many spots where you have to strain. The soundtrack has a nice balance, and the distortions aren’t too heavy. All issues aside, it’s the best the film will ever sound. 6/10.

EXTRAS– Synapse has included a boatload of extras here. It comes with the original trailer (which also used the Aliens sequel theme), three still galleries, two commentary tracks, an outtakes reel, cast and crew bios, an alternate opening scene, old audition tapes, a featurette about the awesome effects called A Visit with the Deadly Spawn, and a comic prequel with it’s own music. The comic is the best thing in this section, explaining how the creatures were genetically bred shape shifters that an alien race used as bio weapons. Everything on here is great, but that comic steals the show. 10/10.