Death of a Snowman Movie Review 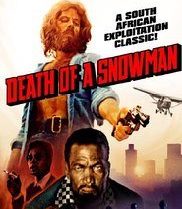 The Film– After a small time gangster is cornered in a parking deck and mowed down by a shotgun-wielding hitman, Lt. Deel and his reporter friend, Steve Chaka, begin to think this was no random violence. Chaka believes someone is cleaning the streets of filth in their small South African town, and mildly glorifies the murder in his articles.

Impressed with Chaka’s view, the murderers send him a letter. They go under the name War on Crime, and their mission statement is to eliminate all corruption in the city. They also promise that he will be notified when the next murder is about to happen. Lt. Deel and the police Captain begin to see Chaka as a sympathizer, and withhold information from him.

A few dead pimps and hustlers later, Chaka is invited to speak with the leader of War on Crime (who at this point goes by the name Mr. X). After claiming all the violence is to make a better life for the youth of the city, X tells Steve to head to a small airport tomorrow to witness their planned attack on smugglers.

Since the Captain at the local station is suspicious, Chaka gets a fellow reporter to sketch Mr. X, then faxes it to a different station. While they look into X’s identity, Chaka and Deel observe the airport execution. Not long after, a group of Chinese dope runners are executed by WoC’s most lethal hitman- a mysterious, bearded white guy with a revolver.

While Deel and Chaka are trying to uncover WoC’s leader, they find out their true motives are far less honorable than protecting the children of the city. The policemen can only find nicknames for Mr. X, like Snowman and Mr. Clean; but they do piece together that he’s a very influential person from Harlem that’s more dangerous than anyone could imagine. As the bodies pile up, Chaka, shunned by the local cops, sets out to bring Snowman down.

The action scenes are bloody and violent, just like they should be. It has that 70’s charm where everyone who’s shot flies backward and random shit blows up. The shootouts are fast paced, and the impressive camerawork combined with the erratic editing makes for some intense action. Also, it’s got some classic throw away lines, like when Deel looks at a shotgun victim and says “well he got a real blast outta this one”. The white hitman is one if the most interesting characters in the film, probably because he looks like 70’s Jesus with a snub nose. When you see him on screen, you know someone is about to die in beautiful grindhouse style.

The plot device of “reporter turns cop” is nothing new, but Death of a Snowman tweaks it enough to make it work. He’s not trying to find someone per say, he’s trying to figure out who they are and what they plan to do. Again I don’t get a full Blaxploitation vibe here- more of an exploitation-action feel. This movie has more to offer than films like Candy Tangerine Man and Willie Dynamite. While they are fun, this one is genuinely badass. Almost devoid of morals and chocked full of violence, this is one of the best action flicks I’ve seen in quite a while.

The Package– There’s the obligatory grit and grain, but the quality is great. A little soft looking at times, but all in all solid. Maybe this is just me, but the grit and damage makes this film. This is a genuinely gritty film in every way possible, and the rough look increases it. Exploitation films have that look to them, and if they don’t show their age, they don’t look right (hence why so many “Neo Grindhouse” films lay on the grime in post).

Snowman sounds good, but there’s a few issues. In a couple of places, the background noise totally drowns out the dialog. I can only recall this in two spots (and one was a guy spying with a microphone so it might have been done intentionally), but it was decently annoying. Aside from that, not much is wrong. The soundtrack is pretty fun too, and it’s balanced with the film nicely.

Supplement wise, we get just the trailer, which is as badass as the entire movie. Director Christopher Rowley gave this to Synapse after he heard of the film’s scheduled release, which is what caused the slight setback. Well worth it, because the trailer has added shots of a black guy wearing white makeup to frame everything up. First he points a revolver at the screen, then at the end of the trailer has a shotgun pointed at him, but it’s ridiculous amazing. This trailer is just so fun.