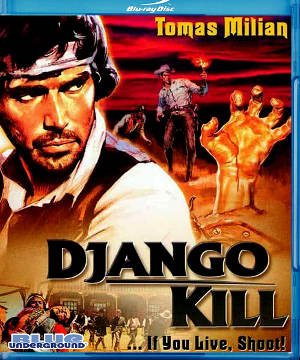 The Film– Following the successful robbery of a Wells Fargo wagon for an impressive amount of gold, the half-breed outlaw known only as The Stranger, his partner Oaks, and their Mexican and American gangs respectively, settle down to divvy the stealing out. Well Oaks and his gang have a sudden change of heart, and after making them dig their own graves, gun down The Stranger and his Mexican bandits. The outlaws then make off for the nearest town to cool off.

A pair of mysterious Native Americans wander through the area come nightfall, only to see The Stranger is the only man to have survived the massacre. After nursing him back to life, they find two bags of gold stashed under his vest. While he recovers, they smelt the gold into bullets “more powerful than lead” for his revenge. In exchange for their help, the Indians want to travel with The Stranger, since he has “been to the other side and returned”. When the sun rises, all three make their way to the nearest Town, which the natives call “The Unhappy Place”.

What they fail to realizes is Oaks also decided to make a pit stop at The Unhappy Place. After the bartender, Templer, and the town general store owner, Hagerman, realize the new visitors in town are a gang of murderous bandits, they do the only sensible thing- they rally up the town and butcher them. Not exactly the revenge epic it appeared to be, huh?

The only robber left alive is Oaks, who holds up in a store and begins picking off any vigilante who tries to get him out. Right on cue, The Stranger arrives and fills him full of, um… gold… But not enough to kill him. After the smoke clears, the enigmatic political figure over the town, Mr. Zorro (or Mr. Sorrow, everyone has a different opinion on it) appears. Zorro commands a squad of black-rodeo-suit wearing gay mercenaries who function as his private guard.

Wanting to extract info on other bandits in the area, Zorro orders the doctor to keep Oaks alive for questioning, but he’s promptly ripped apart when the townsfolk realize he’s been shot full of golden bullets. Zorro offers The Stranger a place in his guard, but he requests a room instead- planning to leave the following morning. During all the commotion, Templer and Hagerman were able to swipe Oaks and Co’s gold, and like any deal made in the West, someone comes out with a shitty end, which in this case is Hagerman.

As the night progresses, revenge, greed, and betrayal begin to stew among the major players in the town, and by morning The Stranger is drawn into a web of kidnapping, theft, murder, and… a gay rodeo-shirt wearing army. As the violence escalates and the bodies pile high, “Django” must use his golden bullets to escape The Unhappy Place in one piece.

Sergio Corbucci’s Django was a landmark film. Released in 1966 (just months before Sergio Leone’s classic The Good, The Bad, and The Ugly), with Franco Nero starring as the titular character, it easily became one of the most popular, and violent, Spaghetti Westerns of all time. So what happened when a film became popular in the 60’s-80’s? That’s right, illegitimate bastard sequels out the ass!

I could sit here and count off unofficial Django sequels all day, much in the same way I could with Caligula, Cannibal Holocaust, Last House on the Left, and many others. Hell, even Tarantino is releasing his own Django movie. But today we’re looking at Django Kill!, or as it’s known in some markets, …If You Live, Shoot. Released in ’67, it was one of the first bastard films to cash in on the original. So now let’s get into the Django-ism of it all.

Instead of Franco Nero as Django, this time we have Thomas Milian as, er, The Stranger. This is because director Questi planned to have the film released as Django abroad as a cash in, and keep the If You Live, Shoot title for the domestic release. So instead of a coffin-dragging gunslinger, we now have a gold bullet blasting gunslinger. And come on, who doesn’t like Thomas Milian? Almost Human is one of the best Eurocrime films of all time. The guy is one of the best actors of the era. And speaking of Nero and Milian, the two would go on to star in the fantastic western comedy Companeros- one of my favorite westerns of all time.

Within the first half hour you can tell this is no ordinary western. You plan for a revenge and “get the gold back” story, and it completely flips it into a series of interlocking sub-plots that are greatly appreciated. Keep in mind, this is coming from the man who would go on to direct Death Laid an Egg, one of the most bizarre Giallo of all time. There isn’t one aspect of Django Kill that could be described as “normal”.

The Unhappy Place and its inhabitants create the atmosphere almost instantly. Greed, murder, lust, and almost every vice you can imagine would plague a western town, these guys do it twice as hard. And their police force is a gay private army. As odd at this may sound, look back in history to the Greek Hoplites and your opinion may change. There’s an interesting amount of intelligence to the movie, and it’s in places you wouldn’t easily notice.

Known for the intense violence, which helped in making it one of the most infamous Spaghetti Westerns of all time, Django Kill could easily double as a horror film. The only westerns that up the violence here would be Cut-Throat’s Nine and Fulci’s Four of the Apocalypse, the later starring Milian in a much less honorable role. There’s scalping, hanging, a man being fisted through his bullet wounds for gold, molten metal mishaps, and gunfights out the ass.

Bad for me and good for the film, the constant changing directions of the plot make it impossible for me to really go any further and not give anything away. Django Kill …If You Live, Shoot is the second craziest western I have had the pleasure of viewing, coming in behind The Crazy Bunch (which stars George Hilton as Tricky Dicky, so I doubt that one will be topped anytime soon). It’s violent, surreal, and pseudo-minimalistic visuals, with the constantly crooked plot and strong character acting easily makes this one of the best and most unique Spaghetti Westerns. Strongly recommended, but those exclusively John Wayne fans should probably just keep on walking.

The Package– Blue Underground has treated the film to a beautiful 1080 HD transfer, with all the snippets of brutality and violence restored. Unlike most uncut presentations, these scenes blend seamlessly, and the entirety of the film looks beautiful. With virtually no damage and a healthy coat of noise, this is the way Django Kill was meant to be seen.

Both the English and original Italian tracks are presented in HD Mono and sound great. There are only a few minutes of lost English dialog, and this is replaced by the Italian track and English subs. There are also a wide variety of second language subtitles available.

A red and black colored version of the trailer animations opens the disk, which then mixes a beautiful animated menu with an altered theatrical poster. The pop-up menu looks and functions great, navigation is smooth, and there is a main menu jump-back option as well.

The most notable feature is Django, Tell!, which is interviews with director Guilio Questi, Tomas Milian and Ray (Living Dead at the Manchester Morgue) Lovelock. There’s also the original theatrical trailer, which is pure animation and feels, well, odd, and a poster and still gallery. Unfortunately, there’s nothing new, everything is from the older DVD release.