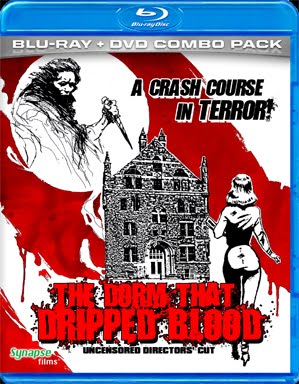 The Film– A hulking, condemned dorm stands ready for demolition. Joanne and four other Co-ed students have agreed to spend the Christmas break clearing out all the salvageable desks, beds, kitchen equipment, ect- but first they throw the building a "going away" party.

While the students party, a psychotic killer starts things off by hunting a guy through the bushes; before finally chopping him up. The party winds down as Joanne’s boyfriend and his friend, John Belushi, um I mean Bill Murray, um, "obligatory bumbling comic relief", head off for a weekend ski trip.

After the goodbyes, one of the students scheduled to help with the cleaning finds out she instead must go home for the break to be with her family. On her way out she swings by the roof to get the inventory list, but our mysterious killer has other plans. Her parents arrive, and when she becomes tied up with finding the list, her dad decides it’s best to go up and get her. He meets the killer in the stairwell, and he promptly introduces him to a nail-studded baseball bat.

After eventually dispatching of the entire family that night, everything appears normal the following morning… Except for the frizzy-haired weirdo, John Hemmit. He has been staying in the dorm since it was closed down. He doesn’t seem violent, but his lurky-ness begins to creep the students out. Resident prankster Craig lightens the mood by staging obnoxious practical jokes.

Joanne meets up with Jack Torrance, shit I mean Bobby Lee Tremble, a scrap dealer who’s buying the salvaged furniture. Aside from his creepy grin, too friendly demeanor, and almost vicious flirting, he seems likable enough. But the first day of cleaning doesn’t go without incident- the janitor finds his power drill missing. What tells me he’ll end up getting it back in an unexpected way…

After weirdo John scares the kids a few more times during the night, Craig and Brian make it obvious to him that he’s not welcome. After the confrontation, someone sneaks in and smashes the food that’s been set for dinner with the nail-bat. Everyone thinks it’s John, and since this would mark a violent turn in his behavior they call the cops.

Officer Neil Patrick Harris, damn it! Again, really? I mean Officer Lewis, yeah that’s the guy. Well he shows up, and gives everyone relief by claiming that a guy was just picked up by officers who fits Hemmit’s description. After the cop leaves, everyone heads off to their rooms. Their peace is interrupted when the power goes out, the phone lines are cut, and someone keeps stomping around on the roof…

Eventually the killer begins to off everyone left in the dorm using a pretty impressive range of implements, and of course everyone splits up to look for missing people, making it that much easier to narrow the population out. With pretty much everyone acting weird by this point, it’s only a matter of time until the killer turns the building into a slaughterhouse.

I wanted to find a copy of this film a few years ago when I was collecting the Video Nasties, and the only DVD available was the cut-to-shit VIPCo release under the title Pranks. I held out waiting for an uncut version, and eventually just forgot about the film entirely. Aside from the fact that I’m ecstatic Synapse has finally released a totally uncut copy, I’m equally as glad I didn’t waste money on a truncated version.

While The Dorm that Dripped Blood is not a particular gory film, epically compared to other banned slashers like The Prowler or The Burning, the effects are one of it’s strengths; as well as the pretty unusual instruments of death. Yeah knives and drills have been used often, but I can’t think of a straight out horror film where the killer has wielded a spiked bat. That’s actually pretty cool.

The effects are obviously cheap and done on no budget, but they look pretty good. There’s the standard dismemberments and hackings, but a majority of the carnage is done off camera- which is what makes it work. With this budget, they did the smart thing of showing the corpses instead of the murders, because it’s always best to have a gruesome victim than a shitty and laughably bad looking on-screen death.

There are a few people die at first, then nothing major happens for like an hour or so, and the movie ends with bodies dropping one after the other. This is not typical of slashers like Friday the 13th, so in that sense I can see people getting bored. I personally don’t mind it when movies do this, but if you like slashers because of the steady of stream of murder throughout, you’re probably not going to even give this one a chance.

I, like most others, think slashers are a genre only worth a damn before 1990. Anything market as a slasher post the 80’s will 99.999% of the time suck (with a few exceptions that actually are quite brilliant). The fact that a slasher will usually only be good if it was made in the 80’s has almost made them period pieces, because you expect a certain time and culture when you watch them. While there are some issues like a lackluster killer and infuriatingly stupid conclusion, in many ways it’s just fun to experience a true slasher for the first time in years.

Now the ending I just mentioned, well, it’s probably one of the best worst endings I’ve ever seen. I like how they tried to go against the grain and cliche, but god damn is this annoying. After the last line of the film, I almost expected to hear the "WHA WHA sad trombone" sound effect. Also, the amount of unintentional (at least I think it was unintentional) characters who look like other characters is as hilarious as it is idiotic. It’s something, it’s truly something.

Despite the flaws, I really enjoyed The Dorm that Dripped Blood. It’s a typical 80’s slasher that has very little originality when it comes to plot and execution, but it changes enough with the set pieces and weaponry to make it not just another by the numbers slasher. The killer is kinda obvious, the red herrings are violently thrust in your face, but I prefer that over the polished and unoriginal modern slashers like Scream any day.

The Package– This is one reason I think Blu-Ray is a misunderstood medium. The source print has sat around for about three decades, so if you’re expecting something as flawless as Avatar then you’re just stupid. Synapse has done a phenomenal job with this transfer, leaving print damage to a minimum and not ruining the firmness with overused DNR. There’s a mild to heavy layer of grain and noise through the entire film, but again what do you expect?

The audio is a pretty flat, but overall impressive 2.0 mono mix. It’s impressive in the fact that it’s been cleaned and is virtually void of anything other than minor damage, but it’s still a mono track. The quality weighs out the lack of balance in my book, because it doesn’t matter if it balances out if you can’t understand a damn word said.

Synapse is sticking with their pop-up menu in bottom right corner, changing up the font and design but keeping it overall the same as their other Blu-Rays. This design is easy to navigate, not distracting, and looks great. The menu text can be a little difficult to see during playback though, and I found myself exiting to the main menu more times than one to access the different sections of the disk.

There are two featurettes, My First Slasher and My First Score, with the effects artist and composer respectively. Also included are the original trailers for The Dorm that Dripped Blood, and the alternate version Pranks. As far as non-disk extras, this release comes with a pretty cool reversible sleeve showing the alternate Pranks artwork.