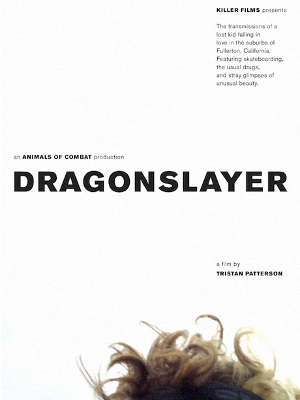 FILM- Dragonslayer is nothing more than a look at the life of skateboarder Screech Sandoval as he goes about his life. Sounds pretty boring, huh? Well it easily would have been, except Screech is not your average skater.

Homeless, jobless, and trying to be around his son, Sid, as much as possible, Screech is not exactly living the good life. A spell of depression that killed the desire to shred the streets forced all of his sponsors to drop him, resulting in no means of income at all. His old girlfriend, the mother of his child, dipped out soon after the birth, and Screech has been trying to get his life back on track.

Also, he lives in Fulton, CA. While I know diddly shit about Fulton (mainly because it’s on the opposite coast), things apparently aren’t too good there- unless you’re a skater. The economic failure has left many homes abandoned, and about 99% of them had swimming pools. To kill the boredom, Screech and some of his buddies clean out the much and turn the desolate pools into a mini skate park for the day.

After coming back from a metal fest, and subsequent failed skate competition in Sweden, Screech meets Leslie. An old friend from his dealing years, Leslie and Screech begin a relationship at the old skate park he grew up around. The relationship is a little deeper than it appears- at the time, Screech is living with a friend (who’s few sponsors are compensating the rent), and Leslie is trying to get through college to join the Peace Corps.

The following loosely tangled chapters deal with Screech’s relationships with Leslie, his son, his skateboarding, and his eventual maturity (at least to some extent). His lack of a job and constant smoking and drinking create friction with all of these, leading to the eventual “maturity” of one of the last nomadic skaters in the rotting California town.

Director Tristan Patterson certainly chose an interesting subject for his first documentary (and film for that matter). Screech Sandoval is at times loathsome, at times brilliant- but you can’t stop watching him. Essentially a real-life version of the caricaturized American Idiot kids from those edgy Green Day songs back in the day.

Before I go any further, I feel obliged to mention my history with skateboarding. In a nutshell, it was incredibly short lived and resulted in significant bodily harm. Even in the years following, I did enjoy keeping up with skaters like Mike V, Eric Koston, and Bam Margera. These were the skaters my social circle aspired to be. Looking back, most of these guys were pompous, arrogant, spoiled, whiney brats that had the big names behind them.

And now, probably close to six years since I stopped giving a damn about skating, I get a chance to see Dragonslayer. This environment is completely different- maybe because the town I live in only had a few big name skate parks, the kids idolized the superstars of the sport, or because Fulton is on the opposite side of the US. Regardless, this skating was completely alien to me.

The actual bits of the film that center on skating are incredibly well shot. The parks are run down, the pools are cracking and abandoned, and Screech is able to have the time of his life raising hell around them. His style is insane and completely unorthodox; mixing quick movements with spastic jumps and a very “wiggly” stance.

And now to the opposite side of the film, Screech himself. While at first appealing to the audience with his admirable skill and underground style, he quickly becomes an almost anti-hero. The skating competitions, pool parks, completely uncontrollable smoking and boozing, and almost neglect of his son quickly turn Sandoval into a poster-child for skate trash.

But like every good story, fiction or not, there is a transgression and redemption. Turning into an almost coming-of-age story, Screech begins to show attention to the things that matter- in his own way, that is. It’s not exactly a perfect transformation, but you see the wild spirit tamed by the conformity of society.

The settings go from picturesque to grotesque. The beaches and towns look like something from an E! show about Beverly Hills, but the rotten sides of town are almost surreal. Crude graffiti, parks, and characters, the skating sub-culture Screech is devoted to seems to be eroding away as the days pass. One minute you’re in The OC, the next you’re in a Harmony Korine or Giuseppe Andrews film.

It’s also worth noting the band packs a full bill or tracks from indie bands on the labels Mexican Summer and Kemado Records. I would be lying if I said I knew anything about them, but their music really fits the film. Ranging from a weird grunge beat to almost dreamy; this soundtrack will easily make fans with a prior knowledge of indie music fill with happiness.

An interesting look at how time changes everything, Dragonslayer is an almost tragic look at the benefits and curses of living the life of a skater in modern California. Even if you end up hating Screech by the end of the film, he will fascinate you throughout. You can easily blame his taming to society, the government, or just human instinct- but the journey to the end of Screech’s story (on film anyways) is unusual and quite often tragic.

He’s a bum, skater, and a father who’s trying to stand on his own feet, while simultaneously breaking his own legs. This is a fascinating look at the dying breed of social renegades who only need their six pack, baggie of weed, and skateboard. A culture that adds virtually no redeeming qualities to society and fucking relish in that fact. If you have a chance to see Dragonslayer, and are in the audience of people who enjoy films like it, I can’t encourage this enough. 8/10