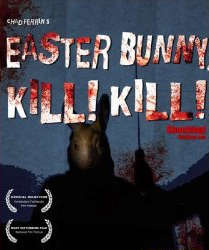 The Film– A petty criminal, Remington, robs a gas station on Easter Eve… while wearing an Easter Bunny mask. After hollowing out the clerks skull with a 12 gauge, he grabs a blood soaked chocolate bunny for his girlfriend’s (Mindy) son, Nicky, who has Cerebral Palsy. Nicky is obsessed with Easter, and, while taking out the trash after being bullied by Rem, receives a pet rabbit from a hobo who claims it’s the "real Easter Bunny".

Rem decides he wants to move in with Mindy, but knows Nicky won’t be so eager to have his abusive ass in the house. However, that night Remington finds the "Easter Bunny" in Nicky’s room, hidden from his mother. Seizing the opportunity, Remington tells Nicky that if he doesn’t act like he wants him in the house, he’ll kill the bunny. Knowing he can’t tell his mom about hiding the rabbit, he complies.

Mindy has to work late on Easter Day, so she leaves Nicky in the hands of Rem. As soon as she’s gone, he calls over his pedophile/ drug dealer friend to have some fun with Nicky. After scoring some coke, Remington goes on a hooker haul, leaving the crippled pedo to do as he pleases with Nicky. Only problem is, Nicky has disappeared from sight, and someone wearing Remington’s Easter Bunny mask begins to butcher anyone who sets foot in the house. A few disgruntled family friends, Gacy Jr, and even Remington and his bimbos encounter the mysterious killer Easter Bunny- but who, or what, is behind the mask?

There’s one thing I really hate in horror movie, and I hate it alot- when the killer is human and wears a mask that shows over half of the head. Friday the 13th, with the hockey mask, at least made Jason into an obviously superhuman and deformed character. Movies like Laid to Rest where you have a human killer with a good portion of his head showing really bothers me. With that said, I knew nothing about Easter Bunny when I received it in the mail, and the first scene gave me the impression if was going to be a leather jacket wearing, shotgun toting, dime store masked killer. Thank (insert religious deity of choice) that this is only the set up, and once the film gets going, it becomes a fantastic, comedic bloodbath!

After the first shooting (which kinda reminds me of Hobo with a Shotgun), we meet Nicky and Mindy. Nicky is supposed to be 16, but the actor playing him looks to be in his 20’s, around the same age as the Mindy character. When casting actors to play a child, it’s usually a good idea to have the actor’s age less than the parent actor’s age, not greater than or equal to. However, once the absurdity of the movie starts it never lets up, and actually adds tons of bizarre humor to the mix.

All of the kills are quite bloody and look great. the SFX look like something from a Plotdigger film, which is a huge complement. The killer looks really awesome too, donning the rabbit mask over a hoodie, covering that annoying back half of the head. The weapons are all pretty basic slasher fare- drill, saw, knife, ect, but the complexity of the kills adds that extra kick that really makes this a hell of a flick. I’m almost positive the scene with the child molester was an homage to Maniac 2, which was never finished and only exists in an obscenely rare workprint.

In short, Easter Bunny, Kill! Kill! is nothing new to the slasher genre, but it’s a great round of applause to obscure movies that not many fans have seen. Mix in the absurd humor and characters and this movie feels like if you mixed Hanger with David Lynch’s Rabits. It might not work for people who like really serious chop ’em ups like Friday the 13th or Halloween, but for people like me who can enjoy a goofy film that takes from decently rare slashers, it’s a blast.