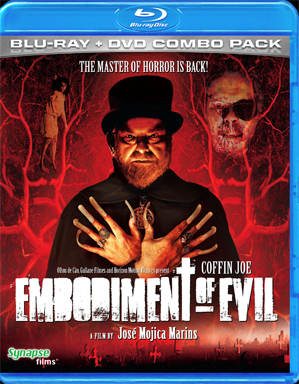 The Film– After the ungodly Coffin Joe sank into the murky pond at the end of This Night I’ll Possess Your Corpse, everyone thought his evil was finally over. As it turns out, he was only toying with the villagers, and rises up only to blind a police officer before being arrested and sentenced to the mental ward.

After serving a 40 year prison stint for his psychotic rampage, he is released from prison into modern day Sao Paulo. His hunchbacked sidekick, Bruno, meets him at the gates, where the two head to Joe’s new hideout deep under a flavela.

Upon his release, Coffin Joe renews his quest to find the perfect woman to birth his child- believing in only the continuation of blood. Bruno introduces four new followers to Joe, who after a test of loyalty, commands them to find potential candidates to bare his seed.

Meanwhile, a crazy police officer with a hard-on for killing "delinquent" children around the neighborhood crosses paths with the long-nailed demon. Joe slits his throat, but he survives and, along with his brother ( the cop who was blinded in one eye by Joe before his arrest) begin a crusade to take the boogeyman down.

The henchmen round up a few women for Joe, who he begins torturing viciously to ensure they are strong enough to carry his child. Some notable specimen include a eugenicist trying to unlock the key to immortality, and the relative of two really creepy blind women.

But everything is slowly falling apart for Joe. He begins to see hallucinations of his victims and has crippling nightmares, but after several baby-making attempts, he takes a mental trip to Purgatory and witnesses the personification of human nature, causing his mind to become damaged beyond repair.

As his desperation for a son grows stronger, the police get closer- and Joe’s depravity begins to increase in sickening ways. After being set-up and double crossed, Joe retires to his lair to torture his new captives in hopes that one may be strong enough to give him the son he so desires.

I had seen bits and pieces of the Coffin Joe films over the years (mainly thanks to the Something Weird mixtapes and IFC), but the only one that suck in my memory was the non-cannon Awakening the Beast. Since I’m an impatient bastard with no self control, I just popped the disk in anyway- and what came from it was a beautiful symphony of torture and insanity that will shock even some of the most jaded gorehounds out there.

So I guess the first thing I need to mention is that you don’t need to watch the first two films to understand or enjoy this. In fact, Embodiment of Evil kinda feels like it’s own separate film. I don’t know if it’s the color film or just the impressive SFX, but this is to the Coffin Joe films what Mother of Tears was to Argento’s Mothers trilogy- the only difference was it actually surpassed the originals.

While I’m on the topic of the first films, the flashback and hallucination effects are fucking genius. The flashbacks are in black and white, and the characters haunting Joe from his past are also in black and white, but nothing else. His mental demons are haunting, colorless apparitions that look creepy as hell.

Basically any event or character that wasn’t original to Embodiment of Evil appears this way, the the effect not only helps viewers new to the series, but it also pays enough homage to remind you this is a Coffin Joe film. Also, it makes for some insane visuals and atmosphere.

If the plot summery seemed all over the place I apologize, but there’s SO much happening at once in this film. Joe’s mental instability, his woman hunt, the back-story on the women he captures, the villains hunting him, the half a dozen subplots with other characters that all add up at the end of the film, and the flashback footage to explain the gap between the last film.

There’s not a single frame of filler- every second of this movie has something awesome and twisted going on. But the biggest, and easily the most memorable chunk of the entire film are the torture scenes. The absolutely gut wrenching torture scenes.

The first few gory bits seem mildly tame, but when the film is about an hour in, Joe and his followers just go bat shit insane and begin to fucking wreck countless people. Flaying, branding, suspension, crucifixion, and countless other things that I won’t even dare to spoil. This could be one of the goriest films I’ve seen in years, and if it didn’t have a little twinge of dark humor, this would be a very mean spirited movie to sit through.

I’m going to end this review with a quick section on my favorite scene in the entire film- Joe’s trip to Purgatory. This has got to be an homage to Karim Hussain and Mitch Davis’s film Subconscious Cruelty, and seeing how that is one of my all time favorite films, I was flipping my shit during the entire segment. It’s raw and brutal and gory and metaphorical and symbolic and just damn awesome in every possible way.

So how does the final Coffin Joe film weigh in to the series? I honesty have no clue. Again I’ve never seen either of the first two in their entirety, and what I did see has been ages ago. But what I can say is that as a film on it’s own, it’s damn near perfect. Maybe it’s just me, but I fucking love this movie, and I’m going out on a limb and saying this will be in my top five releases of the year.

The Package– A faint dusting of some digital noise here and there, but otherwise perfect. It’s a beautiful transfer with dead-on contrast and color saturation, and if you compare it to the Anchor Bay UK Blu-Ray, you can really see how great this disk looks.

The Blu comes with Portuguese 2.0 and 5.1 options only, so the lack of 7.1 might be off putting to some. I personally watch all formats in 5.1, so the crystal clear and well balanced track sounded great to me. As long as you don’t care about a 7.1 track, this is a solid audio release with flawless subs and a great mix.

While it looks a little too similar to the Vampire Circus Blu, Synapse has done a great job with the layout of this disk. A polished main menu, easy to use pop-up menu (will full mouse function), large font, and quick navigation make this a solid disk layout.

Synapse has included the original trailer, a behind the scenes making of (both included on the AB UK disk), and footage from the premier at FanTasia with the aforementioned Mitch Davis, Dennison Ramalho, and José Mojica Marins. Without any question, this is the best release of Embodiment of Evil to date.