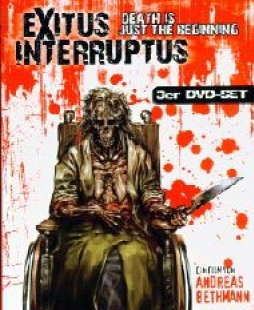 I’m a huge fan of Andreas Bethmann. Many people don’t know that name, but he is the pioneer of German horror distributor X Rated KultDVD. When not releasing the most appalling films ever made (Inferno of Torture, Vegetarians Forced to Lust, Der Todesengel), he’s out and about making them! Exitus Interruptus: Der Tod ist Erst der Anfang (or Your Death is Just the Beginning) is one of the more rare films in his filmography, epically the 2 hour hardcore cut!

The Film– Renee Pornero plays Manuela, the survivor of a sexual assault 5 years ago (the events of Vegetarians Forced to Lust Part 2). Seeking help from her social disorders, she begins to see a psychiatrist, played by none other than writer/ director/ X Rated Kult owner/ personal hero of mine Anderas Bethmann. After the first session, she goes clubbing with her lover Monique. In the clubs bathroom, a vicious killer attacks 2 lesbians, mutilating them in front of Manuela. He then kidnaps her, and brings her to his "secluded" old mansion. Obviously the psychiatrist, Manuela realizes her captor is the brother of her past attacker; and he has plans for her. Soon Monique, worried about her lover, receives a phone call, beckoning her to the sadistic killer’s "house of pain!"

The Package– Shot in 2006, I wasn’t expecting the picture to look bad. It doesn’t at all; in fact, it looks really good. Of course there’s no grain or damage (except the prologue which is digitally roughed up), but there’s some mild pixelation in the darker parts. I wouldn’t complain, but 7/8 of this movie are dark, so it gets annoying in places. The colors are nice and rich, and flesh tones look great; a must for a movie where blood and boobs are the only selling point.

The audio is sup par to say the least. Lots of fading and unbalanced effects. I expected some bugs, and got what I expected. Decently accurate subs are included.