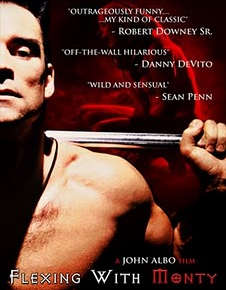 The Film– 29 year old Monty (or is it 36?) and his teenage brother Bertin live and exist in their industrial warehouse/ home. Bertin has the more traditional parts of the house, like the bedroom, and Monty has his gym. His unorthodox, metal-infused, hulking gym. With everything from barbells to a humongous hamster wheel, Monty is focused entirely on his form.

Bertin is a very deep, troubled kid. He has bizarre dreams about his Granny, conflicting ideas about religion, and a very high intellect. While Monty taunts him to "limber and tone his body", Bertin instead tends to his exotic pet and smokes his "ganja". While not in his gym, Monty loves to post adds in gay interest magazines, meet those interested in hooking up with him, and beat the shit out of them. He molests a blow up doll on occasion (while projecting pictures of himself on the wall to stare at during), and tries to contain Bertin to their abode.

Granny was the only guardian the brothers ever knew. While Bertin wonders about his mother and father, Monty focuses on his body and his job, which happens to be a phys ed teacher. Monty forces Bertin to write his papers to the Presidents Commission at school, hoping to one day attain the Head Physical Fitness position.

One day a nun collecting contributions (her cause is the prevention of nuclear dust, which will in turn warp human skulls and force women to lay eggs in marshes) arrives on the brothers doorstep, and after this visit both brothers are confronted with a bizarre obstacle. Monty is sent a mysterious "birthday present" in the form of a hooker , while Bertin is given a darker, more vengeful task to undergo. This leads to a dark clash between the brothers, and the grotesque fall of the vain Monty.

Plot- decently simple, two brothers collide after a nun visits them. Execution- bat shit insane. Flexing with Monty might have a plot that seems "normal", but at times it makes El Topo look like The Straight Story. Everything from Monty’s gym to Bertin’s pet is obscure and oddly sensual. There’s an unnerving amount of sexual tension in almost every scene, and some of the most disturbing religious undertones of any movie out there.

Flexing with Monty is, at it’s core, a comedy. There’s some drama and horror thrown in here and there, but Flexing is without a doubt meant to make you laugh (even the horrific stuff). In many ways, this film is just like a Greek tragedy. Monty is our tragic hero, and his vanity and narcissism are his tragic flaws. His downfall is inevitable, but you still feel some sympathy for him, despite his cruel ways.

John Albo is one damn good director- anyone who can make a fart joke seem sophisticated and metaphorical deserves respect. This was his first and only movie, which took him over a decade to complete. Every possible disaster affected this film, and it’s a miracle that it exists. The 90’s industrial-ness is there, which is a good thing because I’m sick of 80’s throwbacks (give me some more 90’s edge dammit).

A very deep and uneasy film, yet one of the funniest I have seen in years, Flexing with Monty is absolutely fantastic. It’s bizarre use of sexuality and religion might put some people off, but that’s their loss. It’s one you’re either going to love or hate, so judge for yourself. I loved it, mainly because it’s much smarter of a film than it looks, and it’s one of a kind (possibly one of the biggest understatements I have ever said).

The Package– Flexing was completed in 2003, but was not released until late 2009. Albo kept the film with him, so it’s a little rough looking. Filmed on 35mm, most of the picture looks great, albeit a tad gritty. The major flaw with the picture is during the reel splices, which stand out from the cigarette burns still left on the print. They really get scratchy, but not to the point of being a downer. It’s not the clearest picture, but it doesn’t look too bad- still, it’s pretty odd to see an overtly 90’s film look like a grindhouse throwback.

The audio is pretty clean, but it does have some problems. There is a good bit of background noise, but I did not notice this until I put the disk in my computer. When watched on my 5.1, it sounded fine. A little soft or crackly in some places, it’s not of unforgivable quality, epically for a film that sat on the shelves for a few years.

After hearing of this film and it’s dark past, I was expecting a good bit of extras. Unearthed has packed this disk full, and it is all quality stuff. An interview with John Albo (where he shows off some odd props from the film)- biographies for Albo, lead actor Trevor Goddard (who died during filming), actress Sally Kirkland, producer/distributor Carlos Guerra, and Michelle Zeitlin, the actress who played Monty’s birthday hooker- a written history on Flexing with Monty- a written film synopsis- a photo gallery- some Comic-Con footage from The Blood Factory panel (an internet series headed by Albo and Danny DeVito)- and some trailers. A very in depth and interesting selection of extras.