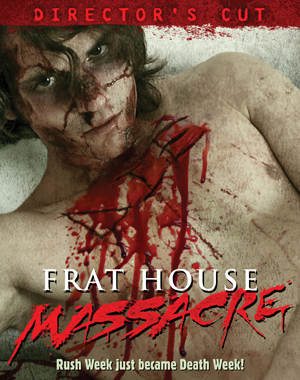 The Film– It’s summer break, and Sean can’t wait to get back to Newcombe University. Everything he loves is on campus- His girlfriend Erica, and his fraternity, Delta Iota Epsilon (???). The only thing missing is his brother, Bobby, who’s been accepted and will be attending the next semester. Sean can’t wait to bring Bobby into ??? with all of his frat brothers.

Well, things don’t quite work out as planned. Bobby is involved in a wreck that leaves him in a coma, and Sean is forced to go without him. Back on campus, things have, um, changed… The frat president, Mark (who reminds me quite a bit of The Rog from Devolved), and the other high officials have begun a sadistic hazing ritual for pledges- probably fueled by their new drug o’ choice, “Disco” (cocaine).

After a few pledges turn up “missing”, Sean decides it’s time he leaves the abusive frat. What he doesn’t realize, however, is that you don’t leave ??? alive. Mark and the other superior officers drown Sean with liquor, and then feed his body to ravenous pigs at a nearby farm.

The moment Sean dies, Bobby springs to life. Their guardian, Olivia, who has raised them her entire life, notices something isn’t quite right. Bobby’s reclusive, and seems almost driven to go to Newcombe- even after Sean’s “mysterious disappearance”. More interestingly, he wants to be a member of his brother’s fraternity.

Freshman year rolls around, and Bobby is forced to room with Michael, who’s planning on joining ???. He’s a special pledge though, seeing as Mark is his older brother. He tells bobby about a boxing match coming up between the pledges, and the winner has the highest chance of being accepted. Bobby decides this is his chance to get in, and signs up for the boxing tournament.

Well what Michael failed to mention was the rule about losers. If you’re defeated, the characters for ??? are carved into your chest with a box cutter by the winner. After defeating everyone and winning the tournament, Bobby catches Mark’s eye by demonstrating relentless brutality.

Two of the losers are in the shower following the match when Mark and his entourage enter. They “congratulate” them by leaving a bucket of power in the shower with them- under the instructions not to touch it. Well curiosity quite literally kills the cat, because as soon as they inspect the bucket, the water from their body hits the powder; setting off a chemical reaction that releases caustic fumes. The two burn/ choke to death while the frat bros sit outside and whoop in satisfaction.

One night, everything changes for ???. The meathead of the group, Moose, is fucking a girl in his room. A blacked gloved killer sneaks in, knocking Moose unconscious with a bat and stabbing the girl to death. When his friends see what happened, Moose wakes up and assumes his brother in the room was the attacker. After a scuffle, Moose falls against the radiator and rips his brains out on a metal spike.

Mark sends a few of the boys to drop the body at the farm, but after the killer strikes there too, only one returns. During the killings, Michael had let Bobby use his car for some “errands”. The survivor returns, covered in mud, and notices Bobby’s shoes are also muddy…

The suspicious rise when Bobby begins to say things that he shouldn’t know about. Things only Sean would know. He also hears Michael let some very interesting information slip about a car wreck the previous year. Things come to a head when ??? throws a coke-fueled disco at the house. Everyone wanting revenge decided to deliver- including the murderer. What starts out as embarrassment ends in bloodshed when the knife wielding, axe swinging madman begins the frat house massacre!

College themed slashes are nothing new to the genre, and 70’s throwbacks are also nothing new. Those are the two merits Frat House Massacre holds highest, and for the most part they work. Now this is not a perfect movie by any means, but its one hell of a fun ride. For every three ideas that work, one will fail badly.

First off, what’s going to hit you is the pure 1978 setting. I mean this looks authentic. None of that post production aging, no goofs by the filmmakers, and nothing forced or blatantly shoved in your face. The cars, clothing, settings, dialog, soundtrack (which I’ll get into later) and film stock give a fucking perfect 70’s feel that works because it’s not flashy or overdone. The only thing missing is pubic afros, but I’m sure most viewers can forgive them for that…

Also, be prepared for some great references to slashers. There’s an attack with a bat ala The Dorm that Dripped Blood (which expectedly it borrows quite a bit from), the ??? carving on the chest are akin to David Hess carking Krug on the girls chest in Last House on the Left, a dismemberment reminiscent of The Hitcher, and some Argento-esque lighting- and that’s just what came to the top of my head.

There are numerous references that work great, mainly because they’re not forced. The one thing I fucking despise about these retro horrors that are being pumped out now is the “hey everyone look I just referenced this movie” way they go about paying homage.

The best hint at an older slasher I can think if is in Hobo with a Shotgun, when the character Slick holds a wood saw in a way that references the poster for Torso. Everything in FHM is done in this way; nothing is rammed down your throat reference wise.

Now here’s where the film has problems- its two hours long. I don’t know many people willing to watch a movie for two solid hours, much less a slasher. Not only that, but the whodunit aspect doesn’t even start until 2/3 of the way through. Now there is tons of blood, murder, and perversion beforehand, but a film billed as a slasher should have roughly 15-30 minutes of story build-up, not an hour.

Now the plus side of this is rapid, one after the other kills. There are a few slashers that use this trick, leaving almost everyone alive then just massacring the shit out of the cast. Kinda like how Cropsy killed a few kids in The Burning, but everything kicked into full gear with the raft attack.

And yes, Frat House Massacre has an actual massacre. Despite almost every movie with “massacre” in the title having only a few kills (Blood Massacre, Naked Massacre, Mardi Gras Massacre, Massacre at Central High, and even Texas Chainsaw Massacre), FHM delivers a legitimate hack n slash bloodbath.

Now a few friends have commented on one element of the film that was off-putting, and it’s the obvious homoerotic nature. I don’t mean to offend, but the concept of a fraternity is pretty, um, gay. A bunch of dudes living together, probably showing your cock as part of the hazing, ect. I just saw it as a satire of the whole Greek system, and in that regard it was pretty funny. But the people who I was discussing the film with found it awkward and a little embarrassing, which is understandable.

The effects are a mixed bag for me. What’s there looks great, but it’s a little generic and repetitive. Mostly prosthetic work with some CGI blood spray (which you can tell is CG but looks good none the less), but only a few effects are truly memorable. I’m not saying it’s lacking or bland, but seeing someone get slashed or chopped for two hours gets a little old. Now the effects that do induce that wow factor are deserving and manage to freshen things up a bit.

Frat House Massacre is full of awesomeness, but the few flaws it has are severe enough to keep the sum from equaling the parts. One thing I didn’t touch on was the ending. Despite figuring out almost exactly what was going to happen, it did manage to catch me off guard, but was very displeasing as it progressed- another example of the previous statement.

If you can look past the kinks and flubs, it’s an enjoyable throwback that manages to entertain with blood, boobs, and humor. It’s worth a watch, and if you can ignore the problems, you’ll probably have a blast.

The Package– As mentioned, the movie is shot on a great stock. Shot on Super 16mm, the rough look and minimalist approach to grain and scratches gives a better retro look than loading the fucker down with pre-prod effects. Fantastic color correction, black levels are good, and excellent contrast. Frat House Massacre, on DVD, looks the same as 90% of the legitimate 70s-80s slashers also released on disk. That’s a goal more retro-inspired filmmakers should strive for.

The 5.1 Dolby track is clear and a great balance between music, effects, and dialog. Often with lower-budget films there is a noticeable fluctuation in sound volume, but not here. This is a damn good audio mix. Oh and about the soundtrack, it’s composed by Claudio Simonetti of Goblin! Of course it’s not ever going to compare to Phenomena, Suspiria, Dawn of the Dead, or any other film of the such- but it still sounds awesome! In all honesty, I think Simonetti’s score is what really drove home the 70’s vibe with me.

Synapse has included a commentary with director Pucci, and a separate track with the cast. Also added is a behind the scenes featurette (interestingly shot by various actors in the film) which is pretty fun, and a handful of deleted scenes. What’s there is good, but some interviews would have been much appreciated. Anytime I deal with a throwback film, I always love hearing the director talk about his source material, and since FHM did such a great job with it, missing interviews (and trailer for that matter) made this disk feel slightly lacking.