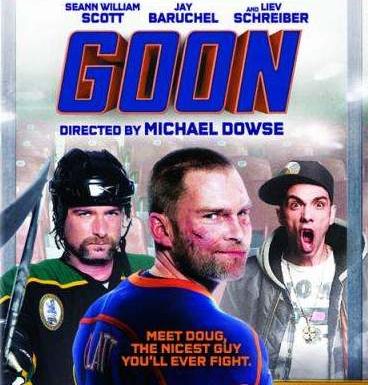 The Film– First off, let me say I know less than jack shit about hockey. I know you slap a little disk with a stick and try to get it past the big armored guy who left his machete at home, into a goal, and that’s about it. Oh, and there are a shit-ton of fights. Luckily I caught Goon at Actionfest this year, and festival director Colin Geddes gave a great introduction. A certain player, knows as either an assassin, thug, solider, enforcer, or goon, is designed to guard the little, quicker player while he gets goals. This also includes beating the piss out of people who try to interfere. So my understanding of priorities in hockey is now “fight, start fights, score”. And that’s going from highest to lowest.

Which brings us to Doug Glatt (Sean William Scott)- a bouncer in Orange Town, Massachusetts with some serious family issues. His father and brother are well-to-do doctors, and his mother is, well, a typical “what are you going to do with your life” kinda mom. The only thing going in his favor is that his brother is gay, which the parents aren’t too fond of. When he’s not throwing drunk and belligerent Massholes out of the bar, he’s with his friend Pat (co-writer Jay Baruchel), who runs an internet based talk show on hockey called Hot Ice.

At a local minor league game, Pat repeatedly insults the enemy team, especially the players in the penalty box. Well one gets pissed and decides to call him a fag in return, and since this is a sensitive subject to Doug, he’s not too happy. The player jumps into the crowd to confront Pat, but Doug grabs him, yells in his face “my brother is (epic slo-mo) GAY!” and proceeds to completely wreck the guy, even breaking his helmet with a headbutt. Pat refers to this beat down as a “face period”.

On the following Hot Ice, the coach of the Orange Town minor league, Rollie, calls in, impressed with his fighting skills against the opposing team member, and ask Doug if he wants to join as an enforcer. At the try-out he’s ridiculed for not being able to skate, but after he takes out half the team that shit quickly halts. Pat coaches his rink fighting skills by analyzing the tactics of the most infamous enforcer in the sport, Ross “The Boss” Rhea (Liev Schreiber). Doug quickly earns the nickname The Thug, and becomes a minor-league sensation.

Rollie pulls Doug into his office one day and explains a little problem he has. His brother Ronnie is the coach of a semi-pro team, the Halifax Highlanders, in Canada. There is a prodigy player, Xavier Laflamme, who was on his way to being the best player in the sport. Then one game, he is completely wrecked by an elbow from Rhea, giving him a concussion and total fear of going back on the rink. Then begins a series of scandals involving fuck tapes and drugs, and Laflamme is traded off to the Highlanders. Rollie wants Doug to join his brother’s team, guard Laflamme, and help get the team back to glory.

What makes this interesting is that Rhea was recently suspended for a dirty shot (which I didn’t even know existed in a sport where you can clothesline players and receive a five minute time out) and de-moted to his semi-pro hometown team, the St. John’s Shamrocks. The same league Doug just got in. That’s foreshadowing there, people. Anyways, Doug gets along great with his team, which included a pill popping goalie with an odd obsession with his mother, two “Chernobyl fucks” who keep insulting him, an annoying pep player, a captain who constantly reminds everyone he’s going through a divorce, and Laflamme.

In the course of beating the living fuck out of anyone who crosses the Hignlanders, Doug meets Eva, a girl with a boyfriend who slowly begins falling for Doug. After trying to actually play hockey instead of just fight, he is met with anger from Ronnie for costing them the game, drilling it home that he’s not a hockey player, he’s a fighter. This career alienates his parents even more, but slowly makes him feel at home with his team and the possibility of a relationship with Eva.

Amazingly Doug’s brawling has brought the team close to the playoffs, but also result in his suspension for a game. While wandering the foreign streets at three in the morning, he sees Ross Rhea in a diner and walks in to talk with his idol. The possibility of the two legendary enforcers fighting has been driving the fans crazy, and while Rhea admits respect for Doug, he also admits if there is ever a time their paths cross, he will “lay him the fuck out”.

The Highlanders edge closer and closer to a spot in the playoffs, and the unavoidable confrontation between the two “goons” becomes apparent. But problems with his team, his family, and Eva (he makes her “not want to sleep with a bunch of guys”) begin to wear on The Thug. With a chance to break the losing record of the Highlanders weighing solely on his shoulders, it’s up to Doug to beat the living shit out of everyone and lead the way for his team into the playoffs.

I’m sure everyone will believe that I pretty much only have the time to watch movies that are sent to me. Well once every year I break away from this routine and go to ActionFest, and I swear every time I go they have at least two movies that end up being on my favorites of the year list. This year was no exception, and as mentioned earlier, it’s where I first saw, and fell in love with, Goon.

With that said, who couldn’t love an action comedy with Sean William Scott playing a doofus of an ass kicker? The plot is your generic underdog story, with a nobody becoming a hometown hero, then becoming almost legendary. It’s been done countless times, usually with a piss poor execution. What makes Goon work so well is the amount of comedy combined with brutal, bloody fist fights. Like the first fight for example. There’s a slo-mo shot of Doug growling “GAY” into a guy’s face, then beating him to a pulp, then his friend exclaiming “face period”. If that doesn’t sound great to you, close out this tab and never come back. Or the whole goddamn browser, see if I give a shit.

Written by Jay Baruchel (his first full length film), who I’m sure most of you will remember from Knocked Up, and Evan Goldberg (Pineapple Express and Superbad) Goon does have a very “Superbad-ish” and “where the fuck is Seth Rogan” feel when it comes to the humor. Sex jokes, STD jokes, gay jokes, prostate jokes, a little twinkle in the eye of a guy recording his own sex tape- I think you get the idea. But the humor in Goon is much cruder, which might stump people when I say it feels overall more mature than some of the other films put out by the Superbad guys. I honestly can’t explain that though, just the impression it made with me. Maybe it’s because it doesn’t have Jonah Hill.

Some highlight lines are “no way you came out of there, you adopted”, “two rules: don’t touch my fucking Percocets, and do you have any fucking Percocets?” and ”I’m Goug Dlatt. Doug Glatt”. Yep, everything from fucking your mother to just being plain damn simple- Goon is fucking hilarious by any and all measures. You know, if you like that kind of humor. If not just go watch Dr. Zhivago and piss off.

The brawling is everything a good fight should be. Over the top, but not to the point where it becomes absurd, bloody, and on some occasions hilarious. This is no Shinya Tsukamoto, but you could easily call Goon “Halifax Fist” without letting anyone down. And keep in mind most fights occur because someone is running their mouth to Doug or trying to injure his team members, so expect some funny banter before the ass-kicking (“use your big boy words”). I hate explaining action sequences, so I’ll just let the screen caps speak for themselves.

With an action film or a comedy, you have three elements- the plot, the meat of the film, and the ending. With an action comedy, that gets compounded. This is not an easy film to review, because I can’t just sit here and list off every joke, analyze and explain every fight- it’s just not enjoyable to the reader. What I can say is if this sounds like a movie you might enjoy, you will. And if this sounds like a movie you would like to see, go ahead any buy it. By the time of getting around to this review I’ve seen it well over five times, and it keeps getting better and better.

One thing I do want to touch on though is the ending. Very rarely does a movie end satisfactory. It either ass-kisses the audience and ends all feel good and that bullshit, or just tries to be edgy and ends on a miserable note. With that said, and without going into any detail, Goon is one of the most complete movie experiences I have had in years. The ending is right in the middle of the spectrum, and very fitting for what we’ve seen up to that point. I don’t think there’s a single aspect of this movie that can, or will, disappoint you.

Goon is one of the rare movies that leaves you with a feeling of satisfaction overall. Its violence, humor, buddy-comedy, and boy meets girl elements all roll up into a highly entertaining and enjoyable experience. This is one of the best action comedies since Hot Fuzz, and that’s not something I would throw out there to any movie undeserving. If you can handle the complete incorrectness of it, there is no way in hell you will not love this movie.

The Package– The transfer is crisp, with colors popping (a lot of red on white, if you know what I mean) and sharp detail. Occasionally some of the background will blur out and become choppy, but this is just a minor annoyance and doesn’t happen often.

The audio track is a 5.1 Dolby track that sounds great. You can hear every face crunch, blood spurt, and “skull fuck your mother” joke balanced and distortion free.

One of the biggest features of the disk is Power Play, which is a playback option that breaks the flow of the film to show behind the scenes clips. These clips can also be accessed in the extras menu. There’s a commentary with director Michael Dowse and Jay Baruchel, about half a dozen deleted scenes (which are a must watch), an outtakes reel, HDnet look at Goon, an interview with Mr. William Scott (old Matrix parody joke, let’s see who’s memory I jog with that one)and Baruchel, the audition footage for Belchie the goalie, a Hot Ice clip called Fighting 101 that was used as promotion before release, and a slideshow of Goon hockey cards. There are also the green and redband trailers for the film, and a few Magnolia trailers thrown in as well.