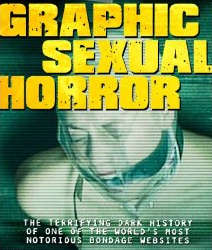 "Warning! Graphic Sexual Horror"- before entering INSEX, you had to pass this warning screen. Inside, PD had created a beautiful horror show. Women with needles stabbed through their nipples, held underwater in dunk tanks, rigged to orgasm machines, crying, bleeding, and loving it. It all began when Brent PD Scott (who describes his early experiences with bondage in the film) created his own Sado-Masochistic website, hoping to bring the subject into American culture. A former teacher at Carnegie Mellon, Scott left with this message- "if you won’t allow me to teach your children, I will corrupt them".

You see, documentaries are always a tricky thing to review, and Graphic Sexual Horror is no exception. In a nutshell, it’s a reminiscent on INSEX before it was hijacked by "Big Brother". Interviews include PD, other site workers (many of whom have started their own sites like Hogtied.com and Kink.com), the builder who made Scott’s visions reality, and the models. Tons of site footage (much of it never before seen) is shown, and the interviewees talk about the decline of INSEX, and how their experiences there affected them. As far as "plot" goes, that’s essentially this movie, but it’s much deeper than that.

Like I said, documentaries are tricky, because nothing is face value. I can’t describe how profound this movie is. From the naked body, bruised and crunched into a rusty cage, to the reason why she is there. It’s not just an interview, it’s an eye opening moment. The top reasons for being an INSEX model were sexual fulfillment, genuine sexual pleasure, or money, a gluttonous greed. It’s amazing to see one women remember the orgasms she received through the abuse, and another remember that she went on a shopping spree after her shoot.

Documentaries are designed to be eye opening, and when the credits roll, you should have taken something with you. Graphic Sexual Horror is one hell of a successful film. It’s enlightening, beautiful (one scene involving snow, and another involving singing were almost uplifting to me), shocking, and taboo. This film really shows human nature, and how pleasure is not the same to everyone. It’s sad to see the old set, with it’s cages covered in cobwebs, and the shackles strewn across the floor. The death of INSEX was not the end of bondage or violent porn, just the end of a man’s vision and hard work. That’s more disturbing than anything consenting people do for enjoyment.

The Package– The reason INSEX was so popular was the raw, rough look of their videos and live feeds. All the archived footage is presented un-altered, and the interviews are shot on a high quality camera. In short, every frame of this movie is fitting to its mood.

Audio is just like the picture. On the interviews, everything is clear and polished, but the website footage is rough and raw sounding. Screaming, crying, moaning, it’s all there- and it’s all super loud. Volume is not an issue here, and everything fits its on screen counterpart.

Synapse has included multiple deleted scenes including an alternate ending and alternate montage that are as chilling as they are amazing, additional interview scenes with the models, a featurette with co director Barbara Bell, and the trailer. The movie its self is a must own, and with these extras you’ll have no problem adding Graphic Sexual Horror to your collection.