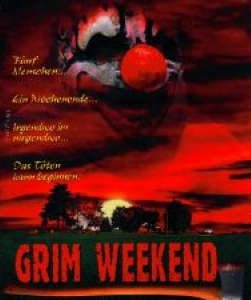 The Film– Office worker Brandon has been planning a weekend getaway with his friends in the woods; at a cabin his parents own. After putting an ass of a co-worker in his place, Brandon finally musters up the guts to ask Tracy, another co-worker, to tag along with them. She reluctantly agrees, and after they both rendezvous at his house, the two set out to meet Brandon’s friends; Mark and Susan. On the way to the cabin, the troupe stop at a biker bar (office workers in a biker bar, logical), and after a confrontation with the locals, they end up with a tag along hitchhiker, Denise.

At the cabin, the girls bond a little too quickly; and that night they all gather around the campfire to tell scary stories. After some pot and beer, Denise tells the group about a movie idea she has. It’s about a clown who murders a young girl, and is beaten to death by a vigilante squad. He comes back to life later that day, and begins to kill off the members of the squad. During the story, Brandon and Tracy sneak off to have sex, one of the most awkward sex scenes you will ever sit through.

The next morning, the group begins to find painted doll parts around the cabin and in the woods. In the fridge is a note; "you will regret this". They assume it’s Denise’s old boyfriend, George; but then they notice Susan is missing. Turns out she’s been captured by Uncle Billy; a demented serial killer who dresses like a clown and carries an axe. With the phone lines cut and the car dead, the group splits up to looks for Susan and a CB radio (Brandon knows his parents have one somewhere). After finding some corpses in the tool shed and the killer’s gruesome hideout, the remaining "friends" are picked off one by one; resulting in the dumbest twist ending I have ever seen.

This has to be one of the worst films ever. If you want to know how to put your film in IMDb’s bottom 100, then take notes from this one. The acting makes Troll II seem like There Will be Blood, and the effects are just raw meat and purple-looking fake blood. The characters are too eager to be friends, and gullible is an understatemen. Cinematography is thrown out the window, and all flashback scenes use this horrendous filter that makes the film look over-saturated and choppy. When that filter’s not in use, the film just looks like shit; blurry and soft as hell.

I have always liked this film in a weird kind of way. I saw it when I was 11 or 12, and it scared the hell out of me, which at that time was an easy thing to do. Even when I revisit this film, some things creep me out. The shed bit and the painted dolls hanging in the woods are unsettling to me, and I’m not sure why. Aside from some small set pieces, this film is pure garbage. I grabbed this X Rated Kult hardbox because I wanted to revisit a film that scared me when I was younger, and that’s the only reason I still like this flick. Unless you have a childhood memory of this film, I recommend you sear clear of it (unless you REALLY like bad movies).

The Package– Like I mentioned in the review, the film looks like crap. Super soft, blurry, dark, and choppy. It’s just a rip of the Lions Gate DVD, which is superior because it doesn’t have burned German subs like this one does. The exterior of this release looks fantastic, but the contents of the disk are just appalling.

Amazingly, the audio isn’t as bad as the film or picture quality. It’s soft and the sound track is annoying, but it’s not as bad as some shot on DV films like Ax’Em or Killjoy.

Aside from the hardbox packaging, we get a widescreen and fullscreen version (both with burned in subs), some behind the scenes photos, an unreadable slide show of the script, two trailers, and something in German that looks like it could be part of the script. Most of the extras are useless, and the only thing worth watching on the DVD is the trailer (which is pretty good, and has all the highlights so you don’t have to endure this abominable film).