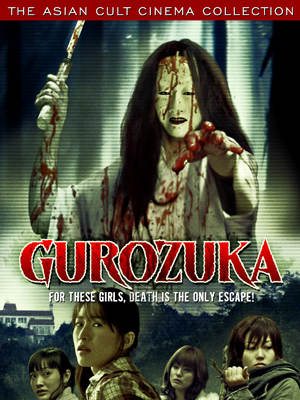 The Film– Maki and Ai have resurrected the Film Club (at their highschool I believe, it’s not exactly made clear) after a seven year hiatus. The last Film Club had one member go missing while in the woods shooting a film, and upon their return, another went insane and has to be institutionalized. While scrounging through the old club room, they come across a rather disturbing 8mm reel (but not quite as disturbing as the one Nic Cage found).

The two girls want to direct a film at an isolated lodge in the woods nearby, with the rest of the club being the actors. The actors consists of your typical “queen bitch”, Natsuki, and her two subordinates. Maki’s sister and teacher at the school, Mrs. Yoko, agrees to supervise the club at the lodge during filming. Maki is furious, mainly at her sister bringing her supposedly lesbian lover, Takako, along also.

Once they get to the lodge, Ai shows the group the footage her and Maki found in the old room (which suddenly has changes from an 8mm strip to a camcorder cassette). The video shows two girls in deigan masks praying and nailing a wooden doll to a tree (Blair Witch style), then one murders the other with a cleaver. Ai thinks these actors are the missing members from seven years ago, with the victim actually being killed and the murderer in an asylum.

Everyone dismisses the notion that the tape is a snuff film, but Ai and Maki reveal some disturbing news. The title of the film is Gurozuka, a play on the legend of Kurozuka, a demon who can take on the form of a beautiful woman. The story goes that she killed a gang of monks that found her room full of corpses she had fed on. The girls think the original Film Club was doing some demonic shit, and the murder on the film is completely authentic- the killer having lost her mind afterwards.

Then Ai and Maki unveil the plot of their little movie project- a remake of the 8mm film they found. They also planned to use the lodge because it is visible in the film, meaning the murder took place in the woods close by. Of course everyone is in protest, mainly queen bitch who “doesn’t want to wear a mask and hide her face”. Since she brought 99% of the food for the group, she demands the film project be changed to something a little more prissy or she won’t let anyone eat.

The next morning, everyone wakes up to find every morsel of food missing. The actresses think Ai and Maki stole everything, demanding everything be returned by noon or they would leave the shoot, but they think Yoko’s reclusive lover Takako is the culprit. Ignoring a confrontation for the sake of getting some filming done, they head out in two groups.

Maki and Ai go out looking for clues about the 8mm film and decide shoot a documentary, while the other three try to make an actual film (that ends up staring Natsuki and looks like one of those VHS you would see at a video dating booth in the 90’s). The horror buffs manage to find not only the little wooden doll still nailed to a tree, but the ceremonial murder site as well- with a freshly dug grave…

All the girls return back to the lodge as the sun sets, but Natsuki doesn’t make it back. And the food is still missing. And now every bit of luggage is missing too. After some harsh words, the girls watch the footage of Natsuki and realize someone in a deigen mask snuck up behind her, cleaver raised.

Something evil sulking around in the woods, and whoever or whatever it is, it’s wearing the exact same ceremonial robes and mask as the killer in the film. As people begin disappearing one by one, it’s up to Ai and Maki to figure out who’s killing their friends. Has the original murderer escaped, one of their friends gone homicidal, or is the demon Kurozuka not really a legend after all.

Um, I honestly have no clue what the hell I just watched. Gurozuka is a mash-up of Scream, The Ring, Noroi the Curse, and The Blair Witch Project. Some of these are for the best, and the others, well, not so much. The only bad thing about mixing the elements of all these films is that some clash, and I mean they clash hard. There’s also one more element I forgot to mention, and that’s oddly enough The X Files. The opening credits are incredibly reminiscent of the show’s iconic intro (with some sort of music track that I don’t think the human ears were meant to comprehend).

Oh and just pointing this out, if you’re expecting something brutal and gory like most of the other films in Synapse’s fantastic Asian Cult Cinema Collection, they you’re sadly mistaken. The most graphic image in the film is a slit throat, so gorehounds be wary. It favors the “J-Horror“ style more than it does buckets of gore. Basically just imagine Ringu with a moderate layer of blood.

The plot is fantastic, basically tricking a group of people into investigating a snuff film, and then something that looks just like the killer in said film begins picking them off one by one. From the very beginning that’s the set-up, and it sticks with it until the very end. The problem is, the payoff waits until the very end too. Instead of a rhythmic killing of the cast as the film progresses, it basically kills about half the cast off in one go, and nothing but the aftermath is shown.

Don’t get me wrong that’s not always a bad thing, but the finale doesn’t make-up for the extended wait in the least. Now the good thing is the wait is fantastic, at least for the first half. In fact, Gurozuka has an entertaining as hell build-up, but a very lackluster second half and finale. By using the “cursed videotape” gimmick, the film easily creates a creepy and ominous feeling in the same way movies like The Ring have done before, but the addition of a somewhat found footage aspect makes it feel fresh and not like it’s piggybacking on the success of films before it.

The snuff film is awesome, and reminds me of Noroi the Curse so much. It has very ominous and creepy feel to it. The ceremonial murder, the pale faced masks, the shitty video quality- everything comes together perfectly to create an atmosphere of dread and unease. Also the inclusion of the little Blair Witch doll (yeah I know that’s probably something in a Japanese legend and not where they got the idea) is great as well. The only real problem with this film within a film is that it’s better than the actual movie…

Even though I did enjoy Gurozuka, it has some glaring issues with pacing and teasing the fuck out of the audience. Ai constantly sees the deigan masked killer, only for it to be revealed that her eyes were playing tricks on her. The real killer only shows up in the last 15 minutes of the movie. When almost 80% of your scares are essentially “gotcha” moments, that tends to grind on you a little. I will admit though, the reveal of the killer is did catch me off guard. I very rarely guess those kinda things wrong anymore.

Even with the total anticlimax and pacing issues (mainly during the second half), Gurozuka is pretty entertaining. I really dug the creepy atmosphere and the use of videotape, but the constant “jus foolin” moments and downtime began to wear on me. With a set-up this good and results that are slightly above mediocre, Gurozuka is a disappointment. It’s got its moments, and they are good to say the least, but by the end you’ll be detached. 6/10

The Package– Gurozuka was shot on what I presume to be pretty nice DV equipment, but does have a problem with some of the darker scenes getting pixilated. And there are a lot of dark scenes. Other than that there isn’t an issue, the textures are sharp, colors are crisp, and everything looks great.

The film comes with the original Japanese audio track and optional English subs. The track has nice balance, and the subs are easy to read and free of error.

There’s a pretty entertaining Making Of featurette where the cast and crew talk about the freezing cold and flu that plagued them during shooting. Also included is the trailer, which is pretty much a highlight reel for the film.