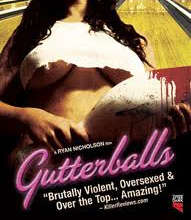 The Film– This fantastic throwback to 80’s goodness begins with two rival teams bowling as a means to settle a long argument. One team is Steve, a foul mouthed jackass, and his idiotic cohorts AJ, Patrick, and Joey. The other team consists of Lisa, her boyfriend Jamie, and all their friends (including some preps, alt kids, and a cross-dresser). The feud started when Lisa left Steve for Jamie, and he’s been furious ever since. After Steve’s posse manhandle Sam, the cross-dresser, a brawl breaks out, resulting in Steve getting roughed up pretty good. The janitor of the bowling alley kicks the kids out, but they agree to return tomorrow at midnight to settle the score.

After everyone leaves, Lisa heads back to get her purse, which she forgot inside. Turns out Steve and his gang didn’t leave- and with the janitor using a loud floor polisher, no one can hear her scream. All members of the gang rape her, and Patrick, the "weakest" of the group, is forced by Steve to violate her with a bowling pin. They leave her there, and drive off laughing.

The next night, the teams arrive for their midnight match-up. Lisa acts a hostile towards everyone, and disappears after leaving to go to the bathroom. Patrick follows her and also vanishes. Steve now has two bimbos hanging all over him, and the teams begin their match. Once everyone is locked in, a mysterious player, BBK, appears on the screen. During the match, people who leave the group are dispatched by a mysterious figure. It wears a bowling ball bag on it’s head, has sharpened pins, and bowling shoe garrotes. But who is BBK? and how come when someone dies, his score card gets a strike?

This is Ryan Nicholson’s second full length film. His debut was the short Torched (a pretty rough rape revenge film), followed by Live Feed. I was on IMDb one day about two years ago, and a user was posting that he wanted reviewers for his film Gutterballs. I got my copy, knowing nothing about it, and loved it. Since then, I have seen this film over 20 times. It’s addictive as hell, and is one of my favorite films from 2008.

Gutterballs success is really based on two things: Ryan Nicholson’s personality and the film it’s self. Nicholson is nothing but a cut up, and if you ever see someone bash his films on the IMDb message boards, you can expect a witty reply. He takes the good with the bad, doesn’t shill his films like MANY indie directors do, and always thinks of the fans. This is why he has die hard fans. People who rent anything from the New Releases section at Blockbuster will probably have picked this up, and cut it off during the rape scene, thus creating a group of single minded haters. That’s really one of the only flaws with a film like this- a wide release.

People who like 80’s films like I Spit on your Grave, Maniac, and House on the Edge of the Park will love this. It’s trashy, funny, and gory. In fact, I think this film is one of the best throwback films ever. It has the bad taste, vibe, and of course music. The soundtrack is fantastic, and actually lightens some of the harshness of the film (I believe the TLA version has a new soundtrack). True horror fans will love this, because it IS very rough but not unpleasant to watch. There’s not a single redeeming characters, so you will long to see them dispatched.

The actors are pretty good, epically the janitor. His wise cracks are always funny, and he adds enough evil intent to keep you guessing who the killer is. Speaking of the killer, he has one of the best masks I have seen in a long time. The deaths are BRUTAL! We get bludgeonings, stabbings with sharpened bowling pins, strangulation, choking, and the list goes on. One highlight is a bathroom stall sex change that yields hilarious results. Bottom line, know what you’re getting before you get it. If rape revenge films don’t suit you, then don’t bitch about them because you were too lazy to read the back of the DVD case. For me (and fans like myself), this film was a fun, retro slasher that has unlimited re-watch potential.