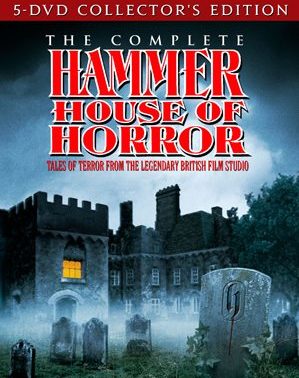 Witching Time – David Winter and his wife Mary aren’t doing too good. Since he is a composer for horror films (Claudio Simonetti he is not), he usually stays at their rural farmhouse working. Mary, on the other hand, is sleeping with his doctor friend (Ian McCulloch) while supposedly “working through the night”. A storm blows through one night when David is home alone, and while looking for his runaway dog (which is completely forgotten about minutes later, BTW), he stumbles upon a cloaked woman in his wife’s horse stables.

The woman, Lucinda, claims to be a witch from the 1600’s- and of course David doesn’t believe her. He locks her in a room and phones his doctor friend, who heads over to investigate the “nutjob”. Total cockblock. Well of course she’s nowhere to be seen, and the doctor thinks he’s losing it. This nudges Mary back into fidelity to make sure her husband is okay. What she doesn’t realize is David has already slept with the Lucinda, who carved her mark on his back mid-coitus…

The mark causes David to begin acting, um, bat shit insane. Then the weird things happen, like decapitated birds left between the bed sheets and blood oozing from the bath faucet. Mary slowly begins to realize David might actually be under the spell of a witch, but Lucinda tries her hardest to keep the wife’s interference down. A voodoo doll (when the fuck did witches begin using these) and burning stake later, Mary realizes she should have listened to her husband from the get-go…

When you have Magenta (Patricia Quinn) from Rocky Horror Picture Show carving shit into some poor guy’s back with her nails during some smashing, you know you’ve done something right. Throw in some William Castle-esque bath time, time travel, and the most fucked up rules to voodoo you’re likely to see, and you have Witching Time, which begins the series of Hammer House of Horror on a pretty entertaining note.

This episode is all over the place. Random companion animals missing and forgotten about instantly, tripping balls suddenly invoking the flame of love, a witch using voodoo dolls (which you can somehow transform someone else into the target of) and one of the funniest cases of denial ever put on film (bloody bath water- David did it, because he’s crazy and can do shit like that).

While not exactly a very coherent episode, it is loaded with nudity, blood, and overall awesome set pieces. Don’t take this as criticism, because it actually adds an absurdity to the mix that accentuates the idea of a “time traveling witch who just got a sex slave” very well. The conclusion is highly entertaining; basically warping almost everything other horror movies have taught you in an effort to kill the witch. This one is just a pure, nonsensical joyride.

The Thirteenth Reunion – Ruth, a reporter for the Woman’s Section of a local tabloid, has been tasked with infiltrating a health clinic with some, shall we say “unorthodox methods”. The Think Thin unit at Chesterton Clinic has a supposed reputation of completely degrading the participants, resulting in a loathing of their body to the point they succeed in weight loss- but are left a shell of a person. The first day there she befriends Ben (Dim the Droog from Clockwork Orange), a man who seems to be gaining weight, not losing it. Despite his packing on the pounds, the coach is more than impressed with his progress.

Feeling some chemistry in the air, Ruth and Ben go out for dinner, where he over eats because “the doctors told him to”. Supposedly gorging himself on food will jumpstart his metabolism, and the little mystery pill the doctors have him will keep it in check. Ruth scribbles her number on his hand, and after a kiss, Ben heads off. Immediately after popping the pill, he begins to feel woozy, hallucinating large trucks coming at him, and is not able to stay on the road. He crashes into a tree, where a mysterious funeral director appears to clean up the mess…

At the funeral, which Ruth attends, an undertaker shares his fears with the reporter. Apparently Ben isn’t the first “plump guy” to have randomly shown up in the funeral parlor, and the peculiar actions of the undertakers around the bodies have begun to make him feel uneasy. As Ruth digs deeper and deeper, she unravels a mystery of missing bodies, suspicious medical procedures, and a room in the clinic full of hanging corpses in body bags. I’m sure this will end well.

What begins as a Giallo-style reporter infiltration plot quickly turns into something much more involved. And confusing. As soon as you think you know where the plot it going, it turns you completely on your head. That’s the good news- the bad news is as soon as you regain your sense of awareness, you can see exactly where Thirteenth Reunion is taking you. Not to spoil too much, but my vibes of a certain French Synapse Films title about the elderly turned out to be, for the most part, spot on. After about 20 minutes if you don’t have this one figured out (except for a few plot details later) then you wear a foil hat.

Now just because you can see the destination doesn’t mean the trip is ruined, and this episode is one hell of a trip. Everything from mummies with secrets, murderous morticians, and a fitness instructor that makes Tony from Heavyweights seem like Mother Teresa. I hope you’re preparing on a heightened suspension of disbelief, because I’m about to tell you the stupidest thing about the whole segment…

Say you murder people. For some this is a thought, but for the more deviant of my readers, this is a tip. You can store the decapitated corpses a number of places. If you want to save them, how about a long stay in the freezer, or a bathtub full of ice? Too much trouble, you say? Well how about taking the ingenious plan of the bad guys from Thirteenth Reunion and storing MULTIPLE BLOODY HEADLESS CORPSES IN A WELL LIT ROOM ON THE GROUND FLOOR WITH A WINDOW FACING THE PUBLIC. I guess the best disguise is in plain sight. Just hope simpletons are the only once within eye shot.

Rude Awakening – Denholm Elliott stars as Norman Shenley, who you might remember from Indiana Jones or To the Devil a Daughter- and he’s having a bad week. A successful real estate surveyor, he dreams of divorcing his old, brutish wife to be with his youthful (and chameleon) secretary. One day, a mysterious man gives Norman instructions to check out a dilapidated mansion out in the rural part of town. Eager to not go home, he agrees.

After finding the obviously not haunted house, that just so happens to have a door that opens its self for you, Norman is mocked by a mysterious voice through the house intercom system for killing his wife on Friday the 13th. Since he hadn’t killed his wife, he protests the accusation… which is when her corpse drops out of the dumbwaiter and the dusty suits of armor attack. As the ghost knights prepare to deliver the death blow, Norman wakes up in bed- the victim of a particularly vicious nightmare.

But it doesn’t end there. Norman’s day becomes increasingly surreal and threatening, resulting in, you guessed it- waking from another nightmare. Stuck is an ouroboros of nightmares and murder, Norman begins having trouble deciphering what is the dream and what is his waking life. Oh, did I mention this happens of Friday the 13th… Yeah…

Anytime you deal with a layer cake of dreams and awakenings, you have to approach it in a way that keeps the audience guessing. The question of what is a dream and what is real has to be there, or the viewer will lose interest quickly. Rude Awakening gets this halfway right. For the first 30 minutes or so, there is a sense of confusion and ambiguity about Norman’s activities. When it is revealed to be a dream, the actions become farfetched and unrealistic, so you are prepared for the jump back into reality.

Now here’s the problem with the second half- everything is obviously a dream. You know from the moment Norman gets out of bed that he’s dreaming, and as soon as he wakes up, it will be right into another nightmare. It becomes so ridiculous by the end you know exactly what to expect. The pacing is right; it’s just the actions that slowly begin to sink the boat. I’m sure the flashback reel before the intro doesn’t help much either.

And just saying this for what it’s worth, if you can’t guess the ending within the first half hour, you are watching the wrong genre. The conclusion is so, so easy to see coming (actually that might be why the second half seems to drag, because you’re just anticipating it to be over). Now that’s not to say this isn’t an enjoyable episode, just not a very thoughtful one. Imagine cutting the last half off about five Scooby Doo episodes and gluing them all together.

You can learn more about Hammer Studios at