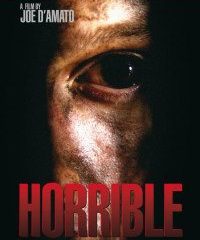 The Film– This pseudo-sequel to Anthropophagous begins with an unnamed priest chasing Mikos, the film’s antagonist. This is pretty much the same character from Anthropophagous (again played by George Eastman), but with a new look and superhuman blood cells. While trying to flee the priest, Mikos skewers himself on a fence- pulling his guts out in the process. He stumbles to the closest house, and passes out. The residents call the ambulance, and his guts are replaced by doctors. The cops find the priest walking down the street, and bring him to the hospital. During surgery, the doctors find out Mikos has blood that coagulates almost instantly, and he was almost healed by the time he reached the hospital. The priest is cornered by the cops, and tells them he is hunting a monster.

After a now revived Mikos breaks out of the hospital, leaving a dead nurse with a drill in her brain, the cops believe the Father. Mikos begins to kill randomly, splitting a butcher’s head with a band saw. While walking down a back-road, he is hit by a blue can, and thrown into a ditch. After recovering (and killing a passerby), he eventually finds the hit-and-runner’s car parked in a driveway. He realizes the house is the one where he ripped his torso apart that morning, and furious, decided to kill the driver and his family. The priest tracks him down again, and a showdown ensues.

Horrible, original title Rosso Sangue- and also called Absurd, Anthropophagous II, Monster Hunter, Grim Reaper II, and Zombie 6 (WTF?)- became infamous when the BBFC banned it back in the video boom of the 80’s. In order to complete my Video Nasties collection, I found a bootleg of this years ago, yet many people have never seen this. I find it funny how Anthro found a huge fan base, but this one took years to even be released. I was thrilled when I heard Mya released this title, and hopefully this will bring attention to this little seen gem.

Personally, I love this film, maybe even a little more than Anthro (even though I consider Anthropophagous a superior film). It doesn’t have the goofy facial makeup, and the story is far better. I mean, it’s pretty hard to believe a sunburnt crazy ate an entire Greek island. The story is vague, and that’s a plus. Do you really need to know why Mikos is superhuman? No, and it doesn’t even matter to the story. The priest doesn’t even have a name, so that might be a clue as to how loose this story is. It adds this sense of mystery to it, and in all honesty I don’t think D’Amato could successfully build up a story behind Mikos (all we know is he escaped from a laboratory).

Now this film has some slow places, just like all D’Amato films. The gore is abundant, but you have to wait from 10-30 minutes for it- but I must say the end is pretty brutal. Once he starts attacking the family, the gore really kicks up. One part where a baby-sitter’s face is crammed into an oven is actually pretty disturbing. We see her fact blister, hair burn, and skin turn purple. It’s a very nice effect, and looks super realistic. The final showdown between the priest, Mikos, and one of the family members is pretty blood soaked too. I don’t like the setting as much as I did in Anthor, but I like the effects much better. If you liked Anthropophagous, then chances are you’ll like this one too.

The Package– Like I said, I had a bootleg of this for years. It was from a VHS rip, and was almost unwatchable. Mya had to use two sources to give us an uncut version- a true print and what looks like a VHS source. The print has been cleaned up nicely, but the VHS is about like my bootleg. It’s only used for about 30 second clips, but the change is beyond noticeable. It feels kind of like Frankenstein’s monster, but it’s watchable. There’s one annoying flaw with this transfer, a white line on the right. It’s only a fraction of a millimeter, and in all honesty you’ll stop noticing it subconsciously, but every time the source changes to VHS it vanishes. When it goes back to print, your eye will catch it for sure. It’s not terribly distracting, but I just wanted it gone. It was so small it could have been cropped off, or if they wanted to keep the correct ratio, altered to black, a far less-detracting color.

There’s the Italian audio option with no subs, and an English dub. The English track is as goofy as can be expected, and Mya did a nice job transferring it. There’s no damage, and the volume stays level during the film. Some mild hiss, but I don’t recall any crackling or popping. I would have like some subs to go along with the Italian dub, but what we get works fine.

No extras, which is very annoying. I would have liked to have two cuts of this- uncut and just a "print" version. The VHS scenes are just dialog or plot related without additional gore or violence. I really would have liked a cut of this film without the VHS footage. At a $25 retail, I think this release really needed some extras (if not my idea of two cuts) to be worth that much money.