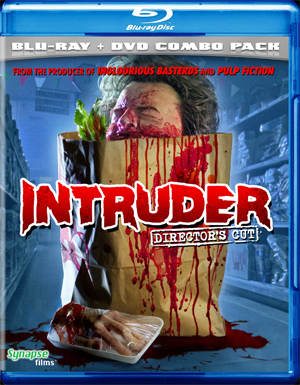 The Film – The staff at Walnut Lake Market has a little bit of a problem. The pretty cashier, Jennifer, was dating this guy Craig about a year ago, up until he was sent to prison. For murder. The relationship only lasted two months, but Craig has been hoping Jennifer will take him back. After being paroled, he decides to waltz into the store and get his girl back. Things really don’t work out as planned.

After causing an argument and backhanding Jennifer, the co-owner Bill decides to kick his ass out. Well prison has taught Craig how to fight like a barbarian, and he ends up taking half the store down before fleeing into the back storage area. A manhunt ensues, but the sly convict manages to slip past them at every turn. As Jennifer calls the cops, Craig re-emerges, only to have his ass drug out of the store by the other owner, Danny. Craig sulks out into the darkness.

Bill and Danny congratulate the crew on how they handled the whole “there was just a murderer who dropkicked half of us but we still managed to throw his ass out” thing, only to deliver even worse news- they plan to close the store down within a month. The owners retreat to their office to finalize the paperwork, and the night crew begins marking all the groceries down to half price.

Not long after the Craig incident, Danny lets the staff take their break. Everyone’s in a bad mood, you know with the maniac that decided to punch half of them and the losing their jobs and all, so Bill decides to tell a story to lighten the mood. Back when he was a volunteer fireman, a co-worker named Parker found a severed head at a car crash, and brought it back to the scene while still eating a burger (ala Raising Arizona). Hilarity ensues.

Linda, a cashier that’s not part of the night shift, gets ready to go home to her boyfriend. As she puts a bag of groceries in the trunk, a silhouette with a butchers knife approaches. Bill hears the commotion and rushes outside with a hammer, only to find Craig breaking into a window. A fight ensues, with Craig managing to wrestle the hammer away from Bill and clunk him in the head with it.

A mysterious intruder breaks in through the window Craig was at, and the first person to get knocked off is Danny, who has his face smashed against a paper spike. The next to go is the nerdy produce guy, who learns the hard way that the knives in the store are really, really fucking sharp. As the night goes on, more and more workers go missing, only to be found mutilated in dementedly hilarious ways. Is it Craig (of fucking course it isn’t), or is someone else the murderous intruder?

I think slasher films are among the best horror movies out there, I just fucking hate reviewing them. I can only mention about one or two kills, can’t show the really cool screenshots, ect. Since there’s a set cast of characters, and the only real merit of a slasher film is how and when these said characters die, as a reviewer you’re in a bit of a pickle to convince your readers to view the movie without spoiling it. Now with that said, Intruder is in the top five best slashers ever made. There, didn’t spoil a damn thing, did I?

There are two kinds of retro slashers- the first wave, which came in the late 70’s to mid 80’s and had a more serious tone. The second wave came from the mid 80’s to the early 90’s (essentially a precursor the Scream “phenomenon”), and mixed in humor and an almost tongue-in-cheek attitude. Compare, let’s say, The Burning, Friday the 13th, The Prowler, and My Bloody Valentine to Girls Nite Out, Madman, (the God awful) Cutting Class, and the Sleepaway Camp series. Intruder falls into the second category, and is pretty much the pinnacle of the second wave slashers.

Directed by Scott Spiegel, producer of Evil Dead II and Thou Shalt Not Kill… Except, Intruder is a great mix of humor and the gore- with a cast that brings it all together. There is some great talent here, like the Raimi Brothers and Dan Hicks from Evil Dead, and Renee Estevez (Charlie’s little sister) from Sleepaway Camp II.

There’s even a cameo from Bruce Campbell, but it’s only a few seconds at best (while we’re on cameos, director Scott Spiegel also pops up as a delivery boy who gets a knife to the spine). Sam Raimi in particular stands out, playing the ill-fated butcher. He always has this discontent look, but delivers snarky lines that catch you with unexpected humor (especially the one to his brother Ted, who plays the produce boy).

Dan Hicks is also great, playing the owner who doesn’t want to see the store close. His delivery of the “head in one hand, sandwich in the other” speech is great, and in the latter half of the film he’ll make you laugh your ass off. Speaking of laughing your ass off, there’s a ton of dark humor in Intruder.

Things like a corpse being sawn in two with an “as advertized ½ off” sign stuck on it. It’s not exactly the “splatstick” used in Evil Dead II, it’s more along the lines of a situational pun. But the one thing that completely caught me off guard is a random German magazine about ejaculation just sitting on the stand…

Now what everyone knows Intruder for are the legendary effects by KNB (which were completely removed from almost every home video release, especially the VHS). I’m not talking about your typical slasher killings here, I’m talking about heads getting smashed by garbage compactors and sliced in two by meat saws. There’s one scene in particular that I fucking loved, when a guy gets stabbed in the beer cooler and blood and beer spew in opposite directions. Really inventive, bloody kills that make Intruder stand out in the slew of 80’s slashers.

What’s even better is how the killer displays the corpses afterwards. You know how in movies like Friday the 13th and the already mentioned Sleepaway Camp, the killer will pose the bodies, taunt the victims with them, ect? Yeah well this sick bastard dismembers almost every corpse and plays with the limbs and viscera. So you get the bloody slasher killings, then later you get to see the mangled corpse used as a set-piece (usually in some dementedly funny way). I know it sounds bad to get so excited over this “double gore”, but it’s just so goddamn satisfying.

Now for all the great things about Intruder, it does have two flaws. First off, it’s more than blatantly obvious Craig will not be the killer. I mean this guy is easily one of the most in-your-face distraction I’ve seen in quite a while. That leads into the even bigger issue of how easy it is to guess who the killer is. That’s all I can say, because it’s literally impossible to give any info without someone being able to piece together who the real intruder is instantly. Hell, even reading the review is enough to give the real killer’s identity away. It’s so obvious that the original VHS release just had the real maniac on the cover.

Aside from the ridiculously easy-to-guess killer, Intruder doesn’t have many “bad” things going for it. I mean there’s some things here and there like hilariously bad fight choreography and extremely hammy dialog by the killer, but that works in the films favor. Overall it brings nothing new to the slasher game, it just maxes out the gore, adds humor, and changes the setting to something fresh (hey, you’d be amazed how effective a grocery store is for a horror flick). If you’re a fan of the second round of slashers that were as goofy as they were gory, then Intruder is your holy grail.

The Package– Synapse Films have presented Intruder with an almost perfect transfer void of any major damage whatsoever. Colors pop, black levels are spot on, and the lack of DNR leaves a nice coat of noise to give it that distinct look. To say it looks better than the Wizard release from a few years ago would be an understatement, so if you like Intruder, this Blu-Ray is going to blow you away.

The only audio track available is the original mono in DTS-HD. While I would typically bitch about there not being a 5.1 track, this audio mix is so clear, so balanced, so spot on that I honestly don’t even mind. This is a fantastic track without a single thing to gripe about.

There’s a making of featurette, extended gore sequences of the kills (sourced from the original workprint), a semi re-creation of Spiegel’s original short film Night Crew (made with the outtakes of the actual film, which was lost decades ago), a short snippet of Vincent Pereira (part of Kevin Smith’s View Askew team and director of the criminally underrated A Better Place) talking about his love for Intruder, original audition footage, stills gallery, and the original trailers (as both Intruder and Night Crew). Everything is worth checking out, but the extended scenes and re-worked Night Crew are essential viewing. Synapse Films has put together a disk that could easily contend for release of the year.