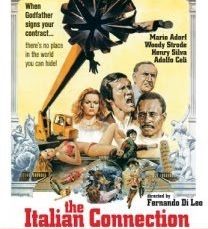 The Film– When a hefty shipment of heroine is stolen on it’s way from New York to Italy, a "businessman", Mr. Corso, hires two American hitmen to kill the thief. After talking with the mafia Don in Milan, Don Vito Tressoldi, Corso believes the man who swiped his dope was Luca Canali.

Luca, in reality, is just a small time pimp with no connection to either faction. The hitmen, Frank and Dave, masquerade as tourists looking for their old friend from the war. After hitting up some parties (that look like a Warhol wet dream), they get their first lead on Canali’s whereabouts.

Frank and Dave aren’t the only men looking for Luca. Don Vito Tressoldi has also instructed his solders to capture him alive. One of his girls phones him to let him know some Americans are looking for him, and soon after some of the Don’s men pick him up and take him to a lumber yard.

After being beaten and harassed for reasons unknown to Luca, he fights back and flees the lumber yard. The Don and the hitmen arrive, and after some harsh words from the Americans, Don Vito decides to step up his game. Luca calls him from a payphone, and he calmly asks him how his wife and daughter are doing…

After a frantic attempt to get his family out of town, Don Vito’s men kill them anyway. Luca has finally been pushed too far, and he begins a war against the mob to figure out why they want him so badly.

It turns out maybe the Don knows a little more than he let on about that missing heroine shipment, and with the Americans on his ass, Luca tires to piece together the mystery, take revenge, and get out alive.

Directed by Fernando Di Leo, The Italian Connection (aka Manhunt) is the second of his Milieu Trilogy. This particular film is supposedly what inspired Tarantino to make Pulp Fiction with a black and white hitman with totally opposite personalities- and that sounds about right.

Despite the generic Euro-Crime formula of "someone’s gotta pay for something they done did", The Italian connection manages to be entertaining because it adds some originality to the plot. The target is innocent, the characters are actually well developed, and the settings range from a psychedelic party to a rusted junkyard; however, it doesn’t have quite enough to make it stand out.

The strongest aspect of the film is how the characters transition from what they appear into what they really are. Frank is a withdrawn, all business type of guy, and Dave is a typical 70’s playboy- but eventually they drop these facades and you see just how evil they truly are.

Alas, despite the originality of the plot and settings, the execution is nothing that stands out above other Poliziotteschi films. The one scene that will stick with you is the ending, and it sucks that I can’t talk about it without getting into spoilers, because it’s fucking awesome!

The Italian Connection is not a bad movie, it just doesn’t tweak the Italo Crime formula enough to really stand out. It’s good, don’t get me wrong, but a decently by the numbers film that probably won’t be lodged in your brain for too long.

The Package– Raro has given us a pretty good transfer. There’s not much major print damage, and the grain is kept in check- but some scenes are way too soft. Seriously, I thought my contacts were going bad or something, because some characters in the background didn’t even have visible facial features.

The English track is really good, containing minimal distortions and keeping a decent balance in volume. It can get a little quiet in some places, but nothing major. There is also an Italian track with optional English subs.

There’s a featurette on the making of the film (oddly listed on the menu as a documentary about the mob), a photo gallery, and a biography and filmography for director Fernando Di Leo. A little bland, but the featurette is pretty fun. This title is available in a boxset with three other Di Leo films, and the set comes with a very impressive booklet.

This review is based on the Fernando Di Leo Boxset, not the upcoming stand alone release.