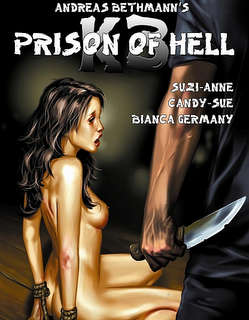 Wow, just wow. This is easily one of the nastiest films I have seen. Bethmann stars as the doctor, and he’s a slim bag extraordinaire. The warden and Sub Warden are pretty vile, but Bethmann steals the show as Dr. Bertucci (an alias he used to direct hardcore films for years). Only Jenifer and the prison staff are returning actors, and the fresh faces are nice to see, because most of his stars are very, very grungy looking. With the first hour or so being almost entirely hardcore (with some "Asian inspired" torture thrown in to boot), that might put most people off. Fear not, because the last half hour is nonstop violence. The effects are done by SFX maestro Olaf Ittenbach, and the prolonged torture scene at the end (dished out by "Pete-Scissor-Hands") is one of the most realistic things I have ever seen! You can actually see the tension build on the flesh before the blade goes in, and the actress shamelessly pisses herself in graphic detail. This is 100% pure exploitation gold, and if you don’t like hardcore too much, but love gore, see this! The last half hour is worth the price alone, and this is easily my favorite Bethmann film.

The Package– Bethmann has shot this masterpiece on film, as opposed to his usual DV. There are some noticeable moments of grit, grain, and scratches. This does nothing but enhance the film, because the colors and firmness of the picture are fantastic! Only problem is there is some mild pixelation in scenes of rapid movement. This is a damper on an otherwise great transfer.

The audio is useless unless you speak German. As long as you have it at a decent volume, you can hear the moans and screams perfectly. The English subs are pretty funny, because they don’t literally translate into English very well (a glorious example is "I’m going to jerk off in your ass, bitch!"). This adds to the fun factor, but I would have loved to have had a dub of this Oscar worthy dialog.

This 2 disk set comes with: the export version and the "film" version (which is cut by a minute and has a fake aged look to it, but lacks subs), a making of, extra scenes, and the trailer.

We thank holdempokersupplies.com for supporting Sins of Cinema.

Submit Your Review Below!