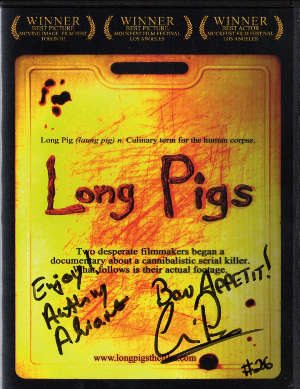 The Film– Nathan and Chris are two young film makers who want to break through the mediocrity and come out full force. They decide to make a documentary on Anthony McAlistar, a local serial killer who’s only reason for killing is to eat the flesh of his victims.

After showing how Anthony selects his victims (which are mostly prostitutes), the film makers witness how you prepare a corpse for consumption. As revolted as they are intrigued, Anthony maintains a sane, jolly demeanor while he butchers his victim in an almost natural way. With the meat, he makes a stew.

After a few days of being together, one of the film makers tries the meat. With the freezer getting empty, Anthony sets his eyes on a pompous third gen millionaire who degraded his friend at work. While all of this is going on, the film interjects footage of a police detective and pathologist talking about the typical serial killer. Anthony is nothing like the monsters they describe.

As his mother begins to deteriorate rapidly (believed to be dementia), Anthony starts to show less enthusiasm to being filmed. He isn’t as upbeat, and the film makers seem to annoy him more than anything. When asked about his origins, Anthony mentions one victim in particular. The three set out to see what impact the disappearance did to her family. While this encounter upsets him, his mother dies, finally pushing Anthony to a breaking point.

Cannibals in films can be anything from Leatherface to an Amazonian tribe, and since it’s a big range,it usually yields gory results rather than powerful results. Long Pigs (which is slang for human flesh) pretty much demolishes this archetype and re-defines the word cannibal.

I went into this movie expecting some August Underground style film with a high body count and insane gore. There’s gore, yes, but the body count is based on need, not lust. Anthony feels no pleasure from murder, so there’s not a single reason he needs to kill more people than he eats. His vice is food, and when it’s all gone, he wants more.

Speaking of Anthony, he’s a bubbly, friendly man who seems socially retracted but not reclusive. In simple terms, Anthony is a typical human. You can’t help but like him, and his awkward sense of humor does nothing but draw you to him. Even while watching him butcher people, he seems like someone you’d like to have a beer with. It’s when he’s talking that you begin to see how evil he truly is. That is brilliant. When someone can make you enjoy a character while he’s killing, then despise him because of one sentence, that’s fucking brilliant.

But Anthony is not the only monster. Chris and Nathan are just as sinister, capitalizing on murder and even sinking as low as to interview the father of one of the victims (claiming to be working for a missing persons T.V. show). When everything is said and done, they really are the true demons in the movie, because Anthony only kills to eat, while these two want to use murder to propel their careers. Another genius thing about this film, you hate two film makers more than you do a serial killer.

This movie makes human meat look tantalizing. By having an Average Joe prepare a stew instead of a chainsaw madman, or some primitive native, you create a connection. You actually want to taste the meat, and their reactions make you want it that much more. It’s a natural acknowledgment of good food, not some bullshit Rachel Ray "foodgasm". Everything in this movie feels natural, epically the disturbing content.

In case you can’t tell already, the film is amazing. Everything works and has justification, and the characters and themes are so normal that you don’t even realize it’s a movie. Seriously, during a BBQ scene I was counting the ribs poking out of the meat just to ease my own suspicions. The largest issue I had with the film was that it felt too real, so what does that tell you.

It draws you in, then changes personalities while holding on to you. I haven’t seen a movie this gripping, yet painful, in years. My only real issue is the ending is a a tad generic, but with a movie this strong, that doesn’t even factor in. If you like horror in it’s simplest form, then you deserve to see this film.

The Package– The picture looks about as fuzzy as a "hand-held camera" film should. It’s not been digitally edited to look gainer or clearer, so the results are very raw and sharp. The quality fits the movie perfectly.

The audio dips in and out just like a normal camera would. For the quiet scenes, there are burned in subtitles. My only complaint is that some spots aren’t subtitled when they need to be- but it’s not a distraction, and it only happens about two times.

There’s a director’s commentary, as well as one by Anthony. Also, there’s quite a bit of behind the scenes stuff, including rehearsals and SFX work, and some fake radio interviews. Periodically the film is released with a bag of Anthony’s Own Beef Jerky, which usually comes signed (as well as the DVD in these cases), and some postcards. The on disk extras are phenomenal, but the signed bag of jerky, if you can find it, makes this one of the coolest DVD releases of the decade.

This edition is sold directly from the film makers on eBay. More pictures below.