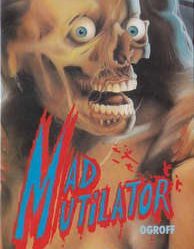 The Film– Ogroff is the leather masked killer hiding in the backwoods of France. He has a knack for chopping people (as well as cars and chess boards) up with his variety of axes. After dispatching of a family- and making the mom watch her son being dismembered and fed to… something living in his basement… Ogroff begins the hunt again. This time he finds some teens playing chess, and kills everything, including the teens, the chairs, the table, the chess board, the fire, and the car. Nothing is too big for Ogroff to chop up with is axe, and even a chainsaw isn’t as pleasing as his vast collection.

After a while, Ogroff finds something he (or any viewer, for that matter) never expected to- a wife! She’s all he ever wanted, and she’s very impressed by the size of his axe. Everything is peachy for Ogroff, he’s out killing people by day, and his wife is with him at nights. What could possibly go wrong? Zombies, of course!

Ogroff (Aka Blood Zone, The Axe Monster, and Mad Mutilator) was one of the strangest films I have ever had the pleasure of watching. It was shot for pennies, and the budget REALLY shows. There are only 8 lines of dialog in the film, because director N. G. Mount couldn’t afford an audio track. You know that means the music must be great since it’s 99% of the movie, right? Yep, Ogroff has a homemade soundtrack, that is constantly interrupted by sound effects. The audio is so hackjob, because every type of sound has to be inserted separately. Basically anytime there’s a noise or dialog, the music and sound effects just stop, because Mount couldn’t afford to have more than one sound at a time. The results are absolutely amazing, and confuse the Hell out of you. It’s the cheapest damn audio track I have ever heard, and without a doubt the most unique. I’m just waiting for Lars Von Trier to see this movie and create his next gimmick, because an audio track can’t get any more minimal than this one.

The first half of the film is just kill after kill. There’s about 10 kills in the first 30 minutes, and that’s before the ball starts rolling. The reason Ogroff kills is to feed his pet zombies (and to nibble on some flesh himself in the process), which he keeps locked in his basement. Once his wife accidentally lets them out, random zombies appear all over the place. This film is the Murphy’s Law of cinema, because if you can think of it, it happens in Ogroff. Despite the fact there are hundreds of zombies buried in the ground, they only awaken when his pets escape. Makes perfect sense.

If you thought Murphy’s Law was limited to zombies, you were dead wrong. Ogroff dispatches of these living dead by hopping on his motorcycle and jousting with axes. His wife flees in her car, which runs out of gas. The film ending must be seen to be believed. Seriously, Gummo and Inland Empire don’t even compare to how this one ends. If you don’t want that spoiled, then don’t read the next few sentences! Ogroff crashes and is overwhelmed by zombies, becoming one. His wife is rescued by a Catholic priest in a hot rod, who turns into a vampire and kills her. End.

Seeing as how Ogroff was only released on SECAM VHS (one of the hardest formats to convert for viewing on American T.V.s) in France, I doubt you’ll ever find a copy for sell in the US. It was never altered, but there are three different titles out there (Blood Zone, Mad Mutilator, and The Axe Monster). My personal copy is the American Video release under the Mad Mutilator title, and cost me three figures- and it’s not even the rarest version (Blood Zone is). You have to look hard for boots, because there’s not many good ones out there. I recommend you download this if you can, because your chances of seeing it on anything other than a computer screen are slim to none. Prepare to have a huge chunk of change if you want this tape under any of it’s titles, because most Americans (and quite a few French too) will never get it.

If you can find Ogroff, I strongly urge you to pick it up. I am willing to bet money this will never be released on DVD, because it’s just too obscure and rare- even for most genre fans. I personally love the film, because there’s nothing else like it. If you have been looking for a while for something new, then find this one fast! The director owned a VHS rental shop, so Ogroff is his love story to every sub-genre of horror. It’s nothing for the casual viewer, but if you like cheap, crazy, stupid and one of a kind- you can’t go wrong with this movie.