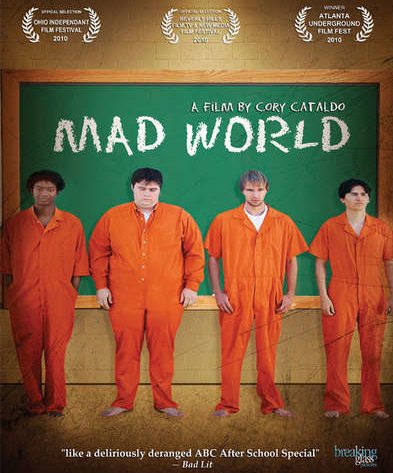 FILM- After his mother leaves the picture, Will and his abusive father relocate to a small southern town. Waking him up the next morning with a spray bottle, his father spews that the boxes need to be unpacked by the time he gets back home.

Will steps outside to enjoy a cigarette when his neighbors, Cory and John, step outside for a joint. The three hit it off and talk about how crazy life is, epically for John. He was adopted by a white family, so everyone at school either calls him “White Nigger” or “Uncle Tom”. On top of that, his stepbrother recently died.

The three head to school a few days later, picking up the fourth member of the group, Jevon. He’s an incredibly smart kid with amazing grades, but his home life is so fucked up that he’s constantly tripping on LSD.
Within three minutes of walking in the door of his new school, Will is insulted by gang of football all-star rednecks. The leader of this cesspool of high school society is Tim, a proto-hick with a rebel flag bumper sticker and a “whoah back!” attitude.

Tim and his posse call John a nigger, and Cory defends his friend- resulting in him being beaten and receiving detention. Will is the target of abuse from his larger-than-life teacher (who just won Teacher of the Year), and Jevon is harassed by his councilor to ditch his looser friends or she will be talking to his parents.

When their video gets played on the school news channel, the teacher beats Will, resulting in him losing his job. Finally, life begins to look up for the boys, and their names have some substance. But when a prank to get back at Tim and his good ‘ol boys leads to Jevon’s expulsion (and loss of a scholarship), suddenly they’re thrust back into the depths of Hell.

Eventually the same cycle of harassment resumes, only ten times worse now. Jevon’s sadistic father pushes him past his breaking point, Will and John are beaten and violated by Tim, and Cory flees the goddamned town. But something draws him back, and his return sets in motion a storm of violence that no one could have expected.

From the cover alone I was not looking forward to watching Mad World. Its Usual Suspect-ish artwork and indie comedy vibe didn’t appeal to me, and I chose to take a look at Cropsey first. When I finally popped the disk in, what looked like (and started out as) a comedy ended as quite possibly one of the most damaging and ruthless films I have ever experienced.

Mad World does begin as a comedy- a very funny comedy. It’s a clever mix of stoner humor, potty mouthed insults, and total randomness. Coming off Devolved, which is possibly one of the best comedies released this year, I can say Mad World managed to make me laugh my ass off. And that’s saying something.

But sadly, this is not a comedy. What begins with a laugh ends in depression, and this film is relentless in breaking you down. After some National Lampoon style revenge on their tormentors, life turns into a nightmare for these boys. The abuse is realistic and heartless-both at home and in school. The administrators are out to expel them, their parents are psychotic, and the students kick the shit out of them on a daily basis.

What begins at typical bullying escalates into hate crimes and assault, and every attempt to correct this backfires and gets the friends into more trouble. They raise some truthful points about the racist fuck being able to get into Harvard just because he can catch a football better than most- but they try to fight back and get slapped with assault charges. Possibly the most depressing aspect of the whole film is the cost of their stand against this hatred and racism.

Charles Manson once said “I am a product of society”, and that one phrase pretty much sums up Mad World. People are fucked up, and the only thing this leads to are actions just as fucked up. But what makes this such a dark and powerful film is its realism.

The suffering of these students, and their eventual explosion of violence, is nothing like, say, Duck: The Carbine High Massacre. It’s a sympathetic look at four kids whose lives were ruined, and in return they ruined as many lives as they could.

I can’t give much of the bullying and abuse away, but several times I had to pause the film and take a smoke break. After about two thirds of the film tilting on a bittersweet pivot between comedy and humiliation, the final act is just plain damn soul crushing.

Mad World also uses a very humorous motif of the four in prison jumpsuits. During the film, their attitude changes during these scenes. When something bad happens, they stand there while people throw mud at them. When something good happens, they laugh as they try to block the dirtballs. The last scene cuts back to one of these “jumpsuit” moments, and it’s interpretation could alter your perception on the entire film. When I say this movie is though provoking, I don’t think I can stress it enough.

I haven’t seen many movies that have the intent of hurting the audience, but Mad World does. By the end of the story, everyone has lost all humanity, all redemption- but still you feel sympathy for them. It’s Elephant crossed with The Deer Hunter (and a few traces of A Better Place).

I also feel obliged to mention that in over two years of reviewing graphic, disgusting horror films, I have never once had to take a break between watching the film and the review. Sure I sometimes got distracted, and none of my reviews are posted right after the film ends, but I’ve never had to wait for a film to sink in before reviewing it. I watched Mad World about a week ago, and just now wrote this review. This is the first time I’ve ever had to let a film absorb into my mind before writing about it.

The production values show- mainly in the editing, but the product is still fantastic. I would love to see what these guys could do with a big check, because there’s some serious talent here. A damaging film that lulls you into safety with laughter and tenderness-then kicks you in the face with steel toed boots, Mad World is one of the cruelest films I’ve ever seen. 9/10