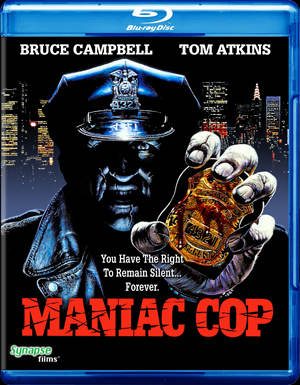 The Film– On a seedy street in New York, two thugs see a woman leaving her bar and decide to have some fun. After unsuccessfully trying to mug the girl, she flees into a park where she sees a hulking officer ahead. Instead of protecting the woman, the officer snaps her neck like a twig, throwing her corpse to the ground and leaving the blame on the two street rats.

Witnesses who saw the thugs chasing the girl alert police, and the two are arrested the following morning. Detective Frank McCrae (Tom Atkins) inspects the body in the morgue, and notices the humongous handprints on the woman’s neck. McCrae doubts the punks could have killed the girl in such a way, suspecting the police officer they mentioned might have been the real killer. His idea is quickly rebuffed by the precinct.

That night, an officer busts a couple making out in a parked car. The boyfriend steps out, but the cop slits his throat with a blade concealed in his billy stick (standard police issue, I’m sure) and throws his corpse through the windshield. His girlfriend manages to escape, telling the police that one of their own was the killer. This strengthens McCrae’s theory of the killer policeman.

And the following night the killer strikes again, drowning a man in wet sidewalk concrete. McCrae is certain a cop is the murderer, and leaks some of the case info to a local newswoman. The news dubs him the “Maniac Cop”, finally bringing the killer to public attention. This also results in people attacking and even killing innocent officers, believing they were the Maniac Cop trying to hurt them.

For Officer Jack Forrest (Bruce Campbell) and his wife Ellen, things haven’t been going well. His late night patrols are making her suspicious he’s the killer, and the mysterious phone calls asking “how many people will your husband kill tonight?” aren’t helping either. After Jack leaves for the night, Ellen decides to follow him.

Ellen follows Jack to a seedy motel, and the receptionist gives her a key to his room (keep an eye out for the cameo by director Bill Lustig). It turns out Jack isn’t tearing apart innocents during his night patrols, but instead tearing up the sheets with his co-worker, Officer Theresa Mallory. Ellen leaves the motel in a fit of rage, only to be abducted by the Maniac Cop. Housekeeping finds her body dumped in the hotel room Jack and Theresa rented the next morning.

Jack is pulled out of the briefing room by Captain Ripley, who informs him of Ellen’s death. Well since the room was in his name, Jack is arrested and booked for her death and the Maniac Cop killings. Since his only witness could possibly lose her job if their affair gets out, Jack decides to keep quiet and see if the killer strikes again while he’s behind bars- confessing his relationship with Officer Mallory only to Detective McCrae.

The detective considers her a high risk target of the Maniac Cop, and secretly goes to pull her off the streets. Posing as a prostitute undercover, Mallory takes a break only to see the hulking Maniac Cop walking towards her, lifting her off the ground by the throat. McCrae arrives just in time to save her, but somehow the cop vanishes despite both officers shooting him multiple times- even in the head.

Mallory tells McCrae she only told the mousy file lady about the affair, making him suspicious that she is the officer leaking informing the killer. Fearing her safety, McCrae lets the shaken officer stay in his apartment until he figures out who the file manager is leaking information to. After following her to an abandoned pier later that night, he realizes the Maniac Cop is her former boyfriend, Matt Cordell.

Officer Cordell was a hulking super-cop who kept the streets clean with excessive violence and brutality. His “taking the law into his own hands” approach forced city officials, fearful of their jobs, to throw Cordell into Sing Sing prison. One day he was attacked by a gang of shank-carrying inmates (namely those he personally put away), slashing him to death in the showers. But somehow he’s back on the streets, killing anyone who crosses paths with him.

One night McCrae decides to bring Mallory to talk with Jack in his cell, and all hell breaks loose. Cordell ambushes the precinct, massacring countless officers and leaving Jack to blame for a second time. Working with the surviving officer of the attack (well kinda, but saying anything else is going into spoiler territory), Jack realizes Cordell is planning to attack the city officials that sold him out during the annual parade the following day.

Police and SWAT are buzzing at the parade (also keep an eye out for a cameo by Sam Raimi around this time), but that doesn’t stop Cordell from his murderous agenda. Trying to protect what’s left of his precinct, Jack and his partner accidentally draw the Maniac Cop towards them for a final showdown. Hunted by the force and Cordell, Jack must take down the Maniac Cop to clear his own name and put the killer officer down.

Maniac Cop was the second horror film directed by Bill Lustig, who’s most famous work is the 1980 masterpiece Maniac. Teaming up this time with B-movie legend Larry Cohen (God Told Me Too, It’s Alive, The Stuff) as scriptwriter, the two created what eventually became an unsung staple of horror cinema.

The two would work together on the Maniac Cop sequels and Uncle Sam (I Want You Dead). Lustig formed one of the most successful genre DVD releasing studios, Blue Underground (after a venture as featurette director for Anchor Bay), and Cohen went on to direct, pen, and produce horror and exploitation films. His recent efforts are the Masters of Horror episode Pick Me Up, and Captivity. To date Cohen is only one of two directors to have a boxset of his films released by Blue Underground.

As for the film, it’s an interesting one to say the least. Admittedly, the outline is basically Friday the 13th set in New York with Jason in a cop uniform, but the execution is incredibly unique. While it has an almost generic story and cast (skeptical detective, good cop vs. bad cop, invincible slasher killer, ect), it’s the characters and tweaks that make Maniac Cop so damn good.

Starting with the characters, the Lustig/Cohen team really knew what they were doing. Bruce Campbell as Officer Forrest is just ingenious. Ever since Evil Dead II Campbell has been seen as a comedic horror actor, and movies like My Name is Bruce and Bubba Ho Tep have proven this.

Now don’t get me wrong, I think Bruce is goddamn hilarious, but he hasn’t had many serious or non-likeable roles. Maniac Cop was released in 1988, one year after Evil Dead II, and instead of casting an incarnation of “Ash”, Campbell plays a really sleazy guy.

I mean the first time we see him he’s snarling at his wife, who he’s cheating on… and eventually is murdered. No remorse other than the fact he’s blamed, and the film chooses him and his girlfriend as the main protagonists. That’s a big risk to take for someone who is known for yelling “this is my boomstick”, but it paid off in such a satisfying way. No one-liners, no Stooge-esque gags, just Bruce Campbell playing a really unlikeable guy, and it’s great.

Tom Atkins as McCrae is also fantastic- granted it is a typical Atkins role. I mean, he does play a badass cop about 99% of the time, but he’s fantastic at it. With Bruce Campbell, the drastic change in character was fresh and completely unexpected. With Tom Atkins, you want a smug, smart ass detective, because he plays such a fucking brilliant smug, smart ass detective. I mean, his first role was playing an officer in the 1968 film The Detective, so what more do you want?

Even in movies where he doesn’t play a cop, like Halloween III, he essentially is one. There are just some things that don’t need to be shaken up (for example, would you want Charles Bronson in a Nicholas Sparks movie?), and Tom Atkins essentially playing Tom Atkins is something that doesn’t need to be tinkered with. To avoid spoilers I really can’t mention my only complaint with Atkins in Maniac Cop, but let’s just say gravity is a bitch.

As for the Maniac Cop himself, again this is a unique mix of slasher staple and ambiguity. In the sequels Cordell is a zombie, but this first venture leaves it open to interpretation. The medical examiner in Sing Sing says he only had brain damage after the attack, but officer Mallory shoots him in the face twice without any effect. I know not every inch of the brain is essential, but I highly doubt removing a chunk of it with a bullet wouldn’t have negative effects. It leaves enough unexplained to make the audience decide what Cordell is. A zombie, demon, or just a brainless shell full of rage?

The kills are especially well done, and the scene where Cordell is slashed across the face will be one of the highlights. Again a great mix of typical slasher fare, but modified for the environment. Instead of drowning someone in a swamp, the Maniac Cop drowns a business man in wet cement- making for an oddly disturbing scene where his face is jack hammered out of the ground. The only aspect of the film that struck me as over ridiculous is the knife billy club thing. I’m not an expert on police equipment, but I’m pretty damn sure that bladed instrument of murder isn’t standard issue… Regardless, it makes for some interesting and gruesome scenes.

Maniac Cop is the film equivalent of making a bologna and cheese sandwich with five star ingredients- it’s all familiar and you know what to expect, but it tastes much better. The slight tweaks on the basic slasher formula, mixed with the unique characters, kills, and story add enough pizzazz to entertain the hell out of any viewer. It does have a knack of staying in the slasher film comfort zone, but that’s such an entertaining and enjoyable place that even when it’s not doing something original you’re still having fun.

The Package– Synapse has done a fantastic job of preserving the grittiness of the film while still providing a beautiful HD transfer. You don’t want to watch a movie set in the gritty New York of the 70’s and 80’s without some roughness to the picture, and the lack of DNR allows for a great mix of eye popping clarity and atmospheric grain. Details and colors are sharp, black levels are kept in check, and everything just fits together nicely.

Synapse has included three tracks, a 6.1 and 4.0 surround, and a 2.0 stereo; all of which are DTS-HD Master Audio. I watched with the 2.0 track, which had fantastic balance and was crystal clear. There’s not much I can find at fault here.

The Blu-Ray is presented with the basic tabbed layout, same as their previous disks. The chapter selection flows horizontally, and the extras and options are pop-out lists. The font is a little too small on the extras menu, but no serious cosmetic annoyances. Everything functions perfectly, and the pop-up menu works great during playback.

Returning from the 2006 DVD is Maniac Cop Memories with Robert Z’Dar, and the extended scenes featuring the mayor that were only shown during a Japanese TV broadcast. New features include interviews with Tom Atkins (who shows no reserve in his mixed feelings about the film) and Danny Hicks (who played the SWAT commander during the parade), a promo art gallery, plus trailers and TV spots. Overall great quantity, but the short length of the interviews-not to mention lack of the commentary track from the DVD, does bring the score down slightly.