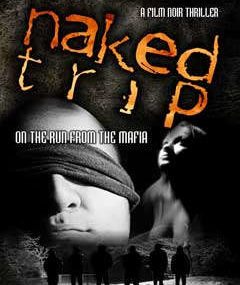 While out one morning, a motor cycle riding mafia thug warns Eastman he has 24 hours to pay back his damages. When his distributor won’t help him out, George beats him with the film canister and decides it’s time to flee the city. He picks up his old actress friend (telling her he’s casting her in his newest movie), and heads for the coast. Only the mob won’t let their IOU get away so quickly, and soon George has a couple of stalkers on his little trip to escape it all.

Naked Trip is a film that I was sent with no idea what it was about, which had its pros and cons. For starters, I was expecting something a little more violent and gritty. The film is dedicated to Jesus Franco and Jean-Luc Godard, and takes from the latter. It does have some fist scuffles, but no weapon based fights- and that’s why I love it.

Now, with a film about a man running from the mob, one would expect some over the top violent conclusion. What Naked Trip does is take a more human approach. This isn’t some action hero. he’s just an average guy. He’s like any man out there, he doesn’t want to blow all of his troubles away with an uzi, he just wants to escape them.

This film is really like Lynch’s Wild at Heart. Out two protagonists flee some very bad people, and meet some bizarre folk along the way. There characters are not stupidly odd, but enough to get the "something is not right with me" point across. Again, a very true device in this movie.

Just because Naked Trip is not a blood soaked film does not mean it does not pay homage to real exploitation classics. There’s one scene where a mobster searches George’s flat and finds a copy of Absurd (again, brilliance!). This is the kind of moment that puts a smile on the face of any genre fan, and you can’t help but admire Bakshaev for little things like that. And while we’re on the topic of admiring, you gotta give props to the cinematography. just look at the screen caps and you can see what I’m talking about.

Now, here’s the best part. When everything comes to a head, George lets it all sink in. He weighs out his options, goes a little Travis Bickle, and makes the decision most level headed people would. It’s not Hollywood, and this is no traditional ending- and that’s why I love indie films. Bakshaev ends his film on a somber, almost tragic note, but it’s how we would act if put in this character’s shoes.

Naked Trip was meant to be a exploitation throwback, and it is (Nazi flag cape, anyone?), but at the same time it has a very true to life feel to it. Eastman doesn’t flip his shit and wage a one man war- he goes on the run with his semi love interest. The ending will probably let some people down, but so will life, and that’s what I took away from this movie. Sure its got the typical "zero budget film" curse like a few rough scene transitions, but it’s a very well made and thought out film. 8/10

This was a promotional copy, so there will be no Picture, Audio, or Extras reviewed. However, I must say this DVD came with a making of featurette and the trailer.