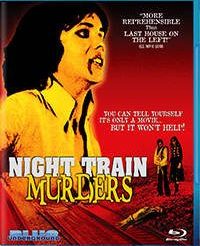 The Film– On a street in Munich, Germany two thugs cavort around causing all kinds of mischief. Things like beating up a Salvation Army style Santa and cutting a woman’s fine fur coat just for shits and gigs. These two idiots are named Blackie and Curly, but since Blackie looks like Dario Argento crossed with a pedophile, and Curly just looks like a dingy, strung out Seth Rogan, I’m going to call these two Pedargento and Meth Rogan.

Just kidding, I’m not that shallow. Yet. Anyways two female students, Margret and Lisa, are planning to take a night train to Italy and stay with Lisa’s parents for Christmas. Well after boarding the rail equivalent of a red eye flight, the hooligans from earlier decide to jump aboard too (because making like a hobo is the best way to avoid the police, just FYI).

Also aboard the train is the mysterious Lady (‘ol Helga from Deep Red), a nameless passenger who has some odd pornographic photos in her luggage. Boy, I really hope this woman doesn’t turn out to be some kinda sexual deviant… Lisa and Margret see this as a chance to be rebellious, smoking cigarettes and hiding the stowaway thugs from the ticket checker. This puts them in the eyes of Blackie and Curly, who begin harassing them.

The Lady gets up to use the restroom and Blackie follows her in, forcibly copping a feel in the process. Her demands for him to stop have no effect, and she becomes aroused by the incident. The two end up fucking on the toilet. So remember guys, if a woman says no, keep groping her until she gets in the mood. And if she happens to have mace or a stun gun, no pain no gain. Oh the rules of attraction you learn from 70’s exploitation.

Well the sun sets, so the girls find a cabin to tuck into for the night. While they’re having a Christmas dinner, the thugs and Lady decide to share the compartment with them. What starts out as awkward sex talk quickly turns into the girls being forced to strip at knifepoint. Blackie even pulls a voyeur from the hallway in to rape Margret, which he gleefully does.

Well it’s night, and they’re all on a train, so now it’s time for the murder. I really don’t want to give too much away, but let’s just say something gets forcibly inserted into something, and the result of this equation is something that will make anyone double over into the fetal position at just the thought of it. By morning both girls are dead and have been dumped from the train.

By now you can guess exactly where this is going- girls not there, parents take the goons back with them for some stupid reason, then realize they killed the girls and exact brutal revenge. Oh did I mention Lisa’s father is a surgeon who happens to have many an instrument of mutilation scattered around his home? Or his double barreled shotgun? Yeah, this is not going to be pleasant, but boy is it going to be cliché!

Out of the slew of illegitimate Last House on the Left sequels, and believe me there are many (though nowhere near the number of “sequels” Caligula has), Night Train Murders has got to be one of the most well known- but only because of the whole BBFC fiasco. If those British tightwads hadn’t gotten their panties in a twist over one tenth of a second of this whole film, I probably wouldn’t even be writing this review.

This film was targeted as one of the socially damaging “Video Nasties” back in the late 70’s, being one of the 20 or so titles dropped before prosecution. I think the BBFC realized just how stupid this would have been and decided to just say “fuck it, it’s not worth watching again just to show that one scene. Now where did I put that copy of Cannibal Holocaust?” But Chip, what scene are you talking about, you may ask? Well quite simply my readers, the one and only scene where something interesting actually happens.

Let me just describe this movie in percentage, okay. One percent rape-revenge, one percent mean spirited with no real reason why, forty eight percent a ripoff of LHotL, and fifty percent mind melting retardedness. Now with that venting out of the way, I’ll start to lay out some examples. The two thugs are the most annoying, hate-worthy, moronic characters I’ve ever seen. I mean one of them pulls a switchblade on a cop, bum rushes him with said switchblade, then gets his ass handed to him and yells like a 5th grader who just fell off the monkey bars. How can you possibly enjoy these guys?

And the saddest thing is, the cop who just survived assault with a deadly weapon doesn’t even give a fuck! He’s just like “meh, situation resolved, this guy isn’t a danger to anyone anymore”. Things like that are what make the movie so annoying. It’s those little moments of stupidity that cause your face to twitch a bit. And that’s not even including the rape scene…

You know how Craven actually tried to create a sense of empathy for the girls in his film? Yeah well you can forget that here. Aside from the movie not caring about them, it also doesn’t even care enough to rape them. I can’t really say what happens without getting into spoilers, but it’s thoughtless, lackluster, and mean spirited for no good reason. But the saddest thing is, you honestly won’t even care or remember anything about it (except that something was placed somewhere it really, really didn’t belong).

And then to the finale. Let me just explain how the goons get to the parents house first. Wrap your mind around this people, the dad takes them back because the Lady’s knee is split open because Blackie kicked her because he was upset that she encouraged them to kill the girls because he raped them because he was trying to impress the Lady because he had raped her too because he is a fucking idiot who deserves to be flayed alive. How the fuck does a shoe cause extensive lacerations? Did this motherfucker have invisible ice cleats on or something!?!

You know how the showdown between Krug and Mari’s father was an intense, emotional moment where you knew whoever killed the other; no good would come of it? Well of course I didn’t expect any of that here, but I did expect it to actually take more than five minutes! An abridged version goes a little like this- news report- girls found dead- “oh shit that’s my girls, I kill you all”- all dead. I’ve seen short films with longer final acts.

And actually, I only said that last part to avoid spoilers, but one character is left alive at the end, and I’m pretty sure that’s the film’s way of slapping you across the face. Anyone read the comic Wanted? Well the last frame of the series is the main character breaking the fourth wall to look the reader in the eyes and say “This is my face whilst fucking you in the ass”. This conclusion accomplishes the same without even leaving its own lackluster sense of reality.

I have never seen a movie fail so hard at what it tries to accomplish. It’s moronic that it’s almost entertaining in its own brain damaging way. It’s like Last House crossed with Tommy Wiseau’s The Room. Notable for only the Video Nasty enthusiasts, or complete masochists that enjoy God-awful cinema (which I am sadly) Night Train Murders is poor man’s Last House on the Left knockoff. It’s got its moments of idiotic bliss, and one scene of noticeable violence, but it’s far from “good” by any measure.

The Package– Blue Underground has done a fantastic job with this transfer. With a film that takes place in a mostly dark, cramped train, the excellent work on the black levels and colors let every detail pop. Nothing is muddled or pixilated, and the overall look is crisp and firm.

The release comes with the original English Mono restored n DTS-HD. The volume levels are spot on, no distortions at all, and everything is clear and easy to hear. There are also the optional subs in English, French, and Spanish (oddly no Italian or German seeing as how it came from these two countries).

Keeping with a red and black shaded train theme (kinda like Sins City), the Blu-Ray menu animation and logo are completely awesome. The bottom centered menu works great, and navigation is smooth.

Going from memory I don’t believe anything new has been added extras wise from the Blue Underground DVD release a few years ago. There’s Riding the Night Train, an interview with director Aldo Lado, The US and international trailers, a stills gallery, and radio spots. Overall a solid offering, but the lack of new features does drop this down a little bit.