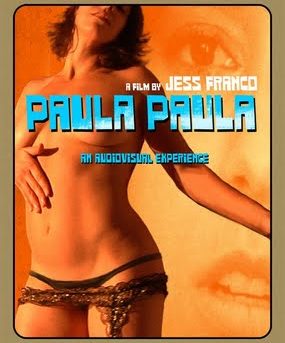 The Film– Paula (number one) is an insane wreck after the death of her former lover, the exotic dancer Paula (number two). After being questioned by a detective (a guest role by Franco’s wife Lina Romay), she goes back to her hotel room and "exercises".

After her workout (which consisted of dancing around a StairMaster wearing a garter belt), she sits down and begins to hallucinate about her dead lover. What follows is a psychedelic trip that begins with dancing and ends in sex and murder!

Okay, let me go ahead and say I’m not the biggest Franco fan in the world. While most of his films are great fun, some are physically impossible to watch, just like Oasis of the Zombies. Paula-Paula reminds me of his works like The Diabolical Dr. Z, only not nearly as good.

So with that pencil thin plot, the movie is able to set up nothing more than an hour of slow motion, digitally altered dancing and lesbian sex, and it sounds much cooler than it actually is. If you thought Sledgehammer abused slow motion, you’ll have an aneurysm while watching this movie.

This film seems like Franco filmed in about three rooms of a hotel building, put into Windows Movie Maker, and clicked every goddamn effect option in the program. I understand that he was aiming for an audio-visual experience, and I think he did alright considering the budget, but the final product is a one trick pony that lasts for way too long.

Franco has wanted to do a film like this for most of his career, and unfortunately the budget and timing was against him. I love his enthusiasm and passion, but there’s something about seeing a shot on DV film by Jess with a flat-screen T.V. in the set that takes you out of the experience.

Given the circumstances and the passion from the film maker, the result isn’t nearly as bad as it could have been. Maybe people who enjoy Franco’s work more than me will absolutely eat this movie up. I’m a diehard Argento fan, and I greatly enjoyed Giallo, which oddly enough suffered quite a number of the same problems as Paula-Paula. The experience depends solely on the viewer, and while I didn’t enjoy the film, I respected the dedication Franco has.

There’s about eight lines of dialog in the entire film, and everything else is a smooth Jazz score (except when something exciting happens, then it kinda sounds like the composer strokes out a little bit). Seeing as how there’s hardly any place for error in the audio, my only issue here is the subtitles. It’s a minor issue, but the font is pretty small. Other than that, everything else works great.

Intervision has included an introduction by Franco (filmed half an hour after completing the film), and two featurettes where he talks about contemporary film making and Paula-Paula. These extras help you understand what Franco was working with when he made the film, and if you don’t like the finished product, then maybe these interviews will help you respect it like they did me.