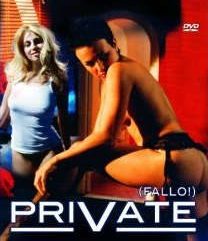 The opening segment, Alibi, is about a couple vacationing in a Moroccan hotel. After they got off on the girl’s retelling of a gynecological exam, her boyfriend gets the idea to let a Moroccan get her in the ass while he gets blown. After the hotel’s room server sneaks a peak of the girl’s ass (and shows an obvious seal of approval) while delivering breakfast, the boyfriend decides he’s the guy, and sets out to recruit him to him to be the third member of a sex act most commonly known as "The Spit-Roast".

Next is Double Trouble. A well off tennis player has been giving private lessons to the wife of a network head. After their practice, both players head to the showers to wash up (and get dirty in the process), where the instructor persuades his partner to convince her husband to give him a T.V. show. Well, as it turns out, the instructor’s wife is with the tennis student’s husband, doing whatever it takes to get a job as a news host for the network…

Two Hearts and a Hut begins with a German couple, who happen to love bondage, checking into an inn. The chef and maid of the inn are planning on making enough money to open their own hotel, but that’s still a ways off. The maid ends up taking part in the German’s bondage games, which leads to an odd lakeside conclusion with her chef boyfriend.

Then there’s Jolly Bangs, where a couple spend their honeymoon talking about past partners on a nude beach. The wife is recalling all of her "jolly bangs" to her husband, which she says were just for fun or out of necessity. After a few stories gets the guy’s juices flowing, he demands his wife to cheat on him, using what she tells him about the affairs as an aphrodisiac.

The longest story in the film is Evils to Him Who Think Evil. A photographer and his model girlfriend sell their pictures to a studio, which has made them both quite famous. After a nude session, the guy tries to sneak in some anal, but his girlfriend demands he wait until their married. After his little hissy fit, he finds out they have been invited to dinner at a rich couple’s house, who happen to be fans of their photos. After some flirting here and there, the photographer begins to get frisky with his host’s wife, which makes his girlfriend sleep with the husband. This decision turns out to be a pain in the ass for the photographer, and (quite literally) his girlfriend too.

Rounding it out is Call Me Pig… I Like It, another honeymoon segment. While in England to celebrate their union, a teacher and her husband begin to suspect someone in the other hotel building is watching them through the window. The husband realizes there’s a red dot moving in the window (which is a cigar ember), and wants to shut the voyeur out. After a sexy shopping trip and some bi-curious changing room shenanigans, the wife returns to the hotel to give the peeping tom, which she calls a pig, one more show. Turns out the watcher is a familiar face.

Private is one of the first straight up erotica films I’ve seen from Brass. I’m a fan of his older work like Caligula and Salon Kitty (and a few of his surreal films also reviewed on the site), and I’ve seen parts of The Key and Cheeky, but I think this is the first time I’ve sat down and watched one of his post 2000’s film from start to finish. And I loved it!

Now I’m not saying I’m ignorant on the man’s work, because I was able to pick up quite a few trademarks, just based on the bits and pieces of his films I’ve seen over the years. It uses the mirror trick he’s famous for, and has his typical ass and pubic/ armpit hair fetish; as well as the "peak up the skirt" shots, and cigars. Of all these things, the only one that irked me was during the Two Hearts segment, where the German woman was smoking a cigar. I smoke cigars, most people do. If you haven’t, then there’s no way to describe how pungent and strong they are. Seeing a chubby woman completely bulldog a cigar just doesn’t work for me. Maybe I’m the only one who didn’t like that, but I felt it really brought down that segment.

Aside from that one flub, the film’s great. It’s got an unusual vibe that’s almost childish, and Brass is the only director I’ve seen pull it off. The only way I can describe it is like that of a 13 year old boy’s sex fantasies. People eager to screw everyone, and everybody get off on it, even their lovers. It is an interesting way to portray erotica, and it works. Again this is my first Brass film (at least to my knowledge), and I’m not sure how it holds up to his other works, but loved it. It’s goofy, it’s sexy, and it’s entertaining. If you haven’t gotten around to picking up any erotica recently (I can’ be the only one out there who hasn’t bought softcore in months), then I highly suggest you pick this one up.

The Package– Cult Epics has presented the film with a crystal clear transfer. The colors are vibrant, the contrast is spot on, and the picture is essentially blemish free. What else can I say about the picture quality of a film that’s intent is to show you skin, aside from the fact that it does a damn fine job of doing just that?

Private is presented in Italian with random spots of English. The English in the film is heavily accented, and looks like it could have been dubbed in. Cult Epics has included a nice set of subtitles, even for the English lines. The track sounds good and is well balanced, and the subs are accurate and are placed out of the way most of the time.