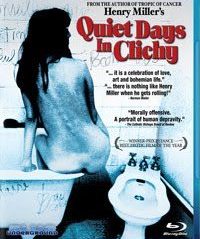 The Film– American author Joey (a character based on Miller himself) shares a flat with his friend Carl, in 1970 Paris. Joey is a struggling author who’s work doesn’t translate well into French, and he spends most of his time and money picking up women with Carl.

One day during an attempted writing session, a psychotic woman knocks on their door asking for 200 dollars in return for any sexual act the two want. After jumping on the opportunity, the lady threatens to kill them with a revolver she has been carrying in her purse.

The two keep meeting and fucking women, just as they have in the past- but both encounter a special women the same day. Joey meets Nys, a prostitute his finds irresistible. After giving her all of the money in his pockets, he stumbles by all the restaurants on the street before going to bed hungry.

Carl comes home with his dream girl- an underage dimwit, Colette, who he picked up off the streets. He plans to keep the runaway as a housekeeper and lover until she becomes legal, then marry her. They both teach her proper hygiene and etiquette, and sleep with her on the nights they don’t have enough money to bring new women up.

One day her mother finds her, and after a close call with the law, Carl loses his lover. Joey also feels withdrawn from Nys, despite the fact that money is no longer a part of their relationship. Soon the two abandon the women they were closest to and head to Luxembourg for a weekend.

The trip makes them realize just how lucky they are to be able to find women in Paris, and decide never to leave again. Both men try to find new long term partners, but eventually just fall back into their old "fuck and ditch" routine. As the film draws to a close, Joey begins to look at all the missed chances of long term happiness he missed while fulfilling his impulses.

I first heard of Henry Miller on the episode of Seinfeld where they were looking for a copy of Tropic of Cancer that was like 20 years overdue. A few years ago when I got into subversive literature like Burroughs, and Thompson. I recognized the name, but the lure of talking typewriters and mescaline trips seemed much more appealing to me than a broke playboy trying to pick up women in Paris.

The concept is something that’s become popular recently, and even mainstream movies like Eyes Wide Shut have looked at the topic of lust overpowering something long lasting. It’s always interesting, for me at least, to see movies that show just how human we really are.

Quiet Days in Clichy is a fantastic film, but it does have some annoying flaws. The biggest flub is the random use of hardcore inserts during the first sex scene- then never using them again. For people like myself who go into the movie totally oblivious, it’s really misleading. I was thinking "so this is a hardcore film that- oh wait no it’s not. Well that was pointless".

Another inviolable thing, the film hasn’t aged too well. The ideals and theme are, like I said, pretty common in society now. And with pornography being as embedded in our culture as apple pie, it’s hard to imagine this causing such an outcry years ago. Oddly, the most politically incorrect thing that I noticed was that everyone was a chain smoker. Well that, and that cunt is the most used word…

Even with it’s problems, avoidable or not, this is a fascinating film. Arguably artistic and sexist, it beautifully shows the behavior of two men in a city full of temptation. The cinematography is amazing, and filming in black and white really enhances the disoriented and depressing scenes of the film.

It feels like Citizen Kain was locked in the Something Weird Video vault just long enough to become corrupted, or maybe the sexual version of Fear and Loathing in Las Vegas. Regardless, it’s an oddly uplifting yet bleak piece of socially transgressive film making. As the tag line says, an open mind is required.

The Package– Aside from some minor static during the really dark scenes, this is an almost perfect transfer. The levels are dead on, the transfer is top notch, and there isn’t a spot in the film that looks too soft.

The audio is fantastic as well. Perfect balance and clear as a bell. The soundtrack by Country Joe McDonald is great for the film, showing the playful yet vulgar nature of the characters. I mean, the title song encourages you to feel up your date in the movie theater while watching the film, how could you not admire that?

A great use of the Pop Up menu (modeled after a typewriter), easy navigation, and an animated Main Menu make this a great Blu-Ray disk. It’s not perfect (like some absent computer features like mouse support), but you can tell Blue Underground is more than capable of taking full advantage of this format.

Blue Underground has included two featurettes with Barney Rosst, the man who released many controversial books (not just by Miller) and almost single-handedly crippled the obscenity laws during the Vietnam era. The first is Rosst talking about the works of Miller, their ban in America, and eventual adaptations into films. The second is a clip from Midnight Blue with Rosst and Al Goldstein talking about obscenity in America. To say the midnight Blue clip is entertaining is an understatement, because both men have humorously different approaches to the same conclusion. The final featurette is an interview with Country Joe himself, where he openly states how sexist Miller was, but that his love for political incorrect-ness lead to his work on the film.