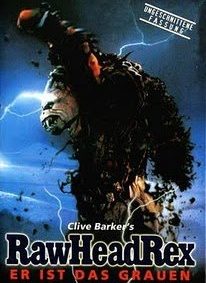 The Film– Howard Hallenbeck, his wife, and their two children are taking a "working vacation" in Ireland. Howard is a professor of anthropology, and wants to examine the church and cemetery, much to the annoyance of the pastor. Meanwhile, a farmer is trying to remove a giant stone pillar that has seemingly been in his pasture forever. Well, you never remove rocks with symbols on them- especially symbols of creatures ripping men apart! A bolt of lightning helps topple the rock, and it unleashes Rawhead Rex- a nasty Pegan demon with brutal strength and a thirst for blood. After tearing some villagers apart, Rawhead targets Howard’s family, which results in his quest for revenge against the beast. With Rawhead’s power growing stronger thanks to a corrupted priest, Ireland might have a bigger problem than they thought…

I really don’t know what to think of this movie. I love the rural Irish setting, and it will feel very surreal to some less cultured Americans out there. The actor portraying Howard looks very much like Dustin Hoffman, and the location reminds me of Straw Dogs for some reason. Seeing as how Straw Dogs is in my top 10 movies, I really enjoyed it for that coincidence. The gore is pretty good looking, and is what you expect it to be. There’s some nasty parts where people are torn apart, bitten, and pissed on, but nothing very convening or realistic. It’s just fun.

Now, the highlight and flaw of this film is Rawhead himself. He looks like a cross between a horse, bear, and Shaq- only with a Donald Trump inspired mullet. The hands and face are prosthetic, and look brown and leathery, but the parts of flesh that show through his torn shirt are as white as snow. You’re constantly reminded he’s just a rubber mask wearing actor any time the camera looks lower than his neck! From the neck up is about as horrendous too. He stands around 8 or 9 feet, so the film makers were given 3 options. Either: A) Hire two dwarfs to act as the monster while piggyback, B) Hire an Irish giant, or C) use a prosthetic. Well, seeing as how Irish giants are hard to come by, and the dwarf idea is just absurd, they used an anamatronic head and neck. Here’s the problem with that- his neck never moves. He looks as stiff as a Tetanus victim! Another thing is the actor’s head is about a foot or two below the fake one: so anytime the monster runs after someone, his head tilts back and looks up above the victim. Throw in some crappy looking "glowing" effects to his eyes and you’ve got yourself a movie.

The problem is that this film makes me genuinely like the setting. I read Barker’s short story years ago, and remember like that too. Only problem is that both of these things are very different from the final product. The short story is nowhere near as cheesy as this flick, and the settings they chose makes me wish this had been taken a little more seriously. But what we’re left with is a film so goofy that Clive Barker himself disowns it. The overall cheesy-ness of it is very entertaining, but only for a laugh or two. You can tell from the cover art this is nothing more than a man-in-a-rubber-monster-suit film, so take it or leave it. The film was entertaining, but in a Troll II kind of way. It’s not as bad as that one, but pretty close. When your monster can’t even turn his neck to see what’s behind him, you might want to rethink some things.

The Package– There’s one thing about this transfer that condemns it, and one thing that christens it. The condemning thing is it’s fullscreen. Yes, the dreaded fullscreen. The great thing is this is the best transfer available (even better than the US disk that’s now OOP). All in all I think the picture looks very, very nice (especially when compared to some torrents and bootlegs out there), and the fact that it’s fullscreen doesn’t damper this half as much as you would think.

The English audio option is just the basic 2.0, and in all honesty it’s probably ripped from the US disk. The volume and sound effects balance well, and there’s not much damage. The only negative thing I can say is that it’s not in 5.1, and I mean really, who doesn’t want to hear Rawhead’s roar echoing thought their dwelling in surround sound?

This X Rated Kult release comes in the standard Hardbox, and the on disk extras include: the German trailer, an extended scene, two deleted scenes, and two trailer shows for X Rated Kult releases (probably about 50 titles)! The trailers are really what seal the deal for me, because there’s some obscure junk on there like Franco’s Vampire Sex!