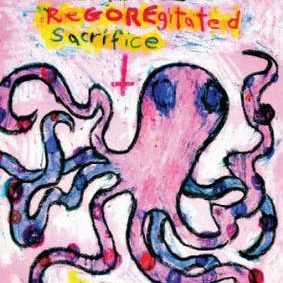 The Film– ReGOREgitated Sacrifice opens up right where Slaughtered Vomit Dolls ends (so if you don’t want that spoiled, don’t read any more until you’ve seen that film). Stripper- turned- prostitute Angela Aberdeen, after a pact with Satan, commits suicide by drowning in her hotel bathtub. All the abuse she has suffered during her years prior begin to surface; meanwhile, two demonic women, The Black Angles of Hell, begin to lure women to the hotel room, torture, and kill them. Are these events real? Or are they the product of a hopeless, abused woman’s final thoughts?

ReGOREgitated Sacrifice is in many ways the same film as Slaughtered Vomit Dolls, but it does manage to do quite a few improvements. I love it when you can tell a film maker is maturing. Valentine took many of the un-perfected elements from SVD (namely the editing) and reworked them in a fantastic way. The editing is not as rapid, but still totally insane= plus there’s more vomit, gore, nudity, and overall sick shit.

So, I don’t know if I managed to make it clear in the review, but the plot of SVD lost me. I got it, but I couldn’t really piece everything together in a totally logical way. Another improvement with ReGOREgitated Sacrifice is the story mechanics. As Angela dies, she remembers all of her past abuse. There’s the "real" memory (how it actually happened), and the "Satanic" memory (an altered, vicious and intense memory that’s either distorted by demonic influence or a dying mind). One example of this is a memory of having money stuffed into her mouth, but perceiving it as being stabbed in the mouth. It’s easier to understand, but still makes you do the work in interpreting it.

Okay, enough bullshit. You want to know about the gore, right? Well, it all takes place in the "Other" reality, which consists of a solid white room and some form of torture chair. Where SVD skimped out on the grue, this film doubles all expectations. What starts out with stabbings ends in what is absolutely the single most insane thing I have ever seen on film.

The combination of sexual torture (spiders and clamps used on vaginas in graphic detail), disembowelment, dismemberments, and tons of vomit. By the time the climax of the film rolls around, there’s ridiculous amounts of blood and puke flying everywhere, and the single most disturbing use of an aquatic animal I have ever seen.

ReGOREgitated Sacrifice is not entirely an independent film from Slaughtered Vomit Dolls, and it does rely on it for more than just story (there’s even a murder that’s preformed in the same exact fashion in both films), but it improved on, expanded, and surpassed it. ReGOREgitated Sacrifice is easily in my top 10 sickest films list, because Lucifer Valentine was able to mature so much in the time between these films, that he took the good from SVD, the bad from human nature, and the ugly from the world around us (and vomit, lots and lotsa vomit) and weaved it into an over the top, surprisingly horrendous film.

This is a screener disk, so there will be no Package review. On a side note, this disk has burned in subs in some places. Not sure if that’s something to expect on the retail disk or not. Keep your eye out for the upcoming Vomit Gore Box Set.