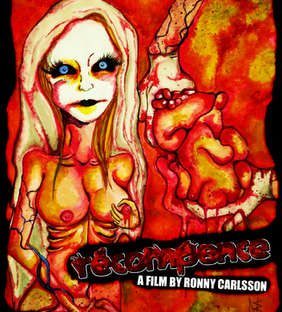 FILM- A woman awakens in the woods, bloody and battered. She crawls from a pile of brush, and lies on the ground while remembering what brought her to these woods (apparently a man in the car she was driving). After several minutes, She sees a masked figure, dresses in white, lurking in the trees in front of her. The white shrouded being vanishes after a car part mysteriously appears in the woods, and She follows in search of the ominous stranger.

Soon She finds… whatever the hell the masked “thing” is, sitting in a cabin deep in the woods. It proceeds to disembowel it’s self, yanking out fistfuls of guts. This has unexpected affects on our mysterious heroine, and she reacts in a way most trauma victims would not. She has lunch. A very raw lunch.

Now She is back at the beginning, waking up in the same spot in the same cursed woods. This time, however, the stranger is nowhere to be found. She begins searching the woods for “It”, and soon begins to unearth (literally) the true events that brought her to this unholy forest. Along the way she encounters the mysterious masked thing again, as well as several other shrouded creatures in the woods- but her true fate is far worse than anything haunting the forest she is trapped in…

Récompence is shot in stark black and white without a word of dialog for the entire 25 minute run time. It’s hard to convey a good story without words, but the visuals and style of this film hits the nail on the head. It’s a surreal tale of a woman’s struggle with something we all must go through, but she doesn’t even know it yet.

Director Ronny Carlsson run a really innovative review site called FilmBizarro. Instead of grading the film, they grade it’s contents (gore, nudity, story, effects, comedy). Aside from comedy, Récompence contains a high number of all other categories, a true example of practice what you preach. This isn’t one of those little “teens-in-the-woods-with-a-digicam” indie films, it’s a though out labor of love for people who enjoy the films weirdos like us review.

As far as the final product goes, it’s like if Stephen King’s book The Girl Who Loved Tom Gordon was molested by the film Begotten (and a few touches of Karim Hussain’s work as well) and had a bastard child. It’s surreal, gory, creepy, has nudity and a Volvo. What else could you ask for in 25 minutes? 9/10