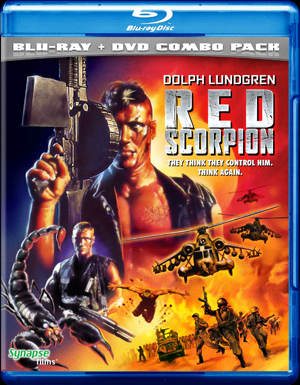 The Film– Ah the Soviet super-solider, the biggest threat to the American way of life right under marijuana and civil rights. Ever since the end of WWII (and that one little incident where we killed the Rosenberg’s for espionage, but we don’t like to talk about it), America has hated the idea of those godless Commies gaining power. So, um, they just went out and gained a shitload of power- most notably Cuba and Vietnam, but even in South Africa Russian influence took root (by force, but again shhhhhhhh). This brings us to Red Scorpion.

Lt. Nikolai Rachenko is the best of the best- the epitome of Soviet engineering. A towering behemoth of a man (with an impressive mohawk to boot) who puts all other Spetsnaz to shame, and has a success-failure rate of “every time” to “never”. General Vortek sends him on an undercover mission into the heart of a rebellion in communist controlled Africa. He is to hunt and kill Ango Sundata, the leader of the rebel army. His only chance of getting close would be to befriend Kallunda Kintash, his right hand man. Only one problem with that- Kintash is being held captive in a Soviet/Cuban/Communist African base, scheduled for execution.

Nikolai arrives at the base under the guise of a “technical advisor”. He immediately begins phase one of his mission, which is to befriend Kintash, and since he’s in prison, Nikolai does the only thing reasonable- chugs a fifth of Schnapps, beats up fellow officers, and shoots up an African bar. This lands him a free overnight stay in the cell with his target, but they get an unexpected third visitor. Dewey Ferguson.

Loudmouthed, arrogant, commie hating, 100% American (that’s for goddamn sure) reporter and supporter of the rebellion, Dewey Ferguson (played by the legendary M. Emmet Walsh) was caught by the red army snooping around the base. Insulting Nikolai beyond any and all comprehension, especially when you consider he could easily tear him in half, his blabbering draws the guard into the cell. When you have Soviet soldiers in your jail cell and you piss them off, and you’re in the middle of fucking nowhere, that’s not exactly a good thing.

So the commies do one thing we know they’re good at- begin torturing the prisoners. Nikolai sees this as his chance for ultimate friend status with Kintash, so he helps the two break out of jail. Then hijack a truck and escape the base, killing dozens of soldiers in the process. Damn, Russians really take their undercover shit seriously. Killing comrades just to gain the trust of your inevitable target- I give it an A for believability.

So since all three are on the run from a triple force of Red army destruction, Kintash decided to head to his home village where they can rendezvous with Sundata (which in case you forgot is the prime target of Nikolai). Upon arrival, they realize that General Vortek has obliterated the village with his Hind helicopter. Men, women, and children have been mercilessly gunned down, bombed, and burnt. Not everyone has been executed though, and the survivors receive Sundata as he arrives at the graveyard of a village. Nikolai sees the horrors of his faction, and begins to question who is really on the right side of the conflict.

His Soviet will represses these thoughts, and he progresses with his assassination mission. Nikolai is caught red handed (I think I’m getting good at this pun business) trying to carve up Sundata, who leaves him unconscious for his fellow soldiers to find, still thankful for his assistance in the escape. Vortek is furious with his failure, casts him out of the Spetsnaz, and sentences him to death at the hands of the Cuban occupiers. Since Russia pretty much used Cuba as a whipping boy, they decide to torture him for Soviet secrets before the execution.

Mistake number one was pissing off Nikolai. Mistake number two was stabbing him with needles like something from a Chinese torture chamber. Mistake number three was letting him escape. The best solider of the East is now out for blood against his former commanders. After a spiritual, near death journey through the desert with an African bushman, Nikolai returns to the rebels ready to fight alongside them. As they prepare to deliver some gorilla justice, he says only one thing- “let’s kick some ass”.

Dolph Lundgren, the man responsible for single handedly making every American male question their masculinity in Rocky IV. Easily one of the most iconic classic action stars of all time, when you hear his name you expect a towering, European dose of fucking shit up on a massive scale. Red Scorpion delivers these goods and more. With a controversial production, overt tones of a McCarthy-istic Red scare, and enough ‘splosions and action to choke a walrus, this is easily one of the coolest movies of all time.

The production of the film has always been a matter of controversy. Plagued by a breach of contract and unable to secure filming permissions, the crew finally settled on filming in southern Africa during the apartheid boycott. It then secured backing by an African political party, and notorious American lobbyist Jack Abramoff stepped in as producer. Needless to say, this is one serious case of development hell.

Directed by Joe Zito, who I’m sure everyone remembers as the director behind The Prowler, Friday the 13th: The Final Chapter, and the Chuck Norris vehicles Invasion U.S.A. and Missing in Action. Another factor in Red Scorpion and the films mentioned, with the exception of Missing in Action, is legendary effects master Tom Savini. Instead of machetes and pitchforks severing limbs this outing, its machine gun fire, so expect some gore in these firefights. This is way more than Bond style action here.

The story is a little different from other Red Scare films, because instead of America being invaded by commies or involved in some communist conflict, Red Scorpion focuses on the redemption of a Soviet soldier when he comes face to face with the horrors of war. Instead of the atypical American hero, here we have the “enemy of America”, in Africa, and he decided to turn the tables on his controllers and snap back. It’s unique and really a breath of fresh air in a fairly mundane genre. It also has a lot of shit blowing up.

I’m not kidding, it seems like everything in this movie explodes. Guard towers, bunkers, vehicles, tanks, and even severed arms (but sadly Peter Jackson’s sheep wasn’t on set). You know how some props just look like they were designed to be obliterated? Like buildings that you can tell are pieced together in a way that enhances the debris shower? Well when every set and truck in the movie looks like that, and you get Dolph Lundgren around these objects, you know the results will be satisfying.

Now to the smaller, more rapid explosions that produce little lead balls of instant kill. I’m talking about gunfights, and there are plenty of them. Of course since there’s Soviets, you’ve got AK-47’s out the ass, but some odd choices too. Like the RPK LMG (which I only recognized from Black Ops, so thumbs up for violent video games on the learning scale), which Dolph uses in an odd way, holding the bi-pod instead of the grips when firing. It’s small things like that that make Red Scorpion stand out, just those little deviations to action stereotypes that stick with you.

When it comes to guns, there’s one that stands out over all others. It kinda looks like some inverted Tommy Gun on steroids, and holy shit, it shreds anything in its path with extreme prejudice. You see it introduced in the first ten or so minutes, but Nikolai doesn’t get his hands on it until the final fight- and it’s worth the wait. Not only does he massacre a heavily armored vehicle with the damn thing, he also dismembers a man with it. This gun acts as a machete with surgical precision. Oh, and speaking of machete precision, he chucks one into the heart of an attacker. In the midst of a gunfight. This really is the total package.

The acting is great, with icons Dolph Lundgren, M. Emmet Walsh, and T. P. McKenna stand-out performances as their characters would demand. Lundgren is great as the action hero, with his lines like “let’s kick some ass”, and you know, just generally being Dolph Lundgren. Walsh masters his role as Ferguson, constantly bitching about everything from the heat to the commies to not being able to get a bacon cheeseburger. And the late McKenna, who I will always remember as the slightly too-kind magistrate who ate some buckshot in Straw Dogs, plays a great and generally loathed villain.

As far as action films go, this is one of the best examples of the golden age. Despite the politically charged plot, it still manages to be a thoroughly enjoyable and satisfying experience. Great acting, effects by Savini (what more needs to be said), a ridiculous amount of explosions, and a genuine sense of badass-ness oozes from the whole thing. It’s not the smartest movie out there, but is has enough action and seriousness, with just enough over the top shit, to make it one of the essential action movies of the 80’s.

The Package– Synapse have presented Red Scorpion with a beautiful 2K transfer that is crisp and blemish free. There are some scenes, especially the darker ones, where heavy noise can become a little bothersome, but that’s about as far as anything negative goes. 9/10

The audio track is a DTS-HD MA 5.1 specifically tailored for this release. Perfect balance, clear dialog, and not a single distortion to be heard. And that’s saying something for a movie full of yelling, explosions, gunfire, and wisecracks. This is one of the best sound mixes of the year, maybe even the best.

The standard Synapse tabbed Blu-Ray layout. Navigation is easy, and the pop-up menu functions during all playback. Overall a simple yet solid release, just like Synapse is known for.

The first featurette is Hath no Fury, which is an in-depth interview with Dolph Lundgren that starts with his life before acting, his road to fame, and his eventual status within action cinema (as well as a lengthy section on Red Scorpion). Next is Assignment: Africa, an interview with producer Jack Abramoff, and finally Scorpion Tails with Tom Savini. There’s also some behind-the-scenes footage, the theatrical trailer, and some TV spots. Physical extras included are a very nice set of liner notes by Jérémie Damoiseau, and a reversible cover.