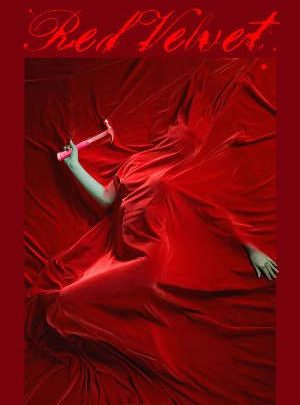 Henry Thomas and Kelli Garner star in possibly one of the best horror films of the decade, Red Velvet!

The Film– Aaron (Henry Thomas) and Linda (Kelli Garner) are neighbors in the same apartment complex, yet they have never spoken before. After a huge fight with her "dumbfuck" boyfriend, Kyle, Lynda heads out to do some laundry. Aaron follows (wearing is trusty white jumpsuit), and they soon begin a conversation. He has had to listen to their bickering for months, and is not very friendly. In fact, he’s a total asshole for a majority of their conversations. After chastising each other for a while (and talking about how important it is for Aaron’s suit to be stain resistant), they both go out to eat at a local Thai restaurant. They both dislike each other, but are fascinated just the same. Linda explains that she was fighting with Kyle because he wouldn’t take her to a birthday party her friends were throwing in a cabin in the woods. Aaron admits he is a storyteller, and after several little stories (such as a humorous accident featuring Kyle and a killer ninja in the Thai kitchen) agrees to make up a slasher story about Linda’s friends in the woods. This begins the second story arc, and we’re introduced to a group of friends who are systematically dispatched by one of the best slasher killers in cinema history (who also wears a white jumpsuit). After half his tale is over, the duo head home, where Linda finds Kyle has vanished, and the apartment in the same state Aaron described in his story. Believing him to have left with friends, Linda is furious, and Aaron offers to take her to the party. On the way there, he finishes his story, and when they get to the cabin, everything unfolds as Aaron’s story comes to an end.

Red Velvet. Complicated? Yes. Artistic? Yes. Amazing? Hell yes. I love this movie. Aaron and Linda’s love-hate relationship is perfect for this story. She’s not too eager to aid or listen to the story, but she enjoys it because she feels left out by her friends. The story takes the typical clichés in stride, and deconstructs them with a sense of humor and creativity that makes Scream look dumber than Tales of the Quadead Zone. The killer is perfect. Motive, weapons, outfit, mask, it all works. The scene where they discuss how the mask will look is one of the highlights of the movie. Most flicks like this have let down endings, because they try to tie up loose ends. This film, however, has one of the craziest endings I have ever seen. I’m STILL trying to figure it out, weeks after my initial viewing. the re-watch factor is ridiculously high with Red Velvet. In subsequent viewings you’ll notice hints and little surprises everywhere- even on my third sitting I was picking up on little things. Something I must also point out is that this was shot on Super 35mm, and shows us that computer effects can work in some movies (unless you listen to the commentary, you wouldn’t even know it was CG). With several "story in a story" plots and an ending that unravels just as many knots as it ties up, Red Velvet has to be one of the best slashers of the year.

The Package– The picture is spotless. There’s not much more I can say. There’s some CG added to enhance the "story" feel to the tales Aaron makes up, and some to enhance the gore. Like I said, the CG is transparent in the film, and is the best I have seen in a horror film to date. Cinematography is outstanding, and what Suspiria did for red and blue this film does for every color in the rainbow! I’m thrilled that as of 2009, there are Slashers are still being filmed on 35mm (and not being whored around by the director ala M-S-P). Red Velvet proves definitely- 35mm>DV.

The audio is great, but not perfect. There was some volume fading, but no blemishes or transfer issues. Most indie films have volume issues, and this only has a mild case. You won’t have to fumble with the remote every time the scene changes, and I have had to do that on more than one occasion with flicks like this.

On to the extras. We get: a behind-the-scenes feature on the film’s special effects and actors, commentary with the filmmakers, a slide show, and the "Maniac" music video. The commentary, which helps point out some of the Easter Eggs packed into every scene, is really awesome- and I’m someone who NEVER listens to commentaries. These extras, while spares in quantity, are great in quality, and make this disk well worth the price.