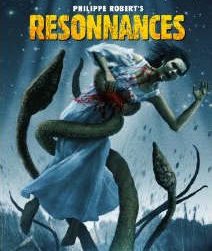 The Film– Centuries ago, a meteorite crash landed in the forest surrounding a castle in the French mountains. Something hitched a ride to earth that day, and has been feeding off people ever since. It tracks you based on sound, it lives under the dirt, it has tentacles that rip apart anything it clutches, and it’s always hungry.

Three friends and their girlfriends (more or less) decide to spend the weekend away from the city, and, of course, choose the creature’s home as their destination. After some prep work and pre-trip dinner, the girls lead the way. While the guys follow behind, they soon run out of gas- but luckily there’s a station just a few feet ahead. After filling up, they are unable to find the manager.

Before they leave, a mysterious guy, Sebastian, pops up. He explains that his car broke down a few miles away, but since the station is vacant, he has nowhere to go. After hitching a ride with the guys, we find out Sebastian just might be the reason the station was vacant, seeing as how he’s an escaped psychopath from prison.

The mountain has a ghost story about a While Lady who travelers have seen hovering along the side of the road. Well sure as shit, she pops up right as the guys drive by. While distracted, a tentacle slaps their car off the side of the mountain. When they come to, they realize that not only is there companion a serial killer, but that the creature is lurking underground. The guys try to find a way out, but after Sebastian goes totally crazy, the creature attacks, and they realize the girls were probably dinner, their outlook begins to turn grim.

From what I understand, this film was made on a non existent budget, and it shows big time. So let’s go ahead and get the bad stuff out in the open. The creature, as well as some other things like the car crash, is entirely CGI, and it looks hideously amazing. There’s a scene where some kind of animal runs out of the woods, and at first I thought it was the monster, then I assumed it was a bear. Finally, after hearing it squeal, I realized it was a boar. It’s a really ridged, one motion animation that looks like it belongs in one of the Asylum "Knockbuster" movies.

That’s not to say it’s painful to watch, because actually, it’s enthralling. It looks so, so bad that it’s amazing (plus the creature looks nothing like something that should be underground, and when it reveals its self you can’t help but laugh at what it resembles). The movie was filmed in standard def non anamorphic, and the transfer leaves static everywhere (which I’ll get into later), but the odd static combined with the hideous CGI makes for an oddly surreal experience. The best way to describe it is "Tron in horror movie form".

There’s some really cool effects that look like miniatures. The scenes of the creature rocketing through the forest is really impressive, and kinda reminds you of those old disaster and monster movies where everything that was destroyed was a scale model. There’s not much gore, and nothing graphic is ever shown on screen. One hilarious moment is when the guys stumble upon a boneyard and start puking everywhere. Why the hell would you puke at bones? They don’t smell, there’s no viscera strewn about, so why yak at long dead corpses?

Resonnances really doesn’t know where it wants to go. It’s a psychological thriller when the killer is on screen, it’s a creature feature, it’s a comedy, and in some places it’s a ghost story. It all flows good, but it’s totally uneven in every way possible. You can tell this was made for the love of the genre, and is in no way serious. It’s hokey and fun, and in all honesty, what else do you need? Imagine a French version of Mega Shark Vs. Giant Octopus, only it makes less sense and is twice as fun.

The Package– So, there’s no denying it- this movie does not look too good. Synapse has transferred the film into anamorphic and improved the quality, but the source material had some serious flaws. There’s one scene where a character is standing on top of a tower, and I didn’t even realize he was there because the static was so bad. All you could see were his eyes, which I mistook for stars until he walked forward. It’s far from unwatchable, and it does add to the surreal and awkward nature of the film. I’m sure Synapse made the film look 100 times better, but some things are beyond their control.

The audio is the original French track with some spot on subs. Everything sounds good, is well balanced, and distortion free.

The only extra included is the teaser trailer, which also is in French with subs. Not much, but something that should be essiental on every DVD.