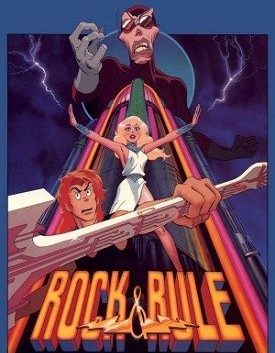 FILM– After WWIII, the human race was wiped clean (finally, fucking took us long enough). Ordinary cats, dogs, and street animals evolved into humanoid beings with a penchant for rock music. The legendary rocker Mok, the only artist to have a record hit gold, platinum, and plutonium in a single day, was the most famous of all the rockers.

After his final concert, he lock himself away in his mansion, located in the mountains surrounding what is known as Ohmtown. Obsessed with black magic and satanism, he began looking for a way to summon a demon to earth. No smoke, no mirrors- a real demonic being that would give him unlimited power.

After working with a supercomputer for years trying to find a way to summon this beast, Mok discovered the key to opening the portal is a one of a kind voice. He began scouring the land searching for this unique voice (which a computer-linked wristband will identify), but has had no such luck.

In Ohmtown, a band composed of Omar, Angel, Dizzy and Stretch begin to play a show in a dingy music hall. After Omar’s voice causes the owner to pull the plug, Angel decided to try out her new song. The borderline narcissistic Omar storms off in a fury, but not before Mok arrives at the joint to continue his search for the special voice. As soon as Angle begins to sing, his computer identifies her as the voice he needs.

Mok invites the band to his mansion under the pretense of signing them. Once inside, he kidnaps Angel while his henchmen hypnotize the other band members. He launches his personal blimp to take them to Nuke York, where he plans to put on his comeback show at Carnage Hall, and release the demon.

The dim witted henchmen kick Omar and the band out of the house, where they steal a police car and high tail (I’m sorry, I couldn’t resist that pun) it to Nuke York in hopes of finding Angel. They believe she abandoned them for Mok, and are completely oblivious to her kidnapping.

After some major setbacks, Mok is forced to come full circle to Ohmtown, where he plans to put on his final show in front of a sold out audience. While Omar, Stretch, and Dizzy try to piece together why Angel would ditch them (Mok used a little trickery to make them think Angel decided to go solo), the concert begins, and Mok, quite literally, unleashes Hell.

Most readers know I’m a huge Unearthed fan. Rock & Rule was among their first DVD titles, and, for some stupid reason, it never looked appealing to me. When I finally put the damn thing in my player, I knew that I should have ordered this with my Guinea Pig set all those years ago.

The film uses a unique, almost angular animation that gives the characters a very close resemblance to their real life actors. Angel look distinctly like Debbie Harry, and while Omar’s likeness to Cheap Trick vocalist Robin Zander isn’t spot on, you can still tell he’s in there. What really took me back was the uncanny look of Mok. He’s fucking Iggy Pop, that’s it. You don’t look at him and say “well he also could be based on…”- no, there’s no doubt that he’s Iggy.

The story is rife with satire, everything from war jokes (Nuke York, Ohmtown, ect) to all those “rock is the Debulz music” rumors. Mok is a vain, Satanic coke head rocker who is the archetype of parental fear. It’s absolutely hilarious how far they go to make him evil, yet still badass.

The music is fantastic. The already mentioned Debbie Harry, Cheap Trick, and Iggy Pop wrote music for the film, as well as Earth, Wind, and Fire. If you like classic rock, then you’re going to be in heaven by the end of the film. I mean come on, who can hate Iggy Pop, the man who practically created a fetish for peanut butter?

Rock & Rule is a great film with some trippy, edgy animation, great music, and darkly humorous satire. It’s got some stupid moments, and at times it drags it’s feet, but as a whole it’s a crazy, highly enjoyable film. If you’re more into the gory side of Unearth’s library, I highly recommend you check this one out. Maybe you’ll feel as underprivileged as I did. 9/10

PICTURE/ AUDIO– Unearthed has released this Blu-Ray in a High-Def Widescreen transfer that is utterly gorgeous. Blacks look great, color levels are spot on, and the quality is damn near perfect. This is hands down the best this film will ever look. 10/10

The 5.1 audio track will violently assault your ears- it’s that damn good. It’s perfectly balanced, with the background music at a nice volume that doesn’t drown dialog, but when it’s rock time, the songs sound fan-fucking-tastic. I’m not sure how these transfers compare to the DVD release, but even for Blu-Ray standards this is pushing the bar. 9/10

BLU-RAY– Here’s the Achilles Heel of the disk, the Blu-Ray setup is severely lacking. Everything is designed around static menus, even the Pop Up menu. You can click on the chapters from the Pop Up and it will take you to a static chapter list that you can access from the main menu. It’s not terrible, because it uses good font and is easy to navigate, but this setup is barely a notch above DVD. This is the first Blu-Ray for Unearthed, and I don’t hold this against the release because it is a damn solid transfer, but the menu navigation and setup needs significigant imporvement for future BD releases. 4/10

EXTRAS– The most significant extra is the CBC cut of the film with a different actor voicing Omar and some slightly more mature themes. This cut looks rougher, probably from an analog source, but it’s beyond watchable. There’s also a short “semi prequel”, The Devil and Daniel Mouse, as well as the making of. Also included is a making of for Rock & Rule, the trailer, and a wrokprint cut for the end of the film. 10/10