Schoolgirl Report 7: What the Heart Must Thereby Movie Review 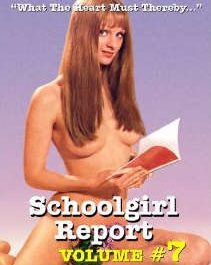 The Film– Schoolgirl 7 begins in a court room, where a group of girls and a guy are on trial for operating a brothel. They were turned in by an angry ex-client, who got pissed when he was denied by one of the girls. This sets up the frame work for the rest of the film, where the girls

and spectators tell stories about all things sexy.

The first yarn is from one of the accused, where she talks about her first sexual encounter (which is looks like rape by Spicoli, but she doesn’t care, so meh), how she became addicted to sex, and how she was "paid" for her services originally. Before entering the brothel, she would make guys do her homework before they had access to the goods.

While waiting outside the courtroom with the parents of the accused, the angry client decided he needs to tell them just how corrupt their children are. His story is about a man who runs an ice cream parlor, where three girls get free ice cream by letting him peak under the table. Eventually they decide this is too much effort, and agree to sleep with him in exchange for one years worth of frozen treats. Everything works out well until the owner’s coke-nosed wife shows up.

Not wanting to let the pedo show them up, the parents tell him a story about a girl who uses her body to lure men to a secluded cabin in the woods. Instead of getting a quickie, they get the shit kicked out of them by her boyfriend and his two goons, who end up robbing the men. During their latest robbery, a priest (who’s out photographing butterflies?) sees what happened. After some tragic events, the girl eventually realizes what she was doing was wrong.

Back to the court room, where the geeky straight A student is called to the stand. Her story began with lots of mail order sex literature, which quickly becomes the building blocks for her fantasies. Eventually, she ends up seducing her dad’s business partner/ best friend.

As if this movie wasn’t weird enough the defense decided to tell their closing argument in softcore sex fantasy form. This segment is actually easy to spoil, but essentially it’s about a girl who’s willing to sleep with her teacher at all costs. After his argument, the sentencing is reached, and almost everyone goes on their merry way.

I’ve only seen about half of the Schoolgirl Report films, so I’m not that well educated on them; but I have seen enough to know they’re just kooky softcore films. This one is no different, going from a sex comedy to a pro Christian film within 5 minutes? I can’t say many films do that, so this one gets an A for originality.

There’s not really much you can say about this film, because it’s mostly visual or the segments are too quick to really talk about. In all honesty, I wish they would have scrapped the courtroom frame story idea, because the best segments are told by the spectators, not the girls. Any way you look at it, this is one odd movie in an already odd series. If you’re a fan, then you already know what you’re getting. If you’re new to the series, you’re going to have a good time. Regardless, this is a pretty fun film that ends up all over the place, but in a good way.

The Package– I’m going to guess there were two sources for this release, and one was a VHS. I can’t remember the official term, but you know when you watch a VHS and these horizontal lines seem to shoot out from dark surfaces? Yeah it’s got a bunch of that. And grit. But if this is sourced from a tape, those things are nearly impossible to work with. Regardless, it’s not the best transfer, but it’s far from unwatchable.

Impulse has included the original German track with subtitles. The subs are for the most part spot on, but German is a difficult language to translate. I know. I speak it (at least enough to survive an Eli Roth movie). The track is pretty clear, but there’s the expected hiccup here and there.

No extras to speak of. You get a static menu and chapter stops, das ist alles. 0/10