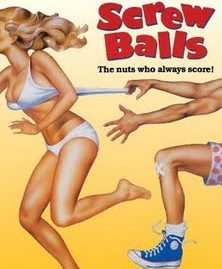 The Film– Screwballs begins with five Seniors of T&A High (two nerds, two suave lady-killers, and the new guy at school) getting detention for various sex-related mayhem. One had mirrors rigged to see up skirts, one was getting a little too intimate with the French language, one mistakenly wanders into the girls locker room, one poses as a doctor to give breast exams, and one takes the term "meat locker" a little too seriously. The center of their suffering is Purity Bush, the queen bitch of T&A High. This frumpish virgin with a large bust is the object of lust for every male on campus. These five oddballs become friends, and vow that by the Homecoming game, they will have feasted the eyes on Purity’s boobs. As each try and fail, they begin to peruse other conquests- such as the chemistry teacher and the resident nympho. With time running out, will this motley crew be able to get an eyefull before it’s too late?

I’ll admit this here, I’m not a fan of 80’s sex comedies. I never understood them. Most took place in the 50’s (Screwballs being one), but everything is blatantly 80’s- and they all seem to have the exact same gags and plot. I understand kids fell in love with these back when cable was king, but I grew up in the VHS generation. I remember browsing rental shops, not channels. Maybe it’s an age thing, but I never fell in love with Porkys, Animal House, or any other National Lampoon flick.

With that said, I actually enjoyed Screwballs. The main selling point is it’s NOT like every other sex flick of the 80’s. This isn’t a group of nerds trying to score, it’s a diverse sect just trying to see some boobs. It’s less ambitious, but just as funny. Also, this film has a political undercurrent that’s hysterical. I grew up in the 90’s, so I never had to deal with the Regan-Bush era. I remember "I did not have sexual relations" being the headline, not "Tear down this wall, Mr. Gorbachev". There’s several scenes poking fun at the Cold War (such as a kid in a gas mask at school), and it’s amazingly funny how politically correct the film is in that aspect (or maybe it’s just the history buff in me).

Now on the opposite side, a student humps his chemistry teacher, accidentally setting off a chemical explosion in the process. It amazes me how politically correct it was in the 80’s, but how UN-correct is is today. In today’s post Columbine and Mary Kay Letourneau era, this film would be ripped to shreds by society. I love transgressive nature in general, and I think that most 80’s films are ridiculously transgressive without even knowing it.

There’s a nice balance of spoken humor ("fuck a duck it’s Roach!) and slapstick gags (bowling ball thrown onto a penis and blasted off after some women arouse him). The satire-ish nature of the picture is never boring, and the uniqueness of this makes it a fun watch. Coming from someone who doesn’t care for this kind of thing, I think that’s pretty good on the film’s part.

The Package– This one of the hardest-to-find films Severin has tracked down (I believe it took over 3 years). With that info, I figured the quality might be poor. I wasn’t far off, because there’s some bad damage in at least half a dozen spots. It’s not Severin’s fault, but it is there. The scratches are not too bad, and the flesh tones and colors look nice. With the materials given, Severin managed to make Screwballs look a step above presentable.

The audio is pretty nice, but has some weird places in it. The volume never fades, but it just sounds softer. I’m pretty sure this is a post-production bug, but it’s just bizarre. Aside from that minor issue, Severin cranked out a superior audio track.

Severin has included: director’s commentary, an interviews with director Rafal Zielinski, co-writers Linda Shayne and Jim Wynorski, star Kent Deuters and SFX artist Gerald Lukaniuk, an interview with Canuxsploitation Scholar Paul Corupe, Mr. Skin Talks Sex Comedies of the ’80s, deleted scenes and the trailer. All this rounds out to a very nice release of a film that is very personal to the people over at Severin.