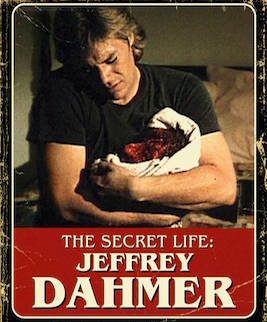 The Film– The film begins with a young Jeffrey Dahmer, freshly discharged from the military, moving into his grandmother’s house in Wisconsin. Through narration, Dahmer explains that his grandmother was the only person he ever truly loved.

Things seem to be going peacefully for Dahmer, but deep down, he’s a ticking time bomb. He explains his alcoholism, homosexuality, and fascination with cutting up roadkill. His life changes one day when he picks up a hitch hiker, who agrees to head back to Dahmer’s pad for a few beers.

After working out (believe me, it looks as awkward as it sounds), Dahmer makes a move on the hitch hiker- and is met with a hostile rejection. Instinctively, he picks up the weight and smashes it over the guy’s head. Dahmer proceeds to drag him into the crawlspace and dismember him with an ax.

Like a rabid dog getting its first taste of blood, Dahmer begins looking for new victims. His trampling grounds are gay bars, and after picking up his stud for the evening, they head to a hotel room. Jeffrey blacks out from being piss drunk, and awakens the next morning to find his lover dead. In his drunken stupor, he beat the man to death.

He dismembers the man in the bathtub with a power saw, and packs his remains into a suitcase- which he takes home and leaves in his room for days. The corpse begins to rot, and Jeffrey’s grandmother starts to notice a horrible smell coming from his room…

With Dahmer’s next victim, he realizes all he really wants is a companion who will never leave him. After his ritual (which by this point has evolved into drugging the victim, strangling them, and dismembering the corpse), Dahmer adds a new step- keeping a memento from the victim. In this case, he boils the meat from the skull and paints it (to make it look like a plastic model).

Eventually the late nights, stream of men entering the house, drunken antics, and hideous stench forces Dahmer’s father to kick him out of his grandmother’s house. Jeffrey moves into 924 North 25th Street, Apt. 213- the infamous apartment where he will eventually be arrested for his crimes.

His newfound freedom is short lived. After being arrested for molesting a boy, Dahmer is forced to attend AA meetings, and must check in with a probation officer (possibly the worst actress in the entire film). These slight inconveniences don’t stop him from murdering almost half a dozen additional men. But then something changes. Jeffrey decides to create a zombie…

The reason behind this experiment is to have a living, mindless, slave-like companion who can never leave. Since he’s using a mix of acid and boiling water, the attempt obviously leads to the man dying. This leads to his impulsive murders and trophy collection growing larger by the week.

Keeping parts in his freezer and dissolving the rest in 55 gallon drums filled with acid, the only problems Dahmer has to worry about are the neighbors bitching about the stench (which he plays off as a rotten rump roast). He even beats a man with a hammer, then lets him go to see if the police will buy his story. When the cops show up, but only knock then go on their merry way, Dahmer feels untouchable.

Eventually Jeffrey Dahmer lets one victim slip by- Ironically, the older brother of the boy he molested. After the police find the drugged, bleeding boy, Dahmer manages to smooth talk the cops into returning his “drunken lover” back into his custody. After the police leave his apartment, Dahmer viciously strangles the boy to death.

Not soon after the boy almost brought the whole goddamn thing to an end, another would-be victim escapes from apartment 213- but this time, the police don’t buy into the “lover’s quarrel” story. After peeking into the freezer (and finding photographs of mutilated corpses), Jeffrey Dahmer, the Milwaukee Monster, is finally caught. The film ends with Dahmer sitting in the squad car, somewhat at peace that he has finally been caught.

Pretty much since the original Texas Chainsaw, horror film makers have been drawn to the true crimes of serial killers. Films like Deranged and The Zodiak Killer (1971) took the base story and ran with it, warping the names and facts to create a sensational horror film rather than an actual dramatization.

Something around the early 2000’s re-awakened the semi-dormant fascination with serial killers- possibly the success of the TCM remake, but who really knows since a few of the “true serial killer” films came out before it. Regardless, a few independent studios began to crank out as many serial killer docu-dramas as they could. Dahmer, Gacy, Bundy, Ed Gein, and later on in the decade even BTK, Hillside Stranglers, and The Green River Killer got the “star” treatment.

Today, these “shocking true story” films are pretty much the only exposure most viewers have ever had to these killers on film. I mean, they’re even played on ShoTime for God’s sake. And in all honesty, they kinda suck. Yeah the actors look like their real life counterparts a little bit, and the stories follow the facts decently, but they’re just a goddamn bore to sit through.

Then I heard The Secret Life was coming to DVD, and immediately began to get all excited and shit. I’m a huge psychology buff, and serial killers are fascinating to me. Not even the murders, but what makes them tick. And Dahmer is one of the most interesting out there. I knew that I was in store for a gritty, unpolished, unbloated film about possibly one of the sickest human to ever live. And well, I was right. Kinda.

I really, really liked this film- but there are some flaws. First, the acting in some places utterly blows. Like I said earlier, his probo officer is basically just a skinvelope with no personality or character. And a surprisingly large number of the victims are flat as well. Carl Crew (who people will remember as one of the cannibal brothers in Blood Diner) gives a solid performance as Dahmer, but in personality only.

The Jeffrey in this story is much different looking than the actual Dahmer. He’s usually dressed tees that have skulls or movie posters on them, as opposed to most reports that he was always well dressed and nerdy. While I’ve never seen what Dahmer’s actual wardrobe was, I highly doubt he wore a She-Devils on Wheels tee… And this Dahmer never wears the almost signature coke-bottle glasses.

Crew’s acting is actually very impressive. Some of his emotional rampages are kinda goofy, but when he delivers his emotionless, flat narration, it’s downright creepy. His apologies, happiness in being caught, and descriptions of the murder are all slightly bitter and monotone, making you feel a slight twinge of sympathy, but immediately question it.

Speaking of sympathy, there’s actually an oddly surprising level of emotion tugging in this one. One scene that comes to mind is Dahmer sneaking up on a deaf victim with a skill saw, taunting him and describing what he’s going to do with his corpse. And even Dahmer himself manages to pull that odd bit of emotion from the viewer- being disgusted with himself, but still not able to stop killing.

The only other issues I had were the number of facts changed. Well, I guess absent is a better word. There’s no mention of Dahmer’s male mannequin, his social awkwardness, or his relationship with his father. But in all honesty, does it even matter? I mean in real life his Gramma lived in Ohio, not Wisconsin, but does that really alter the story THAT much?

The Secret Life is pretty graphic, but doesn’t have the best effects. Some of the murders kinda sorta make you grin a bit at how silly they look, which makes you feel like a really bad person. There are dismemberments, stabbings, acid baths, and head boiling. Enough to make the blood ‘n guts fiends happy, but also restrictive enough to let the story and character of Dahmer be what you remember when the credits roll.

Released only a few years before Dahmer was beat to death in prison, it’s easy to see how this created a huge stir back in the early 90’s. But even when you watch it now, it’s hard to tell if it was indented to be 100% serious or a little sensational too. Either way, it’s a good horror film and an above average look at the mind of a serial killer.

The Secret Life: Jeffrey Dahmer is not the best true crime film ever made, but it never had that intention. It’s pretty much a cheaper version of Henry: Portrait of a Serial Killer. It’s not all the way truthful, some of the acting is beyond bad, and the story seems to become redundant at times (hence why I kept the plot summery a little short this time, how many times can you describe or show the same murder before it gets old). Even with its flaws, The Secret Life manages to be an interesting mix of the mentality of a killer and the gruesomeness of his crimes. In short, it’s a raw, rough film full of blood, oddly effective emotional manipulation, and Speedo undies.

The Package– I’m willing to be this was shot on 16mm, because while overall clean, there’s quite a bit of grit and damage. The image quality is pretty good, there’s just a heavy layer of scratches and “hairs” in almost every frame. The roughness of the picture really fits with the overall mood of the film, creating a perfectly unpolished experience. It’s also cool to note the transfer is the standard VHS 4×3 aspect ratio.

The audio is a gravely track that sometimes get a little too carried away. The louder scenes tend to blast out, but other than that everything is pretty uniform. The dialog is a little rough in a few places, but same as the picture, I like the roughness. A fitting, if not maybe a little frustrating, audio mix.

The only two film-related extras are a commentary track with director David Bowen and actor Carl Crew, and the original trailer. Other extras are limited to a handful of trailers for Intervision titles, including the first hint at the future release of A Night to Dismember.

We thank PromoCodeBets.co.uk for supporting the Sins of Cinema website.

Submit Your Review Below!