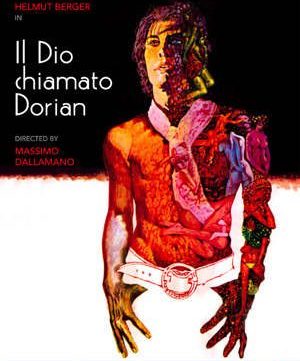 The Film– This particular version of Wilde’s story is set in late 1970’s London, with Dorian Gray being a handsome, rich young man (pulled off fantastically by Helmut Berger, the European equivalent of Tom Cruise pre-couch jumping) who enjoys his flamboyant and lavish lifestyle.

His close friend, Basil Hallward, an artist who secludes himself in a docked boat to focus on his paintings, has been working on a portrait of Dorian for some time (which includes Dorian striking a pose that looks like a Playgirl cover). His major distraction is Sybil, the girl who he’s become smitten with.

Sybil is a talented actress reduced to performing in dingy theaters. After Dorian stumbles into a recital of Romeo and Juliette, she is immediately drawn to him, with returned affection. After some frolicking in tall grass, sex under picturesque trees, and a day at the abandoned Gray mansion, the two become lovers.

While the portrait is nearing completion, Basil’s friend Henry- a hedonistic aristocrat, begins to strike a friendship with Dorian (fueled by his homosexual lust). The two attend a benefit for a retirement home, and begin discussing aging, the meaning of life, and mortality.

Basil finally finishes his masterpiece, and almost immediately Dorian changes. Instead of being a semi-modest, caring man, he becomes narcissistic and self indulgent. He develops an anger for the painting- claiming it will never age while he will eventually lose his youth and good looks.

That night Dorian goes to a party hosted by Mrs. Ruxton, with all of his well-to-do friends in tow. Ruxton is interested in buying the land Dorian owns to make a waterfront resort- but you can tell she has other desires as well. After the party begins to grow dull, Dorian invites the guests to come watch Sybil perform later that night.

Since Sybil has only loved acting before meeting Dorian, and with all her love now focused on him, her performance is a little more than embarrassing- which is the exact response Dorian gives. After he makes his disappointment more than clear, he decides it’s time she meets his elite group of friends.

When Dorian tries to introduce her to his friends (rather degradingly), she sees through his arrogance and leaves him. He chases her to a bus, where she angers him and he slaps her. Dorian then leaves Sybil on the bus as it departs. Distraught, she runs off at the next stop, back towards her lover, but steps in front of a car and is killed instantly.

The nest morning Dorian realizes his portrait has aged- the brow now looks wrinkeled. Confused at first, and upset about the fight the past night, he decides his luxurious life is not complete without Sybil. At first distraught over her death, he quickly realizes this only means he can do whatever he wishes now.

Mr. Gray begins his transformation from semi-self absorbed to full on narcissist- and without age. He begins to sleep with everyone, including his friends’ wives and even Henry and Mrs. Ruxton (just to name a few). With every evil act, his magnificent portrait ages- warping into a hideous, discolored abomination that reflects Dorian’s soul.

After almost every taboo has been broken, Dorian sinks into murder and blackmail. His deeds begin to pile up on his subconscious, and the portrait alone will not save the vainglorious Dorian Gray from his own demons- resulting is his poetic downfall.

While every other version of Dorian Gray ever put on film has been, for the most part well received (except The League of Extraordinary Gentlemen, fuck that movie), The Secret of Dorian Gray has met some harsh criticism. Is it exploitation or art, horror or drama, sensational or distasteful? Some believe it’s nothing more than a classic story perverted into some typical Euro-Sexploitation flick- yet others hold it a great contemporary adaptation of the story. In all honesty, both parties are dead on either way.

Let’s get into the sex and violence first (because who doesn’t love both of those things?). Exploitative is pretty spot on. There’s lots of sex, gratuitous nudity, and the murder is sensationally violent. It obviously could have been “classier”, but to me Oscar Wilde’s story was just as exploitative- especially considering when it was written.

I guess I’m jaded when it comes to sleaze, because I didn’t find this movie super trashy in the least. What I was caught off-guard by was the openness of homosexuality. I haven’t read the story since high school, and I pretty much spark noted the whole thing. I do remember it being pretty open about certain characters being gay and bi-sexual, but nothing too controversial by todays standards.

Now this movie, however, wants to make it blatantly obvious that multiple characters are gay (again the book may have, I might have just read a truncated version), and hides nothing about Dorian experimenting with both sexes. In a time when sexual liberation has just taken off, it seems like the sexuality- not the sex on screen- would have been what shocked so many. It’s odd to see what upsets society, isn’t it?

The Secret of Dorian Gray does tend to get a little hokey at times. One example is a 43 year old character being as gray and balding as a 70 year old. I understand the aging process has to be over-done to get the full impact of Dorian’s youth, but when you just increase the amount of baby powder used to make the actors hair look grayer, it doesn’t have the desired results.

You can tell that director Massimo Dallamano really respect the moral of the story- which is odd seeing as how Dallamano directed what could be some of the sleaziest, grittiest giallo films ever made. Yes, I’m talking about the “Schoolgirls-in-Peril Trilogy”, which includes What Have They Done to Your Daughters, What Have You Done to Solange, and Virgin Killer (also known in the US as Trauma, but on that particular outing he stepped aside and let Alberto Negrin direct).

You can tell Dallamano was still in the mindset of just getting over working with Sergio Leone, because the class and cinematography is still abundant. In fact, his work operating the camera will always overshadow his work behind one. But, just going by the slight sleaze that’s there, you can tell he was more than ready to start working on films involving large (and sharp) objects being rammed in vaginas. This is what I mean by a combo of both exploitation and art.

As I mentioned, Helmut Berger is fantastic in the role of Gray. He’s good looking, a sharp dresser (for the love of God, someone tell me where I can find a zebra print trench coat like his, it’s the must have item of the year for myself), and can be just as slick pulling off a Romeo as he can a sadist. The design, cinematography, and amazing loyalty to the base work- with Berger’s looks added, makes for an above-par version of the story of Dorian Gray.

The Package– Raro presents the film in a slightly soft widescreen transfer. Print damage is non-existent, and grain is kept at a minimum. The sacrifice, though, is a noticeable lack of sharpness in some shots. Close-ups look great, but the more the further back the camera goes, the less detail you get. It’s not a bad amount, just a noticeable one. Despite this issue, the overall clarity overpowers the lack of firmness any day.

I watched the film with the English 2.0 track, but there is an original Italian 2.0 with subs included as well. Dorian, and most male characters, sound just fine- but there’s some serious issues with a decent number of the female dialog. I’m not sure if it’s just the voice actresses, or if the transfer doesn’t compensate for their voices, but every time they even raised their voice above low volume my speakers would make a very disturbing crackling sound. And their dialog is off. I can’t really describe it, but they just sound like squeaky, muddled voices- especially Sybil. Other than that odd problem, the balance and volume are great, and the track is very neat and clean.

Raro has only included one true extra, an interview with assistant director Maurizio Tanfani. It’s an in-depth interview covering not only his work on Dorian Gray, but his career as assistants of some of the biggest names in European cult cinema- including the late Bruno Mattei. There’s also a director filmography and DVD credits. One thing Raro is doing with most of their releases I love is actually including some kind of liner notes- in this case critical analysis and some artwork.