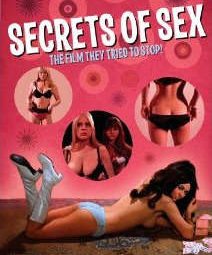 The Film– Secrets of Sex is an anthology film exploring the battle of the sexes. It begins with a proverb about a Medieval Judge and the secrets his wife has locked in a trunk, and then quickly introduces the film’s narrator… an undead mummy…

The mummy fills us in on some gender based back story before presenting the first segment. Essentially, a duo of female photographers are working a shoot on torture devices. They have their helpless male model in shackles, and intensely photograph his anguish. For the final picture, they place him on a legitimate ball buster of a device, then leave for lunch. Hoping to get an "authentic" reaction when they return, the ladies arrive to find the man, well… let’s just say blades and testicles don’t mix well.

The next segment is about an elderly, but still fertile, man who’s one wish is to have a male heir. He is set to marry a young scientist, who has found a breakthrough on the decay of female genetics- in particular, her own genetics. Of course deceit follows, and nothing ends happily.

The third story revolves around a female cat burglar caught in the act. While the thief is looting the place, the male owner captures her. While he wants to turn her over to the cops, she wants him to turn her over in a different way. But first she wants a shower. Of course the thief does has an anterior motive, and ends up leaving with more loot than she originally had stolen.

You know the film is British when it has a special agent segment in it. Agent 28 is ordered to blend into the crowd at a party and steal some documents from a French ambassador. She goes through training with a correspondent (who also takes her to see stag films), and then undergoes her mission. It all plays out with Agent 28 thinking of the Frenchman as a little too dumb, and she soon finds out what happened to the twenty seven agents before her.

The most popular segment of the film revolves around a reptile obsessed young man. He’s socially awkward and enjoys playing voyeur at a local dinosaur theme park. He calls an escort service, and soon a sexy blond shows up for some fun. Well, sex just isn’t complete with this boy unless his lizard is in the mix, and the woman flees in disgust. Before leaving, they talk about how "hip" the act would be, and while returning home, the woman realizes her stance on the matter was pretty wrong.

Secrets of Sex is a damn weird movie. It starts out really literary, turns surreal, moves into horror territory, then drama, then goofball comedy, then… whatever the hell you want to classify a lizard fetish as, and ends with the conclusion to the surreal footage seen in the introduction. And a fireworks show, the sexual kind AND the kind that make pretty colors.

While entertaining, the film is sexist as hell. I mean, it’s as if Sigmund Frued directed a skin flick. Seriously, there’s tons of of psychosexual imagery, and everything is the woman’s fault. If life teaches us one thing, it’s that no matter how impulsive and stubborn the man is, anything bad that happens to him is always the woman’s fault. It’s not necessarily that men loose in these segments, they’re just portrayed as victims (even if they’re the one fucking up).

There’s not much more I can say on the movie, because it’s alot of random ideas and imagery. What am I supposed to say about the fact that it’s narrated by a mummy, aside from the simple fact that it’s narrated by a mummy? You can’t really comment on it verbally, because it’s designed to be an experimental psychological journey (in the weirdest damn way possible). I loved it, despite the political incorrectness (where’s the fun in that?), it’s a semi truthful exploration.

You’re going to have to go into this movie open minded and just sit back and watch. I really dug the psychological aspect of the film, and it really did reflect the social beliefs of the time it was filmed. Aside from the fact that it’s a one of a kind film, the psychology behind it will be the biggest hook drawing you in. If you don’t like psychology, or thinking, its got tits. You can probably find enjoyment in that.

The Package– Secrets of Sex was filmed in 1969, and it looks pretty damn good. It’s not grit and grain free by any means, but Synapse’s transfer has good contrast, colors, and skin tones. While the picture can be a little soft or grainy at times, the overall quality of a 40 year old movie is pretty damn good.

The audio is decently clear, without much noticeable damage. One thing that kinda bugged me was the mummy’s booming voice was quite a bit louder than the segment footage. There’s no volume fading, the mummy just screams in your face during his monologues.

Synapse has included the original trailer, two short films that were collaborations between director Antony Balch and author William S. Burroughs- Towers Open Fire and The Cut Ups (if you think the film is politically incorrect, just wait until you hear the first sentence of TOF), and an interview with writer/ actor Elliot Stein (the mummy and the lizard kid). Overall a nice selection of extras, and I’m sure finding some of this stuff took some time (the shorts are older than the film).