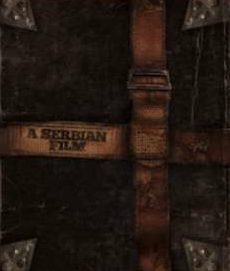 Angry at Milos leaving the DVD out in the open for their son to find, Milos explains his costar from Filthy Stud, Lejla, has called him with a business offer- one last film with one hell of a paycheck. Milos sees this as his chance to finally be done with the business, and end his family’s problems once and for all. He agrees to meet her for lunch to get the details on the film.

The next day Vukmir’s driver, Rasa, picks Milos up and brings him to the director’s mansion. Almost explosive with happiness, Vukmir begins his pitch to get Milos signed to the film. He sees Milos as an artist of fucking, the best of his craft, and is impressed by his stamina and knowledge.

Uneasy about the shoot, Milos asks his brother to look into Vukmir. Marko is more than eager to help, but is beginning to show odd behavior. Like getting his dick sucked while watching family movies of Milos, and jacking off in the bathroom after flirting with Marija (you know, like all good brothers do). For his family, Milos pushes on while his brother digs up Vukmir’s past.

While driving home, Milos suddenly begins to feel funny. He wakes up in his own bed three days later, bloody and beaten. Trying to remember what happened, he drives to Vukmir’s mansion, where he finds a blood soaked chamber and stack of video tapes from filming. Over the last days, Vukmir’s “nurse” had been pumping him full a powerful drug, essentially Viagra mixed with cocaine. This turns Milos into a sexually violent, ravenous monster that’s highly susceptible to suggestion.

His first drugging caused the mayhem in the blood-soaked room, which jogs his memory about an incident involving a tied up girl and a machete… Realizing the tapes are the only way to remember what else happened, Milos gathers them up from the director’s closet and heads out to a peaceful spot in the woods to watch them. Each cassette brings the Milos closer to the horrifying conclusion of Vukmir’s film, a revelation that goes beyond just snuff films and could break his soul apart.

I’ve came to the conclusion there are three types of controversial films. The first is the attention whore variant. You know, the films that get banned or criticized because the filmmakers want to drum up publicity (Murder-Set-Pieces and Gurotesuku for instance), Then there’s the films that get classified as controversial because some simpleton reviewer decided to focus more on the sickness than the message, just like in Salo or Cannibal Holocaust.

Finally, there’s the rare kind of film that simply became disturbing because, well, it’s just goddamn disturbing. An example would be August Underground, Guinea Pig, or Last House on Dead End Street. A Serbian Film is a mix of the latter two types, some for the good, and others not so much.

As for Serbian Film being an attention whore, well that not exactly true. The filmmakers didn’t try to get the film banned or hyped up by pulling low blows. Instead, they actually made a movie that was, and I know this is going to be hard to believe, fucking disturbing! All those “whaa whaa I’mma cry because I watched Serbian Film it’s so mean and evil and disturbing give me a tissue please and DON’T EVAR WATCH IT!!!” style reviews were from essentially ignorant reviewers.

Now is it disturbing? Of course, probably the single most disturbing film out there- but, I knew that before going into it. That’s like asking for a mixed drink then bitching at the bartender because there’s fruit juice in your booze. You know exactly what you’re stepping into.

Now on to controversial while missing the point entirely. Almost everyone has heard the whole “A Serbian Film is an allegory for the Serbian government” story, and I don’t buy that for a second. Director Srdan Spasojevi? has essentially claimed the violence is a huge middle finger to the current, government funded cinema of Serbia. That right there, I completely believe. As for the whole allegorical “raping a character in this film is symbolic of the rape of a nation”, nah, fuck that.

There are a good many films involving ultra violence as a political message, Kichiku: Banquet of the Beasts being a prime example. A Serbian Film is no Kichiku, not by any means. Oddly enough, it seems that audiences, who wanted a disturbing, harsh film couldn’t handle it, and decided to try to over-analyze the message into something bigger. No. This is a graphic exploitation film with some political motivation and bias. Nothing more.

And finally, the biggest slice of cake- being legitimately disturbing. And Jesus Christ does it succeeds. While the film is brilliantly shot, edited, and acted, the real power comes from what is shown on the screen. Sometimes leaving the graphic shit to the imagination is the best, but other time throwing it into the viewers face works much better.

The impact of seeing the images in this movie can’t be put into words. The best reference I can compare it to is that feeling in the pit of your stomach after reading American Psycho (or right before a bad case of food poisoning). Not many movies can ruin your spirit like A Serbian Film. It feels like some of your morality just died.

Maybe I’m the only person who gets this vibe, but the movie feels like a dark side of the moon version of The Wrestler. Think about it, a semi-retired ex pro who’s trying to get his life back together, only to have it all backfire. The movie is a lot smarter than it might seem, but still manages to be just plain damn soul crushing. This might be the most artistic exploitation film I’ve ever seen, offering something for both sickos and snobs with a mean streak.

And these cuts also make the climax almost incomprehensible until the very end. While the uncut version would get a perfect score, this truncated version is lower. Now for the casual viewer this will be more than sufficient, but the diehards will already have an import/bootleg of the uncut version.

A modern day exploitation film with beautiful cinematography, fantastic acting, and slight political undertones- not to mention the most sickening images ever put on celluloid, makes A Serbian Film one hell of an interesting- and disturbing, flick.

While I always advocate seeing the unaltered version of a film, these cuts really aren’t too bad (honestly not worth importing the almost $60 uncut release that’s currently in print). A Serbian Film takes a special breed to “enjoy”- this is not for horror fans, this is for film masochists. (“US Cut”) 8/10 (Uncut) 10/10

PICTURE/ AUDIO– Invincible Pictures have released Serbian Film with a beautiful transfer. Of all the versions I have seen, this is the best looking by a long shot. Colors are vivid, black levels are in check, and everything looks just fantastic. Sometimes the lighting can give the odd effect of “black blood”, but this is the film in general, not a transfer issue. 9/10

The audio mix is a DTS-HD 5.1 track that sounds fantastic. While the actual audio is pretty much flawless, it’s worth noting the subtitles are burned into the print. Again this doesn’t affect the average viewer (unless you get your rocks off to taking screen captures), but that pretty much singles out the audience for the disk as English speakers. 8/10

BLU-RAY– With a lack of set-up options and extras, the layout is quite simple. Basically a play button and chapter stops option that appears as a pop-up menu, even during playback. The simple layout paired with an excellent chapter pop-up menu (with some fucking brilliant titles, by the way) makes this a hard design to ruin, but you’d be amazed how many companies manage to. 8/10