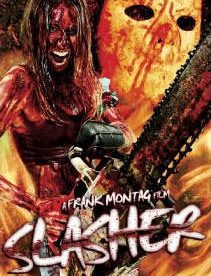 Stupid teens cavorting about in the woods get butchered by a chainsaw madman, and with that we have the first kills in Slasher. There’s some more here and there, but the story, if you can call it that, begins when a group of Psychology students decide to go up in the woods for a weekend of sex, drugs, blah blah blah.

Before the boobs and guts flop out, the teens gather round the campfire to tell a spooky story. Local legend Wolbort is the hero of this particular yarn, and he just happened to be a butcher who enjoyed mincing people into his menu. Of course this ends with the obnoxious "friend who pops out of the woods with a mask on" scene, and then everyone calls it a night. As always the killer begins his rampage when night falls, and from here on it’s a by the numbers slasher flick. Oh, and when I say "from here on", I don’t mean from this particular scene on- the entire movie is by the numbers. Just so happens that the majority of our kills are from this point on (clarity is something I strive at, so we all should be on the same page).

If it seems like I’m being sarcastic, I’m really not. Well a little, but it’s mostly true. The term "by the numbers" slasher is an understatement here, there’s even a scene where someone explains what a damn slasher flick is (but I can’t complain, I’m Mr. Clarity here people). With the slew of abominable throwbacks out there (and I use the term lightly- just because your movie has a slasher and a poster for Friday the 13th doesn’t make it a fucking 80’s slasher, it makes you a dumb, stuck up jackass who probably hails Evil Dead 2 as THE BEST HORROR MOVIE EVAR!!!1!1111!!!), I bet you’re wondering what makes Slasher different. Nostalgia and gore are here for the save!

I’m not hating on this movie in any way, I just want to convey how bland and stereotypical it is plot wise. Now that that’s out of the way, here’s the strawberry sundae. Slasher has countless scenes of 80’s nostalgia, which is hilarious to watch. Since it’s German, there’s that air of misinterpretation, much like how D’Amato’s American- intended films like Troll II had. There’s even an 80’s "getting shit done in fast motion" montage! Seriously, these teens are so satisfied with themselves, even joining up to look with satisfaction at their accomplishment, which was pitching a tent (no pun intended). Even the sex that happens IN the tent doesn’t leave them half as satisfied! Let’s see Marcus Nispel do that in his next "film"!

The surreal American 80’s vibe is highly entertaining, but the gore is where the shit is baby. I’m a huge fan of Ittenback, Flipper, Bethman, and Schnaas- all German splatter mavericks. German splatter has dwindled away with the birth of CG (even my idol Olaf Ittenbach used some in K3), but Montag (German for Monday, in case anyone cares) goes back the roots of junk like Burning Moon and Violent Shit to bring us 100% practical effects (for the gore at least, there’s a few shots of some amazingly crappy CGI). There’s chainsawings, gardening tools to the face, vaggo snipping, and so much more. I’m not going to spoil the gore, because it is 99% of the selling point to the flick. It’s predictable in terms of plot, but the murders are pure insanity. I can’t recommend this one enough to fans of German gore/ 80’s slasher fans! 9/10

Since this is a screener, there will not be a rating for Picture, Audio, or Extras.