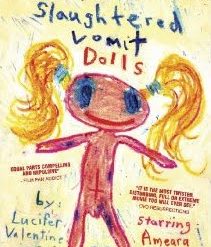 The Film– Angela Aberdeen ran away from home at age 14, after she set fire to the neighborhood church. She made her living by dancing, then stripping, and now she’s a dime store prostitute. As she claims "I don’t know what’s left… but you can fuck it if you want". Alone and in an endless cycle of being abused, she makes a pact with Satan- but even then her life still declines. She turns bulimic, and becomes addicted to drugs.

Well, with a plot like that (which kinda sounds like an edgy Lifetime movie), you’re probably wondering how the gore comes into play? Well, so am I. It just randomly starts. Someone is filming Angela on a hand held camera, choking, slapping, and generally abusing her; but we never really know who it is. The gore is spliced into these scenes, with no back story or reason. There’s a scene or two that make you think it’s in her head, but then there’s a chance of it being the camera man. Needless to say, a masked person just starts killing nude women, then by the end they have an accomplice who’s doing most of the nasty stuff.

By nasty stuff, I mean nasty, nasty shit. I will admit at first I was not impressed, because the murders were not very bloody; however, the last few murders make up for everything else. One that will always stay in my mind is when the killer saws off a woman’s arm, then sits a guitar in her lap to play. It might not sound too bad in words, but it’s seriously a sick and demented thing to see.

The editing, just like the film, is rapid fire and borderline schizophrenic. It goes from black and white to color, fast speed to slo-mo, and there is not a single shot that lasts for over 30 seconds. It really messes with your head, and feels like a music video. The sound and voices are distorted to bizarre high pitches and demonic low tones too, making this film hard to endure in some places. I’ve heard people bitch about this, but in all honesty, I liked it. This is a messed up film, and not a damn thing about it is orthodox. It did frustrate me in many places, but it added to the angst and frustration of the actual film.

When my mood, induced by the edition, matched the mood of the images on the screen, I found myself really drawn in and repulsed. Realizing your mentality is parallel to this film is actually quite disturbing, and, with me, that is something no other film has managed to do. The first time I heard this film mentioned, it was compared to August Underground, Niku Daruma, Snuff 102, ect. It’s nothing like them. I said it here; Slaughtered Vomit Dolls does not feel like a snuff film. It’s much darker, demonic, and hateful than the above films. It’s not as disturbing (pseudo snuff relies on realism, which is something this film abandons from the start), nowhere near as disturbing in fact, but it does manage to do its own thing, manipulate you, and draw you into its sick little universe.

The Package– Filmed on DV, the transfer is surprisingly clear and void of many defects like static or glitches; however, a blemish free transfer isn’t everything. While good transfer are nice (and this disk looks fantastic), sometimes you need distortions and damage. The actual quality of this picture changes from scene to scene, depending on the effects. There’s black and white, high contrast, super bright, foggy, and altered colors. While the transfer is spotless, the film it’s self is constantly blemished and altered (which adds to that unnerving and angry feeling I mentioned earlier). This is not a review based on picture quality, but effectiveness.

The audio is the same as the picture. Super clear, but my rating this time is not based on clarity. While the picture gives you a feeling of hatred, the audio really creeps you out. The slowed down voices and chattering teeth are beyond unnerving, (epically if you know the origins, which are explained in the supplements). Bottom line, the picture and audio are what convey the feelings of this movie. Regardless of how spot free they are, they get the point across perfectly; and perfect is not a word I use lightly.

Here’s a little story before I get into the bonus material. The director read my review and liked it, but said he thought I needed to review a complete pressed DVD with extras. He essentially said the extras tie up a few loose ends, and help with the overall understanding of the movie (epically the commentary). This is a highly factual statement. SVD needs to be seen on DVD with pretty much all the extra material. Included is a commentary track with star Ameara, and one with LV666 and the producer, No One Body. You get a making of, which is reminiscent of the "video consent" stingers you see at the end of those demented porn films where the actors explain they were not abused or forced to be in the movie. Some home movies of Ameara being filmed by LV666, production notes, a highly disturbing and upsetting slide show of crayon drawings, a monologue explaining the history of Vomit Gore and SVD, and the teasers and trailers for SVD and RS. The extras really add to the understanding of the film, and I hope they clear it up for others as much as they did for me.

I’d like to thank Lucifer Valentine for the pressed DVD to review. Keep your eye out for the upcoming Vomit Gore Box Set.