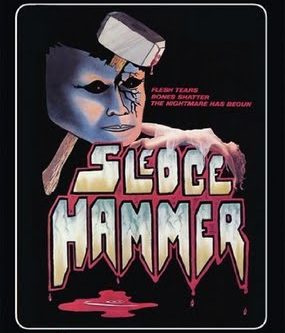 FILM– A woman and her lover plan to meet at a desolate farmhouse for a quickie, but for some unknown reason she’s forced to bring her son. If memory serves me correctly, didn’t something like this forge a certain Mr. Henry Lee Lucas? Well not to worry, she just locks him in the closet during the date. That’s a significantly better alternative.

With the kid out of the way, the couple begin to make out 80’s style. That means they just kinda act like they’re either kissing or eating a particular part of the body. Before anyone can get their grove on, a killer ambushes them, bashing the man in the head with a sledgehammer. The mother look on in horror as the killer beats her to a pulp. Something tells me this wasn’t exactly the smashing they were expecting.

Flash forward 10 years later. A gang of seven teens decide to spend the night in the old house, and why that is I have no clue. After arriving, they all have fun while throwing their luggage out of the vehicle. Yep, they seriously get the most gleeful satisfaction out of small talk, and throwing baggage from their van. The driver heads back to town, promising to come back for them in a few days.

Okay, I can’t hide it anymore. I can’t pretend this doesn’t exist. Sledgehammer uses slow motion. LOTS of slow motion. That oh so exhilarating luggage-throwing scene I just mentioned. Slow motion. The woman locking her son in the closet. SLOW MOTION. The act of reaching into a cooler to hand a girl a beer after she asks for one. SLOW FUCKING MOTION!

Well now that’s out in the open. Anyway the group head inside, and soon it gets dark out. So you know what night time in a slasher means, right? If you guessed slashing, what the fuck is wrong with you? But if you guessed food fights, you’re not only right, but logical thinking is absent in your mind. Yeah, a food fight. But it’s not just any food fight, it’s in SLOW MOTION!

So after the food fight and random clips of partying, the main character, Chuck (played by Ted Prior, brother of the director) and his girlfriend head off to discuss heart-wrenching problems in their relationship that no one gives a shit about. Then Chuck scares the shit out of everyone by telling them there was a murder in the house 10 years earlier, and the killer was never caught. Now after all of this, it’s finally time for some killing.

…after they preform a seance first. Goddamnit. I never realized how hard it is to just embed a hammer into a teens skull before. Well they have some pranks set up to scare their friends, and the expendable character goes up stairs to rig a speaker system. Turns out the seance actually summons the real killer, who it appears is some ghostly specter now. Then there’s a brain damagingly long slo-mo death where the killer punctures the kids throat.

Chuck and crew think he’s just playing a prank on them, and two split from the group to have sex. Too bad they didn’t wait until the others found that huge pool of blood in the other room, because maybe they wouldn’t have isolated themselves and became easy targets. But that’s just an educated guess.

Of course the killer hammers them to death, and everyone runs upstairs to find them dead, but oddly the killer has vanished. Instead of the hulking man, he now appears to be the small boy from earlier in the film. Wait… Wait a goddamn minute… you mean it was the kid all along?!?! Holy shit really? Wow I totally knew that from the first 5 seconds of the movie.

And the sad thing is, they keep running with this idea that the audience doesn’t expect the killer to be the kid. The fact that the son is the killer is not openly stated until over an hour into the movie. Well faced with the dilemma of either fleeing for safety into the woods, or staying in the house that’s guaranteed to have a hulking homicidal maniac with a penchant for hand tools, the guys choose the later option.

I don’t want to spoil anything past this, because it finally turns into a slasher at this point. I’m pretty sure everyone can guess who will end up dying as soon as they even see their character appear on the screen, so to keep the suspense, you’ll just have to watch and find out for yourself. Nah I’m just fucking with ya, people get beat with a sledgehammer and the credits roll. What else did you expect to happen?

So, I’m willing to bet not many people have ever seen this one before. Aside from the fact that it’s only really popular to VHS collectors (with copies reaching over $80 in the past), it wasn’t in the spotlight for very long. I firmly believe this was the first Shot on Video horror film, but only a few months later, Blood Cult came out, claiming to also be the first, and became widely more successful.

Now here’s my only problem- the slow motion. Aside from how slow the film starts out (which is not too boring considering this was the first ever home movie made available to the public), the slow motion is easily the worst aspect of the film; and coincidentally the best. This is the worst abuse of an editing tool I have ever seen. I assume this was done for padding to reach a “full length” run time, but there is no way in hell I can calmly sit and watch someone open a door for almost a solid minute.

Yeah there’s some technical errors. The effects are goofy, the characters are dull (VERY dull), and the killer is just kinda there (It’s never explained how he became the supernatural entity he is), but it’s fun. This is not a good movie, or even an okay movie- it’s just fun. I can’t think of any other way to describe it.

Nothing makes sense, but it doesn’t have to. It promises people being killed with a sledgehammer, and that’s what you get. It sure takes it’s sweet ass time getting there, but it does deliver. How this will go over on the DVD market is a total guess to me, but people who love to collect VHS, like myself, have been waiting for this one for a while. It’s atrocious and entertaining at the same time, and that’s why people are still buying tapes of it today. It’s the kind of movie you’re going to either love or hate, but as for me, I dig it. 7/10

PICTURE/ AUDIO– I confirmed from the current rights owner that this transfer was sourced from a VHS print, then edited. Now the biggest problem most copies of the film had on tape was a muddy looking over-saturated picture. This is kept to a minimum, but it still looks like a VHS. In fact, it looks very close to my copy, which is the best looking version I have ever seen (asides from this disk). Bottom line, it was shot on VHS, it looks like a VHS. What more could you expect. 7/10

Just from filming and different editing problems some scenes have dialog that’s almost too muffled to hear, but aside from that everything sounds as good as it possibly can. The awesome synth track blasts when it needs to, the characters emotionless screams are kept at a good volume, and the soundtrack sometimes just cuts out during the slo-mo parts, sparing us just a few seconds of mediocrity. A fitting sound mix. 7/10

EXTRAS- Here’s what sells the deal. Movies like this, with a moderate cult following, usually end up dumped on a slapped together DVD or 50 movie pack with no extras at all. Sledgehammer actually is packed with features, including two commentaries, one by David Prior and one by the team at Bleeding Skull. Also included are trailers for upcoming Intervision titles, the featurettes Hammer Time and Sledgehammerland, and an interview with Prior. This is a solid package, but the only thing I feel is missing is the “un-slo-motion” version that many fans joke about. Kidding aside, this is a damn fine release for a film that was pretty much only preserved by extreme horror fanatics. That’s dedication. 9/10